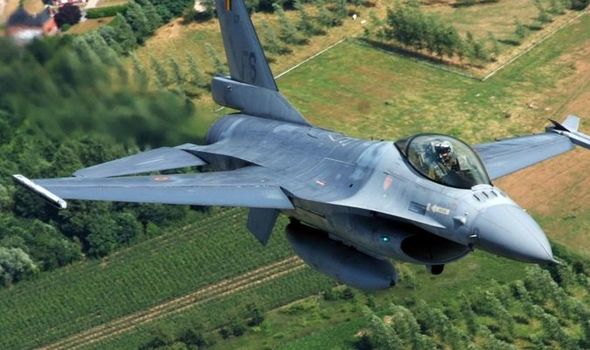 A twitter account called La Poutre d’Istanbul posted: “An F-16 of @BeAirForce had a problem during start-up at Leeuwarden airbase in the Netherlands and the pilot had to eject.

“The plane ended its race in a building of the base causing two injuries.”

Videos on social media showed emergency services surrounding the roads while the people in the plane was checked over.

The plane had been taking part in an international exercise at Leeuwarden military base which is used by the Royal Netherlands Air Force (RNLAF).

The crash happened at the start of the mission in which the F-16 jet was preparing for take-off when the the plane ‘ran wild’, forcing the pilot to eject.

The plane careered down the runway and out of control, before slamming into a building at the airbase.

The reason for the crash is unclear and is still being investigated.