The president cautioned that the United States was years behind in developing a strategy to combat the worsening fires and their underlying causes. 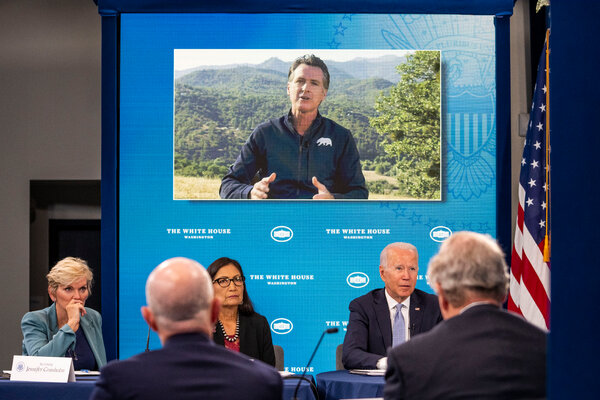 With a record-shattering heat wave suffocating much of the Pacific Northwest and a drought-fueled wildfire season already well underway, President Biden pledged on Wednesday to keep federal firefighters on duty for a longer season, and to increase their pay.

But he cautioned that the United States was years behind in developing a strategy to combat the worsening fires and their underlying causes, including climate change.

“The fact is, we’re playing catch-up,” Mr. Biden said during a virtual meeting with leaders of Western states, adding that he was surprised at the absence of federal attention to the details of firefighting when he came to office. “Right now we have to act, and act fast.”

But many of the proposals Mr. Biden discussed — including a permanent raise for federal firefighters to roughly $15 an hour, early satellite detection of fires and better firefighting equipment — were unlikely to be ready for the wildfire season that has already begun in parts of the West, a senior administration official acknowledged on Wednesday, speaking on the condition of anonymity.

The exception would be some immediate bonuses for firefighters.

Human-caused climate change, combined with continued home construction in fire-prone areas, is making wildfires more frequent and dangerous across the United States. After President Donald J. Trump downplayed both climate change and its link to wildfires, Mr. Biden has sought to show that his administration is grappling with the crisis.

Yet Mr. Biden said there were a few areas where he could act by executive authority, including extending the season for firefighters, so that “seasonal firefighters can stay on the job as long as they are needed.” And he said he was announcing an immediate grant of “fire mitigation funding” to Sonoma County, Calif., which was devastated by fires last year. Sonoma was among the first to apply for the new funding.

Mr. Biden had asked for the briefing on federal and state preparedness for the fire season, similar to what he and his predecessors often receive at the opening of hurricane season.