Sports fans across southern areas of England were warned events could be inundated with heavy downpours this week after the Met Office issued a severe weather warning on Monday. Steven Keates, the senior meteorologist for the Met Office, said “there’s a reasonable chance of rain which could be heavy, at least at times, during the game” in north London. Pockets of rain could continue throughout the week impacting other events including the England Euros game against Germany on Tuesday.

A Met Office yellow weather warning for thunderstorms is in effect on Monday, June 28.

The warning is in force from 12pm to 10pm on Monday.

Predominantly parts of southern England are impacted by the warning where there is a chance of heavy rain and potential for thundery downpours.

Up to 2.4 inches of rainfall is possible in some areas between two and three hours.

Lightning, hail and gusty winds may prove additional hazards in a few locations. 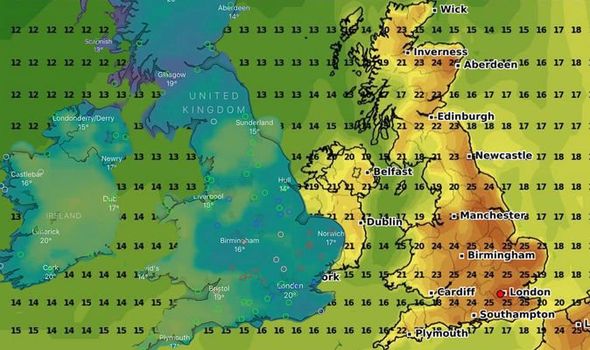 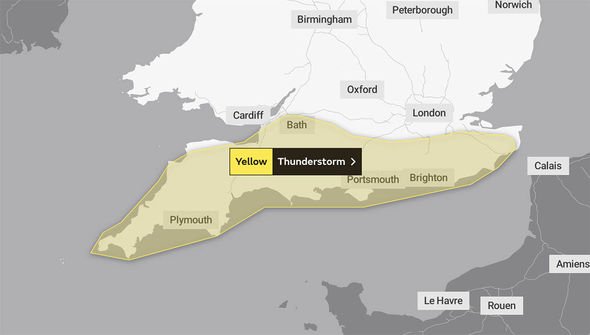 According to the forecaster, the rain is predicted to continue throughout the first half of July.

However, as it nears the middle of next month, there will likely be a split between the southwest and northeast, with southern and western parts seeing some showers, and perhaps longer spells of rain, whilst the best of any dry weather remains across the north and east.

Temperatures are likely to trend above normal, notably across some parts of the northeast.

From mid to late July, temperatures are predicted to reach above average throughout the period, with the possibility of some very warm or even hot spells occurring. 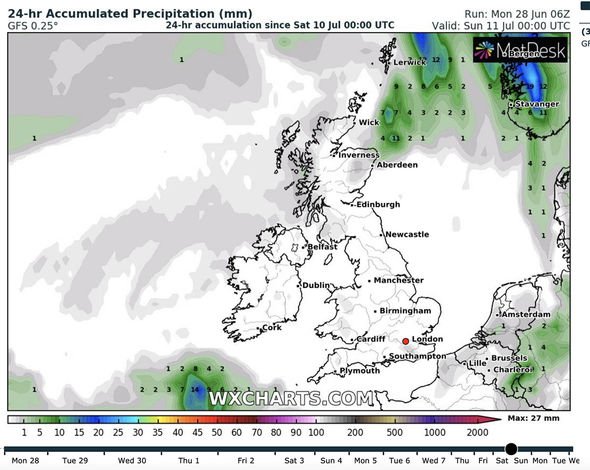 Forecaster WXCharts indicates much of the UK will experience temperatures around 25C in many parts on Tuesday, July 6.

These warm temperatures will continue through to Wednesday, July 7.

The temperature maps from the forecaster indicate highly changeable weather ranging from early teens to mid-20s throughout the first half of July.

The accumulated precipitation map from WXCharts indicates there will be no rain in the 24 hours to July 11, however, there will likely be a smattering of rain across varying parts of Britain up until that time.

The rain is then predicted to return, impacting many areas from July 14. 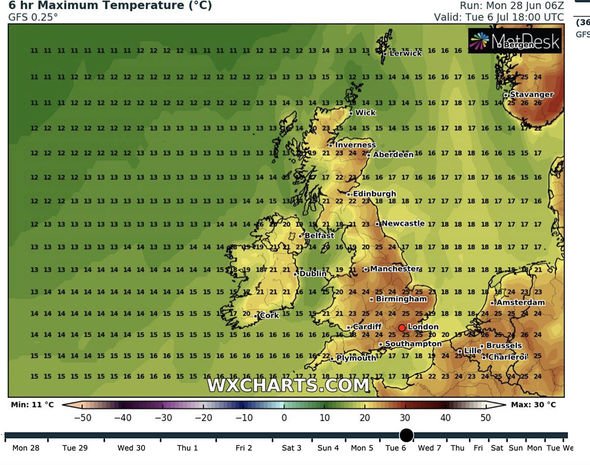 According to Netweather parts of the country will experience warmer conditions this week.

The forecaster suggests western parts will enjoy the best of the sunshine and the warmest temperatures on Wednesday, June 30.

Eastern parts will see more in the way of cloud, with the threat of some showers at times, particularly in the southeast – nearest to that low.

Netweather maps suggest conditions will be changeable in early and late July, but fine weather is likely around mid-July.

Sunshine totals are expected to be a little below normal in parts of the south and west, especially the southwest of Britain, but above normal in northern and eastern Scotland and the eastern side of England. 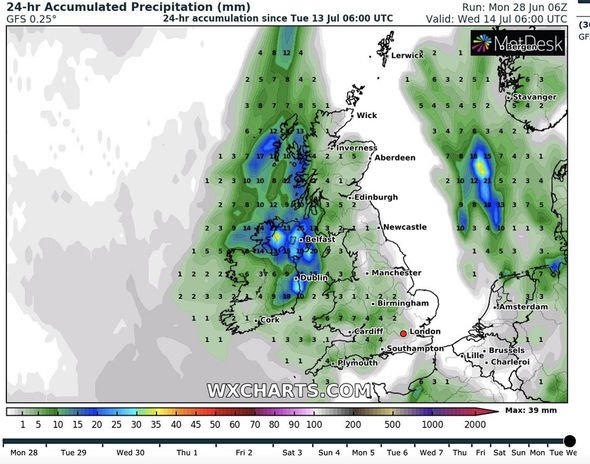 Forecast maps from the Weather Outlook indicate temperatures will be as follows for each region of the UK for the next 30 to 150 days: