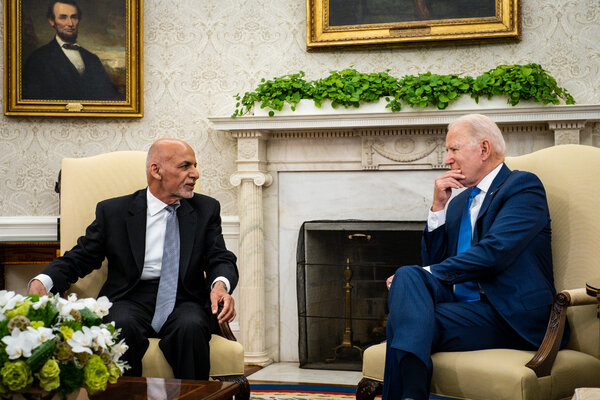 WASHINGTON — President Biden said Friday that the future of Afghanistan was in its own hands, but he promised its president, Ashraf Ghani, that the United States would support the country even after American forces withdraw following nearly 20 years of war.

During a visit to Washington by Mr. Ghani and Abdullah Abdullah, Afghanistan’s chairman of the High Council for National Reconciliation, Mr. Biden said the United States would continue to offer security assistance, as well as diplomatic and humanitarian aid.

But his message was clear: The U.S. military is leaving.

“Afghans are going to have to decide their future, what they want,” Mr. Biden said at the White House. “The senseless violence has to stop.”

His decision to pull out American troops by Sept. 11 is one of the most consequential of his presidency so far, a deeply personal calculation that comes “from the gut,” as one official put it. And despite the worsening security situation, gloomy intelligence reports and the likelihood the White House will face terrible images of human suffering and loss in the coming weeks and months, Mr. Biden has vowed to withdraw regardless of the conditions on the ground.

Those conditions are increasingly dire.

While military planners and intelligence analysts have long had differing assessments on Afghanistan’s prospects, they have come to a consensus that Mr. Ghani’s government could fall in as few as six months, according to officials briefed on the intelligence work. They cite recent setbacks by Afghanistan’s security forces, including the defeat of an elite commando unit.

Still, for Mr. Ghani, the meeting at the White House was a chance to show he still had financial backing from the West, even without a U.S. military presence.

“We are fully satisfied that this decision has been taken in the spirit in which it was offered, which is not abandonment of Afghanistan,” Mr. Ghani told reporters at a news conference afterward. “This is a new chapter in our relationship.”