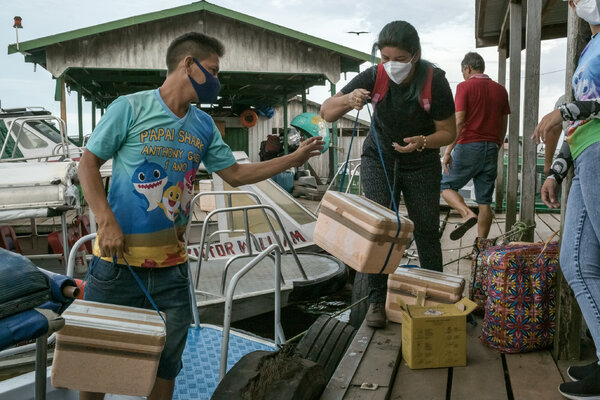 The White House said Wednesday that the United States would send three million doses of Johnson & Johnson’s vaccine Thursday to Brazil, where virus cases and fatalities are surging again with the country’s death toll above 500,000.

Less than a third of the country’s population has had at least one shot, and an average of 74,490 new cases per day were reported in the country in the last week — an increase of 26 percent from the average two weeks ago.

The vaccines, which are set to arrive in Campinas, near São Paulo, are part of President Biden’s pledge to dispatch 80 million doses overseas by the end of the month, a White House official said. The official added that “scientific teams and legal and regulatory authorities” from the United States and Brazil had worked to secure the arrangement.

The shipment to Brazil follows one to Taiwan last weekend: 2.5 million doses of Moderna’s vaccine. Mr. Biden, who has been under intense pressure to increase his vaccine commitments abroad, announced this month that his administration would buy 500 million doses of the Pfizer-BioNTech vaccine and distribute them among about 100 countries over the next year.

Asked last week at a pandemic news conference whether the administration would send vaccines to Brazil, Jeffrey D. Zients, the White House Covid-19 response coordinator, said that the United States was working with other countries on complicated logistical issues, including securing needles, syringes and alcohol pads that would accompany the medicine.

The Johnson & Johnson vaccine, which confers a high level of protection against virus cases, hospitalizations and deaths, has faced sagging demand in the United States. The Centers for Disease Control and Prevention and the Food and Drug Administration in April recommended a pause in its use after reports of a rare blood clotting disorder in a small number of people who had received the vaccine, a decision that state officials said had derailed interest in the shot.

And with manufacturing problems at a Baltimore plant operated by a subcontractor, Emergent BioSolutions, Johnson & Johnson has been able to deliver fewer than half of the 100 million doses it promised the federal government by the end of this month. A little more than half the Johnson & Johnson doses delivered to states so far have been administered, according to C.D.C. data.

Roughly two-thirds of the doses the U.S. is sending to Brazil are from a federal pool that holds vaccines states choose not to order, the White House said. Around a third of them were produced at Emergent and recently cleared by the F.D.A. in a special review of the facility and the doses produced there.

Earlier this month, the F.D.A.cleared around 10 million doses for use in the U.S. or for export, with a proviso that regulators could not guarantee that Emergent had adhered to manufacturing standards.

Last week the agency released another 15 million doses from Emergent. It is still reviewing other batches of the vaccine to determine if they are safe. A decision is expected soon.