Sir Jeffrey Donaldson, the new leader of the Democratic Unionist Party, said the Brexit deal’s protocol to avoid a hard border must be amended to avert the region plunging into chaos. The Lagan Valley MP was the only candidate vying to replace Edwin Boots, who announced his resignation following a party spat after just 21 days in office. Mr Poots was ousted after nominating Paul Givan as Northern Ireland’s first minister in a deal brokered between Sinn Fein and the UK Government over Irish-language legislation.

Sir Jeffrey, Northern Ireland’s longest-serving MP, is expected to be a more reliable partner than his predecessor, who was elected because of his hardline views on Brexit.

Ministers hope to eventually secure the support of the new leader to broker a deal over the controversial post-Brexit border fix.

But in a statement, Sir Jeffrey warned that without an agreement between Brussels and London over the Northern Ireland Protocol a power-sharing deal in the region is unlikely.

He said: “The Northern Ireland assembly is the place where every element of our society is represented. The coalition government is unwieldy, but it ensures every voice is heard. 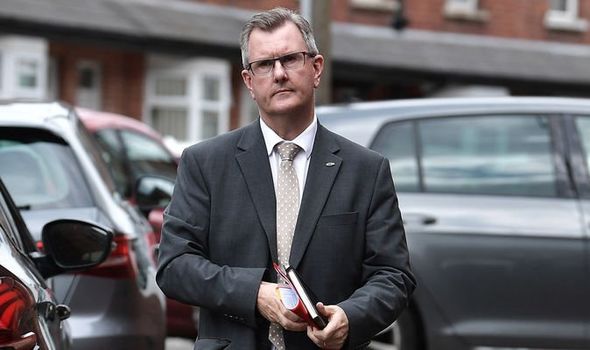 “Such a partnership is how we should move forward. It must be based on respect for each other’s mandate. To that end, I will be speaking with the Prime Minister at the earliest opportunity to emphasise that it is not realistic to expect stability when every unionist representative in the devolved institutions opposes the Northern Ireland Protocol.

“The government and those who claim to be protectors of peace and stability must step up and deal with the Protocol in a manner that respects the constitutional and economic integrity of the United Kingdom.”