We’re covering Tokyo’s decision on spectators at the Olympics, and harsh words for the U.S. from Iran’s new president. 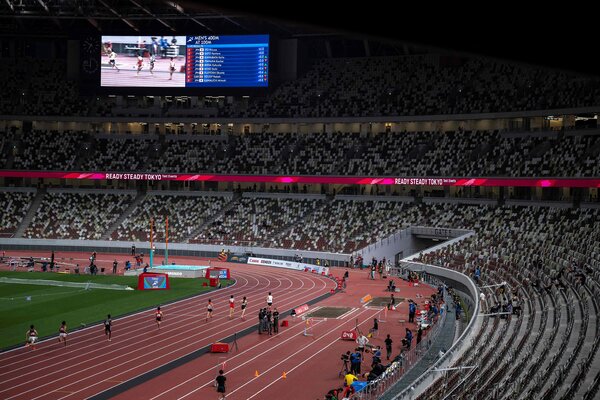 Domestic spectators will be allowed to attend Olympic events in Tokyo this summer, the president of the Games announced on Monday, ending months of speculation that athletes could be deprived of a live audience.

The announcement comes as Japan’s virus case numbers drop and vaccination rates skyrocket. The country is now administering nearly one million doses of the vaccine every day. About 18 percent of the population has received a first dose, and 7.3 percent are fully vaccinated.

Spectators from overseas were barred in March from attending. The International Olympic Committee agreed that crowds would be allowed up to 50 percent of a venue’s capacity, up to 10,000 people. However, if the pandemic situation worsens or if emergency measures are declared by the Japanese government, the Games could be held without spectators.

Those who attend will have to wear masks — and will not be allowed to shout.

U.S. Olympic trial results: The nine-time U.S. Olympic medalist Allyson Felix made her fifth and final Olympics. Michael Norman, who has run the fourth-fastest 400 meters of all time, is also going to Tokyo. Here are others who made it.

China denounced the U.S. for shipping 2.5 million vaccine doses to Taiwan, accusing it of messing with internal affairs.

Afghanistan is grappling with a dwindling oxygen supply amid a surge in cases.

Indonesia will introduce new coronavirus restrictions in response to a rise in cases in the country.

Qatar announced that all fans attending the 2022 World Cup — 1.5 million are expected — must be vaccinated.

Iran will not negotiate with the U.S. over its ballistic missile programs or regional militia forces, Ebrahim Raisi, an ultraconservative elected as Iran’s new president over the weekend, said on Monday.

In his first news conference as president-elect, Raisi also said he would not meet with President Biden. He called for Americans to comply with a 2015 agreement that limited Iran’s nuclear program in return for lifting economic sanctions.

“We emphasize that the U.S. government should be sincere toward its commitments while noting that the regional and missile issues are not negotiable,” he said in a briefing, according to the official Iranian IRNA news service. He also voiced a new idea: that Iran was willing to restore diplomatic ties with Saudi Arabia, which collapsed in 2016. The statement appeared to be part of efforts to build bilateral ties with countries in the region independent of the U.S.

The comments come as the U.S. and Iran hold talks through intermediaries in Vienna about reviving the 2015 agreement.

Officials around the world joined forces to impose sanctions on several senior officials in the government of President Aleksandr Lukashenko of Belarus over the forced diversion of a plane to arrest a journalist.

“We are united in our deep concern regarding the Lukashenko regime’s continuing attacks on human rights, fundamental freedoms and international law,” the U.S., the European Union, Britain and Canada said in a joint statement.

The economic sanctions are expected to be confirmed later this week. The bloc’s foreign policy chief said more than 80 individuals and organizations would be targeted with a ban on travel to the European Union and asset freezes.

Related: Populist leaders in Europe, like those of Hungary, Slovenia and Poland, are increasingly unpopular because of their pandemic responses and heavy-handed policies.

The party of Armenia’s prime minister, Nikol Pashinyan, won a snap election over the weekend that also signaled at least grudging acceptance by voters of a peace settlement negotiated last fall with Azerbaijan.

An artist who secretly filmed thousands of female students on a Chinese university campus and ranked them “from the prettiest to the ugliest” set off a furor after his work was exhibited in a Shanghai museum.

Prime Minister Imran Khan of Pakistan was careful not to criticize China’s treatment of Uyghur Muslims in an Axios interview Sunday night, even though he has been a leading voice against Islamophobia around the world.

Who gets to enjoy the Asi, a gentle stream that runs for a mile through a sunbaked plain in northern Israel? The question has come to symbolize the issues that divide Israeli society, pitting advantaged scions of the country’s founders against a new, educated class descended from a traditionally marginalized group — one eager to maintain its hard-earned assets, one fighting for public access.

Even before the war, Prime Minister Abiy Ahmed appeared bent on breaking the Tigray People’s Liberation Front, which formerly led the central government. He has sought to consolidate power in the federal government and his political party, jailing prominent rivals. The T.P.L.F. and Tigray have openly resisted.

In September, Tigray defied him by going ahead with regional parliamentary elections, which the federal government had ordered postponed because of the pandemic. Ethiopian lawmakers voted to cut funding to the region in October, incensing Tigray leaders.

On the night of Nov. 3-4, T.P.L.F. forces attacked a federal military base in Tigray. The T.P.L.F. has said it struck preemptively, as federal forces prepared an assault. Hours later, Abiy ordered a military offensive, and internet and phone communications were shut down. Eritrea’s authoritarian government joined forces with Abiy.

Federal forces and their allies quickly seized control of Tigray’s capital, Mekelle, and other main towns, but the T.P.L.F. and its armed supporters fled to rural and mountainous areas, where sporadic fighting has continued.

The government has restricted journalists in the region, making it hard to gauge the situation. Humanitarian agencies have warned that the conflict had afflicted 350,000 people with famine. The conflict has shattered the halo of Abiy, who was awarded the Nobel Peace Prize in 2019.

Honey-soy braised pork is a slow-cooker main dish that’s truly “set it and forget it.”

Take a trip to the Italian coast in Pixar’s “Luca,” a charming sea-monster story.

The Irish entertainer Graham Norton is known for his freewheeling talk show, but in his novel “Home Stretch” he explores what it’s like for a gay man to return to his home and find both it and himself wholly transformed.

P.S. Tiffany Harness, a longtime editor at The Washington Post, is joining The Times’s Washington bureau as our new foreign policy editor.

The latest episode of “The Daily” is on a crucial U.S. Supreme Court decision for voting rights.

You can reach Melina and the team at briefing@nytimes.com.