Ahead of Ethiopia’s general election on Monday, Prime Minister Abiy Ahmed has been laying out his grand ambitions for the country. He wants it to be “comfortable for all Ethiopians,” he recently told a TV interviewer, “where every Ethiopian moves around relaxed, works and prospers.” The country, he said, should be one whose “sovereignty is respected and feared, and whose territorial integrity is preserved.”

He’s going about it in a horrifying way. For eight months, Mr. Abiy’s government has been waging brutal war on one of its regions, Tigray, killing thousands of people, displacing over two million and creating a disastrous famine. Comfort, relaxation, work and prosperity could not be further away. Far from respect, the act has brought international outcry. And as for territorial integrity, the war effort has relied on Eritrean soldiers, whom Isaias Afwerki, the country’s leader, refuses to withdraw.

But the war in Tigray, though exceptional in its brutality, is not an isolated case. Since he came to power on a wave of enthusiasm in 2018, Mr. Abiy has consistently demonstrated his tendency to ruthlessly centralize power. Political opponents, set against the creation of a new ruling party in Mr. Abiy’s image, have been sidelined, even jailed. Many have been shocked by this behavior — after all, Mr. Abiy was awarded the Nobel Peace Prize in 2019 — but, in fact, he’s following a coherent philosophy and strategy. Elaborately explained in his book “Medemer,” a word coined by the prime minister to mean togetherness, the approach seeks unity among the people of Ethiopia and cohesion in its state.

And it’s tearing the country apart.

For the disasters he’s unleashed, look no further than Tigray. Since Mr. Abiy announced the assault in November as a “law enforcement” mission, it has metastasized into all-out war. Numerous corroborated reports have revealed the horrific scale of violence, including multiple massacres, endemic sexual violence and a famine that threatens the lives of more than 350,000 Tigrayans. While the world has yet to learn the real death toll, the region, with a population of more than six million, has been decimated. And there is no end in sight. 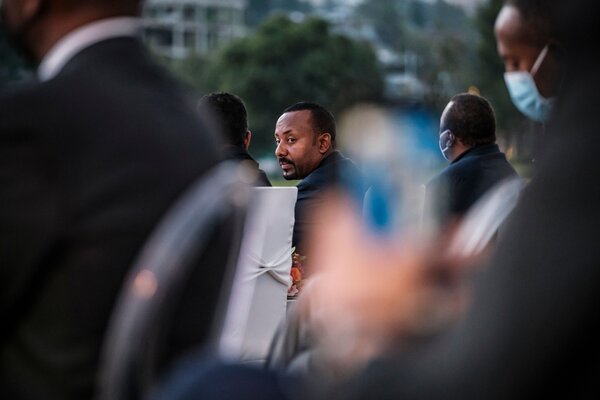 The war, which has become a gruesome byword for ethnic cleansing, is Mr. Abiy’s punishment for Tigray’s refusal to accept his authority. (The precursor to the assault was the region’s decision, in defiance of the government, to hold an election in September.) But Tigray is not alone in paying the price for challenging Mr. Abiy’s centralizing moves. In Oromia, where he’s from, Mr. Abiy has overseen a brutal crackdown — responsible, in 2019 alone, for over 10,000 arrests and a number of extrajudicial executions — in the name of countering a rebellion led by the Oromo Liberation Army, an armed opposition group.

After the assassination of a popular Oromo musician, Hachalu Hundessa, in June of last year, repression became yet more violent. In protests against the killing, whose perpetrators are still unknown, at least 123 people were killed, including 76 by security forces. In the aftermath, numerous opposition politicians — including Mr. Abiy’s former ally, Jawar Mohammed — were jailed. In response, the two main opposition parties withdrew from Monday’s election, leaving Mr. Abiy’s party to run the country’s largest region all but uncontested.

Against this baleful backdrop, the election — which is expected to coronate Mr. Abiy and his party, cementing his power — is distinctly underwhelming. Not only is Tigray completely excluded, but logistical difficulties have also hampered the voting process. After problems with security, voter registration, defective ballots and legal challenges, the election has been postponed to September in two other regions as well as in dozens of constituencies. And around half a million internally displaced Ethiopians are unlikely to be able to vote.

It’s a far cry from the free and fair election Mr. Abiy promised when he became leader three years ago: The much-vaunted transition to democracy is not very evident. Far from supplying legitimacy to the government and stability to the country, the election — boycotted by opposition parties and undertaken amid a war — is likely to pull Ethiopia further apart, to calamitous effect.

But that doesn’t seem to bother Mr. Abiy. Ignoring international entreaties to end the war in Tigray and agree to an inclusive political settlement, he is instead determinedly preparing to govern an Ethiopia neither respected nor whole. His legacy, at least, is secure. Mr. Abiy will forever be the Nobel Peace laureate who refused to give peace a chance.

Tsedale Lemma (@TsedaleLemma) is the founder of the Addis Standard, an English-language monthly magazine based in Ethiopia.