Israel has launched airstrikes in Gaza less than a month after a ceasefire agreement was reached.

The move, also the first strikes under the new Israeli government, came after incendiary balloons were launched from Palestinian territory.

The balloon launches appeared to be in retaliation for a march on Tuesday in East Jerusalem where Jewish nationalists celebrated Israel’s capture of the area in 1967. Palestinians consider the march a provocation and it sparked threats of action from Hamas.

Israel said the balloon launches had caused 20 fires in open fields in communities near the Gaza border.

“The attack was carried out in response to the inflating of incendiary balloons into Israeli territory,” it added.

“The terrorist organization Hamas is responsible for what is happening in the Gaza Strip and will bear the consequences of its actions.

“The IDF is prepared for all scenarios, including the resumption of hostilities, in the face of continued terrorist operations from the Gaza Strip.”

Jerusalem is claimed by both sides – Israel regards the city as its capital, having occupied the east in the 1967 war and annexed it in 1980.

But Palestinians want East Jerusalem to be the capital of a future state that would include Gaza and the West Bank.

A spokesman for Hamas said on Tuesday that Palestinians would continue their “brave resistance and defend their rights and sacred sites” in Jerusalem.

The renewing of tensions provides a challenge for Israel’s new prime minister Naftali Bennett, a nationalist who presides over a diverse but delicate coalition government.

The government was sworn in on Sunday and one of the first problems was whether to cancel the Israeli march – there were concerns it would spark tensions but also that cancelling would be seen as giving in to Hamas. 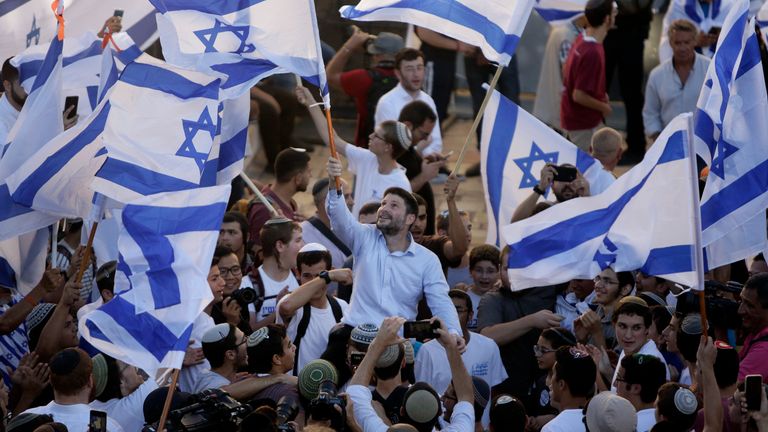 But not every party in the coalition agreed with the decision to let the march go ahead.

Mansour Abbas’s Raam party is the first Arab faction to be part of an Israeli coalition and he said the march should have been cancelled.

He described it as “an attempt to set the region on fire for political aims”, adding: “I call on all sides not to be dragged into an escalation and maintain maximum restraint.”