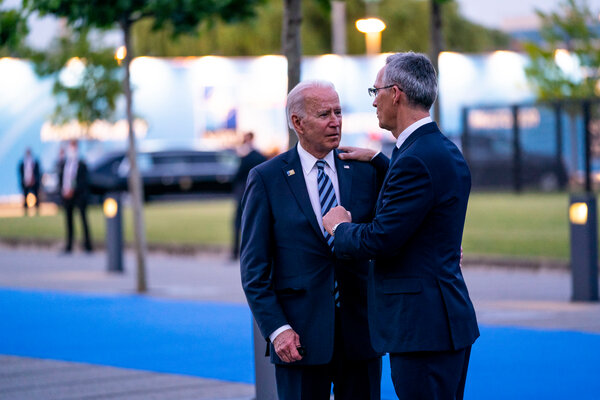 NATO leaders locked arms against China and Russia at their summit on Monday, as President Biden reaffirmed his commitment to the alliance. China’s growing influence and military might “present challenges,” the 30-nation alliance said.

This escalation of rhetoric from summits past reflected a new concern over how China intends to wield its rapidly growing military might and offensive cybertechnologies in the coming years.

NATO countries warned that China increasingly posed a global security problem, as well, signaling a fundamental shift in the attentions of an institution devoted to protecting Europe and North America, not Asia.

Putin: At the end of the summit, Biden discussed his approach to the Kremlin. “What I’ll convey to President Putin is that I’m not looking for conflict with Russia but that we will respond if Russia continues its harmful activities,” said Biden, who will meet with Vladimir Putin on Wednesday in Geneva. “And we will not fail to defend the trans-Atlantic alliance or stand up for democratic values.”

Prime Minister Boris Johnson of Britain announced on Monday that he would postpone by four weeks the easing of the latest lockdown in England, what British tabloids called “freedom day,” originally scheduled for June 21, after a spike in cases of the highly transmissible Delta coronavirus variant.

Restaurants and pubs in England will still have to observe social-distancing rules indoors and limit capacity, and nightclubs and theaters will remain closed. The decision will be reviewed in two weeks.

Britain’s vaccination campaign is among the most successful in the world, with about four-fifths of adults having received at least one shot. But those yet to receive their second dose remain susceptible to the Delta variant, more so than to earlier versions of the virus, scientists said.

By the numbers: Overall new cases in Britain are averaging about 8,000 per day and are doubling every week in the worst affected areas. Hospital admissions have begun rising.

In a rare interview with Times reporters, Shi Zhengli, a top Chinese scientist who works at the Wuhan Institute of Virology, denounced as baseless suspicions that the virus had originated in the lab. “How on earth can I offer up evidence for something where there is no evidence?” she said.

In the first days of Israel’s fragile new coalition government, ministers announced plans to repair Israeli ties with U.S. Democrats and the Jewish diaspora, investigate a stampede at a holy Jewish site on Mount Meron in April that killed 45 and permit a contentious far-right march through Jerusalem.

The initiatives highlighted the complexities and contradictions of the coalition, which is an unlikely alliance of the hard right, the left and the center, as well as — for the first time in Israeli history — an independent Arab party.

The far-right march, originally planned for last month, was among the reasons Hamas cited for firing rockets toward Jerusalem on May 10, setting off an 11-day air war between the militant group and Israel. The group vowed to respond if the march was allowed to go ahead.

Quotable: “The support of Christian evangelicals and other groups is important and heartwarming, but the Jewish people are more than allies, they are family,” the new foreign minister, Yair Lapid, said in his first speech. “Jews from all streams — Reform, Conservative and Orthodox — are our family.”

Related: After a year of protests outside Balfour, the prime minister’s house, Israelis are debating what role they played in Benjamin Netanyahu’s downfall.

At the Group of 7 summit, Prime Minister Boris Johnson found himself dodging questions about the delayed reopening of Britain’s economy and trying to play down an ugly clash with the E.U. over Northern Ireland.

The Vatican warned conservative American bishops not to deny communion to Catholic politicians supportive of abortion rights, including President Biden.

Prosecutors in France said on Monday that they had dropped a high-profile rape investigation of Olivier Duhamel, a prominent political scientist, because the statute of limitations had expired.

An American father and son pleaded guilty in Tokyo on Monday to helping Carlos Ghosn, the former Nissan chief, flee Japan as he faced trial on charges of financial wrongdoing. Above, a vehicle transporting Michael Taylor and his son Peter Taylor for their trial at the Tokyo District Court.

Unusual activity at the Taishan nuclear power plant in China has drawn international attention, as two French companies involved in the plant acknowledged problems on Monday but said they could be handled safely. Officials at the power plant said no leak had been detected.

After more than two decades on the soccer sidelines, Scotland’s Tartan Army is back.

“We made the least bad decision,” one Denmark soccer player said of the choice to continue a Euro 2020 match after a star of the team, Christian Eriksen, collapsed and went into cardiac arrest.

Hamane Niang, basketball’s highest-ranking international official, stepped aside amid an investigation into sexual abuse in the sport.

Rush hour has long ruled our lives, our cities, our tax dollars. But if more of us continue to work remotely, it won’t have to, freeing up space, resources and desire for bike lanes and better bus service, which could take even more cars off the roads.

How to buy a work of art

Our T magazine editors compiled a sweeping guide to buying artwork, based on interviews with gallery owners, collectors and artists. Here’s their top advice for novice collectors.

“Visit a lot of galleries and museum shows and meet with artists. I guess if I were to pick one word, it would be ‘exposure.’ And you never should limit yourself to art that you think you’re going to like.” — Ann Schaffer, patron and collector

“I believe in doing a bit of homework. Educating yourself and reading up about the kind of art you’re interested in is really essential.” — Denise Gardner, collector and board chair-elect at the Art Institute of Chicago

Go to a gallery and talk to people you meet.

“I don’t know any etiquette other than human kindness.” — Alexis Johnson, partner at Paula Cooper Gallery

“I like people who tend to be very open: ‘This is what I think I like, this is what I don’t know, this is where I’m starting.’” — Bridget Finn, co-founder of Reyes | Finn gallery

“You have to be sincere if you’re making inquiries and you’re asking about someone’s work, or you’re thinking about acquiring it. This is someone’s life’s work. This might be $1,000 to you, but this is someone’s soul.” — Jessica Wessel, lawyer and collector

Try this fresh take on potato salad with a garlicky yogurt dressing, plus cucumbers and olives for surprising textures and tastes.

Historical fiction is having a renaissance, thanks to books from authors like Hilary Mantel, Colson Whitehead and Kaitlyn Greenidge.

P.S. Anatoly Kurmanaev, who has spent most of his journalistic career in Venezuela, joins our Mexico City bureau as a correspondent.

The latest episode of “The Daily” is on Apple’s relationship with China.