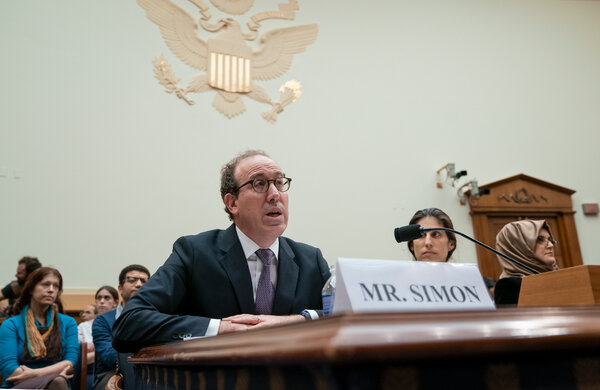 After 15 years as the executive director of the Committee to Protect Journalists, Joel Simon said on Wednesday that he would step down by the end of the year.

Founded in 1981, the Committee to Protect Journalists is a nonprofit organization that defends the rights of journalists around the world. Mr. Simon, 56, joined in 1997 and has been in charge since 2006.

In an interview, Mr. Simon said that, when he joined the group, he was hopeful about the ability of journalists to do their jobs safely. But after more than three decades of helping to secure the releases of hundreds of imprisoned or detained journalists around the world, he has lost some of that optimism.

“Governments are increasingly taking aggressive action toward journalists, and there are very few consequences,” Mr. Simon said. “During the Trump administration, we saw a connection in governments appropriating ‘fake news’ and use it to justify imprisoning journalists. We’ve also seen governments brazenly use violence.”

As evidence of “violent and repressive forces” that have chilled news coverage, Mr. Simon cited the 2018 assassination of the Washington Post columnist Jamal Khashoggi, a writer who was critical of Crown Prince Mohammed bin Salman of Saudi Arabia and whose murder was approved by him, according to a recent United States intelligence report; and the recent forcing down of a plane carrying a dissident journalist, Roman Protasevich, by President Aleksandr G. Lukashenko of Belarus.

A threat to journalists in the United States was aggressive policing during demonstrations, Mr. Simon added.

“When journalists get arrested at protests in the United States, those images echo around the world and they send a message to so many places that this is the way police behave even in democratic countries,” he said. “And therefore, arresting journalists at protests in Moscow or covering protests in Myanmar, which we’re seeing now, is less shocking and generates less attention.”

Kathleen Carroll, the committee’s board chair, will lead the search for Mr. Simon’s successor, along with the executive search firm Spencer Stuart.

“Autocrats who feel they can kill people and harassment through technology and monitoring through technology — all of that is a new threat,” Ms. Carroll said. “Whoever is going to get this job needs to be able to think ahead about where new threats will be coming from and how to organize the staff and resources.”