Vaccines alone won’t save the country. 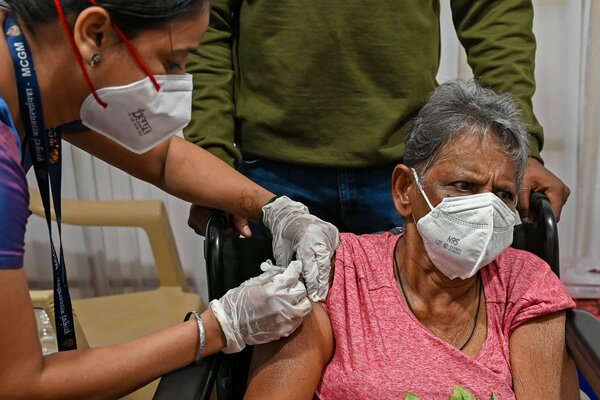 Dr. Jameel is a virologist.

NEW DELHI — As of Tuesday, India had over 23 million reported cases of Covid-19 and more than 254,000 deaths. The real numbers may be much higher, as the country reported an average of more than 380,000 new cases per day in the past week.

As a virologist, I have closely followed the outbreak and vaccine development over the past year. I also chair the Scientific Advisory Group for the Indian SARS-CoV2 Consortium on Genomics, set up by the Indian government in January as a grouping of national laboratories that use genetic sequencing to track the emergence and circulation of viral variants. My observations are that more infectious variants have been spreading, and to mitigate future waves, India should vaccinate with far more than the two million daily doses now.

In India the virus was mutating around the new year to become more infectious, more transmissible and better able to evade pre-existing immunity. Sequencing data now tells us that two variants that fueled the second wave are B.1.617, first found in India in December, which spread through mass events; and B.1.1.7, first identified in Britain, which arrived in India with international travelers starting in January. The B.1.617 variant has now become the most widespread in India.

On Monday the World Health Organization designated B.1.617 a variant of concern. When tested in hamsters, which are reasonable models for human infection and disease, B.1.617 produced higher amounts of virus and more lung lesions compared with the parent B.1 virus. Global data shows the B.1.617 variant to be diversifying into three sub-lineages. In a preliminary report posted on Sunday, British and Indian scientists found the B.1.617.2 variant in vaccine breakthrough infections in a Delhi hospital.

With these variants circulating through India’s still mostly unvaccinated population, public health officials here are trying to determine when the second wave might peak, how big it will be and when it will end.