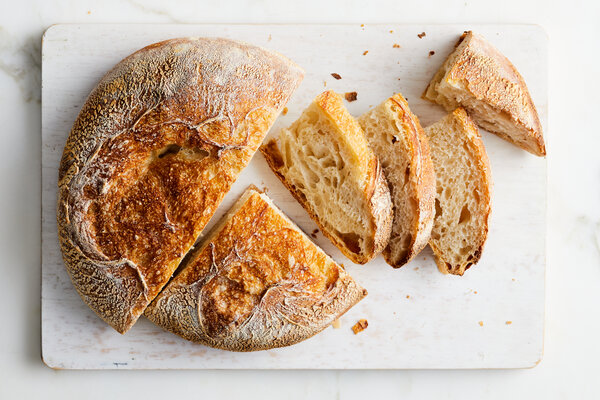 Good morning. J. Kenji López-Alt is in The Times this week with a lengthy and fascinating article about one of the most influential recipes ever published in The Times, for Jim Lahey and Mark Bittman’s no-knead bread. “This was the recipe that democratized bread-baking,” Peter Reinhart, the author of “The Bread Baker’s Apprentice,” told him.

Kenji’s introduced an updated recipe for the bread (above), along with ones for a low-knead bread and a low-knead sandwich bread. I hope you’ll give all three of them a try this week, and thrill to their deliciousness.

As for dinner, I’m liking the idea of this savory-sweet, sesame-soy tteokbokki, with vegetables and optional meat, that’s a take on a recipe from the Korean royal court during the Joseon dynasty.

Or maybe this coconut fish and tomato bake, a simple, remarkably flavorful sheet-pan meal. (Speaking of sheet pans, take a look at this recipe for porchetta-inspired chicken with artichokes and herbs.)

And the greens we’re starting to get where I stay are so incredibly vibrant and delicious that it can only mean it’s time once again to make Via Carota’s insalata verde, one of the world’s best green salads. But if the chill’s still in the air around you, maybe these cheesy cauliflower toasts would suit you better, or this roasted salmon with toasted sesame slaw.

There are thousands and thousands more recipes just like that waiting for you on New York Times Cooking. Go browse among them and see what you discover. Save the recipes you like. Rate the recipes you’ve cooked. And leave notes on them, if you’ve discovered something about them that you’d like to remember or alert to your fellow subscribers.

Yes, you need to be a subscriber to do all that. Subscriptions support our work and allow it to continue. I hope, if you haven’t already, that you will subscribe to New York Times Cooking today. Thanks.

We are here to help should something go wrong along the way. Just write: cookingcare@nytimes.com. Someone will get back to you, I promise. (You can always escalate matters by writing to me: foodeditor@nytimes.com. I read every letter sent.)

Now, it has nothing to do with foraged ramps or purchased Honeycrisps, but I’ve listened to the indie songwriter Wallice’s new single, “Hey Michael,” approximately 300,000 times in the last week or so.

Anyone interested in fly fishing or curious how the sport could possibly be of interest to anyone should hop to David Coggins’s excellent “The Optimist: A Case for the Fly Fishing Life.” (And here is Coggins now, fishing with Charles McGrath in The New Yorker.)

I can’t quite get past the dark raininess and slow pace, but Gabriel Byrne is magnetic as usual in the British crime drama “Quirke,” from the BBC.

Finally, if you’re not in New York, or if you are in New York but not yet up to hanging out in public with socially distanced strangers, you can spend some time with the virtual exhibit of Alexander Calder’s work at the Museum of Modern Art. Do that, cook a lot, and I’ll be back on Friday.