The BBC Weather meteorologist noted Monday will start on a dry note before the persistent wall of rain begins pushing into the UK mid-morning. Carol Kirkwood said wet conditions will affect the majority of the country, with some areas also set to experience wintry rainfall. Ms Kirkwood said: “Low pressure is coming from the west, it’s introducing all this rain and also gusty winds.

“But it’s a bright and relatively dry start as we push further east.

“However, the low pressure is going to continue to come in, bringing some heavy and also persistent rain drifting eastwards, clearing Northern Ireland but the wind will also be a feature in the weather today, particularly in southern areas. Inland, we’re looking at gusts of 40 to 50mph.

“Around the coast of Wales and southern England more likely 50mph to 60mph.”

Eastern areas will be last to see the rain on Monday and temperatures will remain mild. 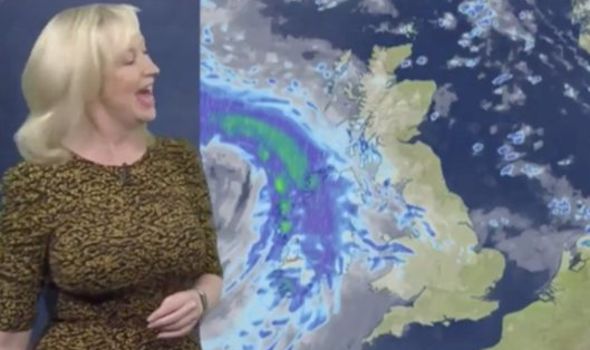 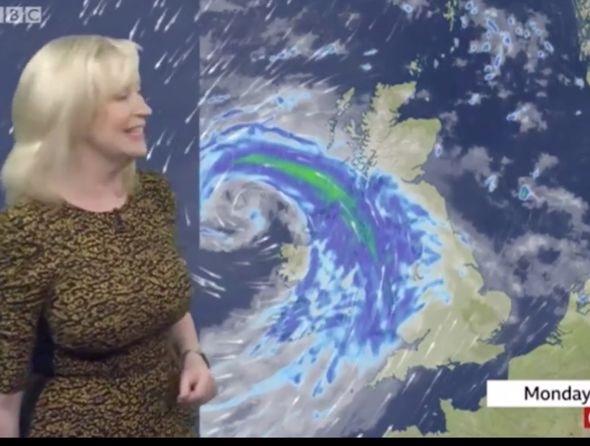 The BBC forecaster continued: “Rain not getting into the far east until later, this is where we’ll see 12C and across the far north of Scotland, we’ll also see some sunshine with a few showers.

“But some showers above 500m in the Highlands could well be wintry and we could also see some of that in the southern uplands and the tops of the Pennines as well.

“One consolation is that the pollen levels are low to moderate. We’re getting into the grass pollen season as well of course the tree pollen.

“Through this evening and overnight, there goes the rain. We’ll have a wrap-around conclusion, still some showers piling in, the snow level drops to about 300m but most of us will stay above freezing.” 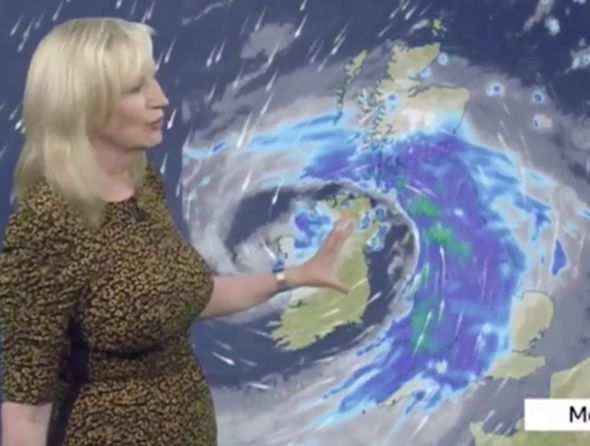 After a rather frosty April, the BBC Weather long-range forecast noted conditions will remain unsettled for the early days of May as well.

The BBC forecast read: “The second half of the month should see temperatures further moderate, with some early signals for a warm-up toward the end of May.

“However, this would also come with some wetter weather too as high-pressure shifts away to the east.”

The area of high-pressure forecast to come in later in the month will be the result of “unusually warm sea surface temperatures” promoting high-pressure development around the Azores. 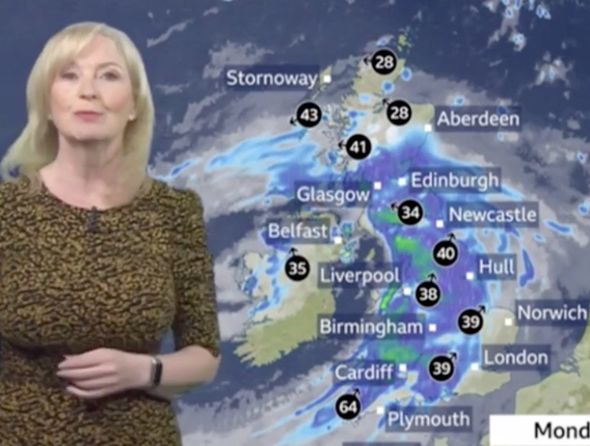 The BBC long-range forecast added: “Our computer models are not having a very successful time forecast the long-range pattern this month, so we are leaning a bit more on the historical analogues.

“These are statistical analyses of previous years with similar large-scale weather patterns to what we are seeing now.

“Many of these historical analogues suggest high pressure will have a frequent presence in West Europe, but they differ on exactly where and how extensive it will be.

“Temperatures will likely moderate and even begin to warm up as there are some encouraging signals for the high to finally shift eastwards towards the end of the month. This would also come with some wetter weather as low pressure develops to the west of Ireland.”

It added: “The main risk for this forecast, with perhaps a 35% chance of developing, is that colder air continues to feed in from the north with a more unsettled pattern returning later in the month.”