NEW YORK (Reuters) – The dollar slumped to a six-week low against other major currencies on Monday as markets sorted out the plunge in U.S. Treasury yields last week after the Federal Reserve reiterated that any spike in inflation is likely to be temporary.

Improved risk sentiment as shown by the rally in global stocks to record highs weighed on the greenback.

Bitcoin stabilized after losses from Sunday, when it plunged as much as 14% to $51,541, which a report attributed to news of a power outage in China.

The dollar index, which tracks the greenback against major currencies, fell 0.5% to 91.159, continuing a downtrend that started on March 31.

The greenback’s weakness was pronounced across the board early on Monday, with the currency hitting multi-week lows against major peers in the G10 group of currencies: the Japanese yen, the Swiss franc, the Australian dollar and the New Zealand dollar, and the euro.

“Indeed, the USD rally is all but distant memory by now and the currency’s underperformance seems to reflect the apparent divergence in the outlook between the slumping UST yields and the rather perky bond yields elsewhere,” said Valentin Marinov, head of G10 FX research at Credit Agricole.

“This is almost the exact opposite of the moves we saw in March,” Marinov said.

The euro rose above $1.20 for the first time in more than six weeks, touching a high of $1.2048 before easing off in the morning in New York to $1.2022. The European Central Bank meets on Thursday with internal divisions over the pace of bond-buying, extended COVID-19 lockdowns and potential delays to the EU recovery fund forming the backdrop.

The market is in a period of consolidation in U.S. yields and the dollar exchange rates, according to Masafumi Yamamoto, the chief currency strategist at Mizuho Securities in Tokyo.

Fed Governor Christopher Waller said on CNBC on Friday that the U.S. economy “is ready to rip” as vaccinations continue and activity picks up, but a rise in inflation is likely to be transitory, echoing comments from other U.S. central bank officials, including Chair Jerome Powell, over the past week.

“With liquidity still abundant, we are going to hear more about the FX carry trade – which thrives in a low volatility environment,” said Chris Turner, global head of markets and regional head of research for UK and CEE at ING.

MSCI’s emerging market currency index hit its highest level in a month and last traded 0.15% higher on the day.

Bitcoin was last at $56,265, flat for the day after plunging on Sunday.

Data website CoinMarketCap cited a blackout in China’s Xinjiang region, which reportedly powers a lot of bitcoin mining, for the selloff.

Despite recent weakness, the world’s most popular cryptocurrency remains up nearly 100%, after more than quadrupling last year.

How Child Care Went From ‘Girly’ Economics to Infrastructure 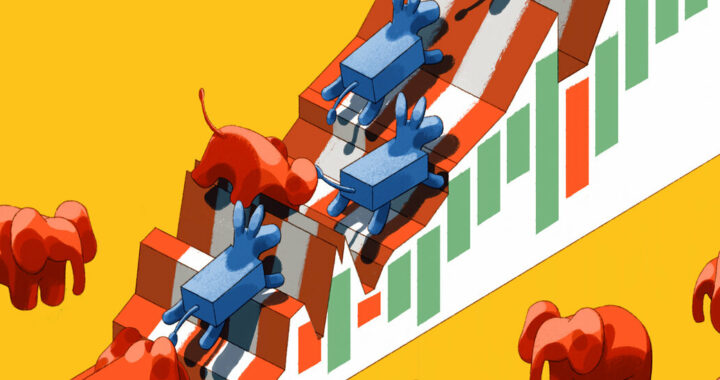 The Stock Market Loves Biden More Than Trump. So Far, at Least.