WASHINGTON — After President Biden abandoned a campaign promise to establish a police oversight commission during his first 100 days in office, administration officials have provided few details about how far he will go to combat racism in policing.

On Tuesday, Mr. Biden added little clarity when asked what he could offer on the matter of police overhaul: “A lot,” he answered during a meeting with several members of the Congressional Black Caucus. “And I will tell you guys later.”

The brief response came against the backdrop of another fatal police shooting of a Black man in Minnesota and renewed questions about what civil rights advocates could expect from an administration that promised swift action but so far has been slow to deliver.

As a presidential candidate, Mr. Biden had called for a national commission to address policing issues after George Floyd, a 46-year-old Black man, died after being pinned under three police officers in Minneapolis in May. The killing spurred nationwide protests and a sweeping police reform bill that bears his name.

But Susan E. Rice, the director of the Domestic Policy Council, said on Monday that such a commission “would not be the most effective way to deliver on our top priority in this area.”

Instead, the administration has embraced a piece of legislation, named for Mr. Floyd, that would combat racial discrimination in policing but, given the slim majority held by Senate Democrats and the amount of Republican opposition, is unlikely to become law.

Passed by House Democrats in March, the bill would address policies that are at the center of the debate over race and policing. It would ban chokeholds and eliminate existing protections under qualified immunity, which shields officials who have been accused of violating others’ constitutional rights. It would also create a national registry to track police officers who have engaged in misconduct.

The decision to focus instead on legislation came as several high-profile cases of police violence against Black men prompted renewed calls for reform.

Derek Chauvin, the police officer who knelt on Mr. Floyd’s neck for more than nine minutes, is standing trial for murder. Protests have again erupted in the Minneapolis area after Daunte Wright, a 20-year-old Black man, was shot in the chest and killed by a police officer during a traffic stop on Sunday.

A third episode, in which video surfaced of a uniformed Black Army lieutenant held at gunpoint and pepper-sprayed during a traffic stop, is under investigation by the attorney general of Virginia.

The violence has caused Democrats in the progressive wing of Mr. Biden’s party to revisit calls to defund police departments across the country. Representative Rashida Tlaib, Democrat of Michigan, equated Mr. Wright’s killing with “government-funded murder” and described policing in the United States as inherently racist.

Jen Psaki, the White House press secretary, said that the president, who as a candidate opposed calls to defund the police, did not share Ms. Tlaib’s view. Instead, she pointed to a host of early executive orders as evidence that he sees racial equity as a central tenet of his presidency.

“He is a strong supporter of working through legislation that could put in place permanent reforms,” Ms. Psaki said on Tuesday. “Hopefully that gives some reassurance to the public about his commitment.” 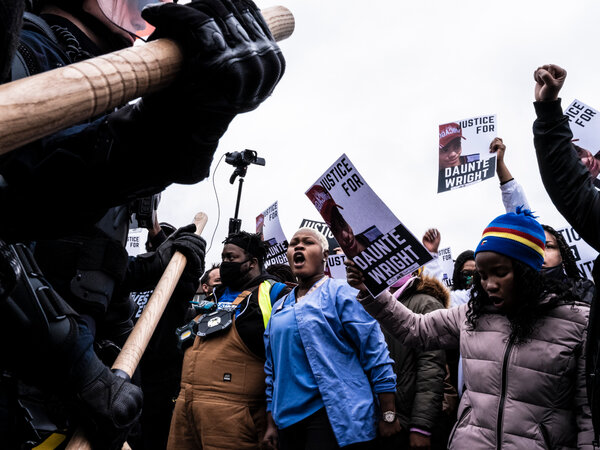 Inimai Chettiar, the federal director for the Justice Action Network, which consulted with the Biden campaign on criminal justice measures, said she hoped that the administration was prepared to negotiate on the legislation rather than put its full backing behind the bill passed by House Democrats.

“We just hope and have been urging them that in that process they take a realistic look on that legislation and what they need to do to amend it to bring it to a point where it can pass,” she said. “We suggest they do something that’s more pared down.”

During his campaign, Mr. Biden also pledged to restore the use of consent decrees, a court order negotiated between federal and local officials that the Justice Department for years used to pressure police departments. The Trump administration largely backed away from the practice when Jeff Sessions, President Donald J. Trump’s first attorney general, curtailed their use before his departure in 2018.

The president also vowed to bolster the Justice Department office that issues grants to police departments with a requirement that it use funds to ensure diversity within police ranks.

“They have carrots, they have funding they can control to try to encourage certain behaviors in police departments, encourage them to seek to find ways of reforming themselves before they have it do it to them by something like a consent decree,” said Kristy Parker, who spent 15 years in the civil rights division of the Justice Department.

With a set of nascent campaign promises, Mr. Biden and his advisers have relied on the continued support of civil rights groups as they urge calm after the shooting of Mr. Wright.

On Wednesday, Mr. Biden will deliver virtual remarks at a convention held by the National Action Network, a civil rights nonprofit founded by the Rev. Al Sharpton. He is not expected to focus on promoting the policing bill.

“We have so much work to do, from criminal justice and police reform, to addressing health disparities and voting rights,” the president will say, according to a copy of his remarks provided to The New York Times.

Mr. Biden, who won the presidency in no small part by vowing to prioritize the concerns of Black voters — “you’ve always had my back, and I’ll have yours,” he said during his election victory speech — has amassed good will from civil rights leaders. Mr. Sharpton said in an interview that he was cautiously hopeful that the president would deliver on his promises.

“There’s nothing equivocating about him,” Mr. Sharpton said of Mr. Biden, “which is why he’s built up a certain kind of relationship” with the civil rights community, “even though we want to push the envelope a little.”

Wade Henderson, the president of The Leadership Conference, said in a statement on Tuesday that he supported the administration’s decision to step back from promises of a police commission.

“A national policing commission would have no doubt been interpreted as a delay tactic and undercut the urgency of this issue,” he said. “President Biden is showing the exact type of leadership we need by forgoing a commission and instead putting his backing behind critically important legislation with meaningful actions.”

Still, the political headwinds facing the police reform bill are significant. Recent polling shows that Americans are split on how far police overhaul efforts should go, and public trust in the police remains relatively split along racial lines.

Democrats almost certainly lack the Republican votes needed for the bill to pass the Senate in its current form. They also face opposition in their own ranks on the prospect of eliminating the legislative filibuster, which would lower the threshold for Senate passage from 60 votes to a simple majority.

But Mr. Biden’s congressional allies, including Representative Karen Bass, Democrat of California, have signaled their willingness to work with Senate Republicans, including Tim Scott of South Carolina, whose more modest reform proposal last year was blocked by Democrats.