The ship, called Ever Given, ran aground in the narrow shipping channel around 7.40am on Tuesday, according to reports.

Several tugs have surrounded the vessel, operated by transport company Evergreen Marine, in a bid to move it.

An official reportedly told local news outlet Cairo24 that the process of moving it could take up to two days. 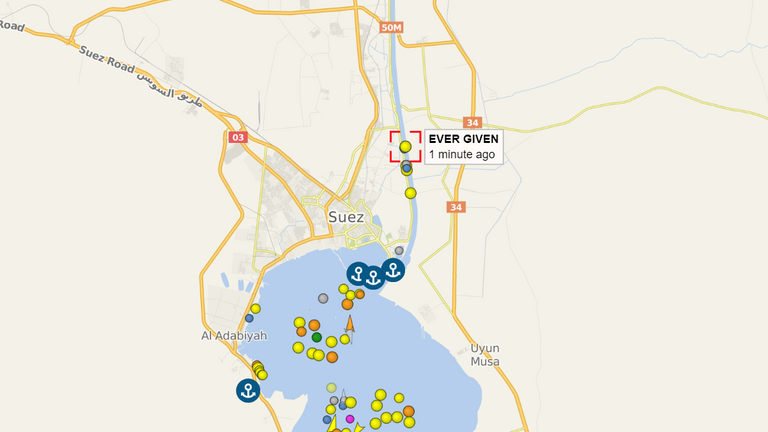 According to shipping company GAC, the 400-metre long ship suffered a blackout when it was travelling northwards in a convoy.

Around 15 ships are said to be stuck behind Ever Given, while the southbound part of the canal is also blocked.

The three-year-old cargo ship, which is registered in Panama, was on its way to Rotterdam in the Netherlands, from China, when it became stuck.

The busy Egyptian shipping lane connects the Mediterranean to the Red Sea, and is the quickest maritime link between Asia and Europe.

Julianne Cona, who is on the vessel behind – the American-registered Maersk Denver – said the Ever Given was stuck sideways.

On Instagram she wrote: “Ship in front of us ran aground while going through the canal and is now stuck sideways looks like we might be here for a little bit.”

About 12% of the world trade volume passes through it, making it one of the world’s busiest waterways.

Nearly 19,000 ships, or an average of 51.5 ships per day, with a net tonnage of 1.17 billion tonnes passed through the
canal during 2020, to according to the Suez Canal Authority.