Drawing on a lesson from early in the Obama administration, the White House wants to tell voters how the legislation will help them and keep Republicans from defining it on their terms. 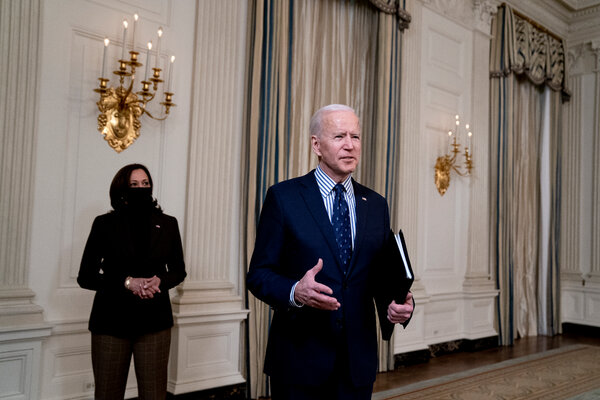 WASHINGTON — President Biden is planning an aggressive campaign to tell voters about the benefits for them in the $1.9 trillion economic relief package that won final congressional approval on Wednesday, an attempt to ensure that he and his fellow Democrats get full political credit for the first big victory of his administration.

The effort will start with Mr. Biden’s scheduled prime-time address to the nation on Thursday and include travel by the president and Vice President Kamala Harris across multiple states, events with a wide range of cabinet members emphasizing themes of the legislation and endorsements from Republican mayors, administration officials said on Wednesday.

The White House’s decision to get out and sell the package after its passage reflects a lesson from the early months of the Obama administration. In 2009, fighting to help the economy recover from a crippling financial crisis, President Barack Obama never succeeded in building durable popular support for a similar stimulus bill and allowed Republicans to define it on their terms, fueling a partisan backlash and the rise of the Tea Party movement.

Mr. Biden starts with the advantage that the legislation, which he is set to sign on Friday, is widely popular in national polling. And it will deliver a series of tangible benefits to low- and middle-income Americans, including direct payments of $1,400 per individual, just as the economy’s halting recovery from the pandemic recession is poised to accelerate.

Speaking briefly to reporters on Wednesday, the president called the legislation “a historic, historic victory for the American people.”

After his address from the Oval Office on Thursday night, Mr. Biden will headline a public relations effort over several weeks that aides say will involve his entire cabinet and White House communications officials, and support from like-minded business and policy organizations and political supporters at all levels around the country. The White House announced on Wednesday that Mr. Biden would visit the Philadelphia suburbs next week.