Ms. Tanden, President Biden’s choice to run the Office of Management and Budget, has a yearslong trail of problematic tweets, many aimed at certain key senators who control the increasingly precarious fate of her nomination.

A procession of these senators — Joe Manchin III, Democrat of West Virginia, and the Republicans Susan Collins of Maine and Mitt Romney of Utah — have indicated that they are unlikely to support Ms. Tanden, in part because of the “divisive” and “overly partisan” nature of her tweets.

This has set the stage for the still-undecided Senator Lisa Murkowski, Republican of Alaska, who was asked on Capitol Hill on Wednesday for a real-time update on her own thinking.

As a visual aid, a Washington Post reporter, Seung Min Kim, showed Ms. Murkowski one tweet from 2017 in which Ms. Tanden had been critical of Ms. Murkowski after the senator praised Republican efforts to cut corporate taxes. “No offense, but this sounds like you’re high on your own supply,” Ms. Tanden wrote. “You know, we know, and everyone knows this is all just garbage. Just stop.”

“Should I ask her? My own supply of what?” Ms. Murkowski wondered along with everyone else. Did Ms. Tanden mean drugs, alcohol, hallucinogens?

Ms. Murkowski, who added that she remained undecided on how she would vote, was expected to speak with Ms. Tanden on Thursday.

But it was safe to assume that Ms. Tanden’s tweet about Ms. Murkowski was not helpful. And Ms. Tanden’s reservoir of possible Republican votes was at this point getting to be in even shorter supply. Which leaves the possibility that she may become the first cabinet-level casualty of the Twitter age. This was not the kind of history Ms. Tanden was hoping to make.

There has been much talk of double standards, opportunism, hypocrisy and all of the things that make politicians rather easy to call out.

“Maybe it’s me, but some of this Republican outrage feels a little manufactured,” said Erik Smith, a longtime Democratic media strategist.

The political question of “problematic tweets” has been dominated in recent years by a certain former president who tweeted a lot — at least until last month when he was sent packing from the White House and by Twitter.

During President Donald J. Trump’s time in office, Republicans on Capitol Hill mastered the Kabuki of ducking questions about his latest inflammatory tweet, usually by claiming they “didn’t see the tweet” or were “not going to comment on every one of the president’s tweets” or were “late for lunch, sorry, got to run.” 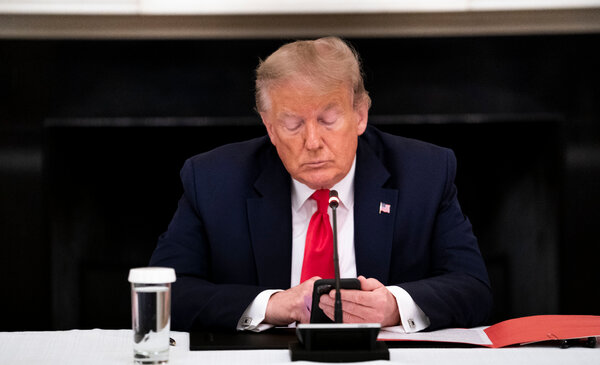 Several Democrats have pointed out that many of these same senators who never bothered to condemn Mr. Trump for even his most unhinged, slanderous or blatantly false missives were now prepared to rule out Ms. Tanden for a body of tweets that were in comparison relatively mild. Her posts could certainly be pointed, edgy and personal, but generally nothing like what was emanating from @realDonaldTrump (R.I.P.).

Say what you will about Ms. Tanden, as many have lately. None of her tweets called a woman “horse face,” blamed wind turbines for killing bald eagles or claimed credit for bringing back the imperiled phrase “Merry Christmas.” None of her 80,000 tweets included the word covfefe, either, for what that is worth.

Around Washington, Ms. Tanden has been a well-known and outspoken liberal for decades. She was a top policy aide to Hillary Clinton, worked in the Obama administration, and has generally been a left-leaning fixture in any number of Washington green rooms, book parties and advisory boards. Any of Ms. Tanden’s nearly 380,000 followers would attest that she is unapologetically partisan.

That is, until she became quite apologetic after Mr. Biden nominated her to be his budget director.

“I do think the last several years have been very polarizing, and I apologize for my language that has contributed to that,” Ms. Tanden told members of the Senate Committee on Homeland Security and Governmental Affairs this month. “I know it’s on me to demonstrate to this committee and to Republican members and Democratic members I can work with anyone.” She noted that she had deleted many of her old tweets.

Not a problem, because Republicans were more than happy to refresh her, and everyone else’s, memory of them.

“You wrote that Susan Collins is, quote, ‘the worst,’ that Tom Cotton is a fraud,” said Senator Rob Portman, Republican of Ohio, scolding Ms. Tanden. “How do you plan to mend fences and build relationships with members of Congress you have attacked through your public statements?”

Mr. Portman went on to read a few more examples, including Ms. Tanden’s assertion that “vampires have more heart than Ted Cruz.” (Mr. Cruz, who was soon bound for Cancún, was one of the few people who seemed to be having less fun than Ms. Tanden.)

As technology evolves, so do the Washington rules of the road. In the past, potential job candidates could be derailed by various “indiscretions,” “past statements” or certain things that they might have said “in the heat of the moment.” All of which is basically Twitter in a nutshell.

“People who want big jobs in Washington are always told to ‘avoid a paper trail,’” said Tevi Troy, a presidential historian and a White House official under President George W. Bush. This generally referred only to potentially inflammatory books, articles or speeches. Then Twitter came along and offered a new and treacherous kind of paper trail. Now anyone can destroy themselves in 280 characters or less in just a few seconds.

“It’s almost worse than a paper trail,” Mr. Troy said of Twitter. “It is more like a diary of what you’re thinking at any given moment.”

There was of course no bigger practitioner of this than Mr. Trump, who somehow was elected president once, served four years in office and was nearly elected a second time despite everything he said, did and tweeted.

“Yes, he did,” Mr. Troy concurred. “But I doubt he could have gotten Senate confirmation.”

Tags: Appointments and E US Politics