The latest BBC weather forecast shows a freezing Russian blizzard wreaking havoc across the UK. The country faces three days of bitter snow chaos with up to 30cm of snow set to blanket Scotland and 10cm across the south-east of England. BBC meteorologist Susan Powell warned that “for all of us, it is going to turn colder”.

There are Met Office warnings out in Scotland with between 20cm to 30cm snow expected.

On Sunday there is also an amber Met Office warning out for heavy snow across the south-east with up to 10cm of snow expected.

The UK weather agency has warned that Storm Darcy, as named by the Dutch meteorological office, will unleash freezing air from Russia and eastern Europe.

It has since extended its yellow warnings for snow and ice, covering the entire length of the UK, from midday on Saturday to midday on Wednesday.

Ms Powell explained: “It will turn increasingly bitter over the next few days.”

JUST IN: Met Office warns UK to be hit by heavy snow and strong winds 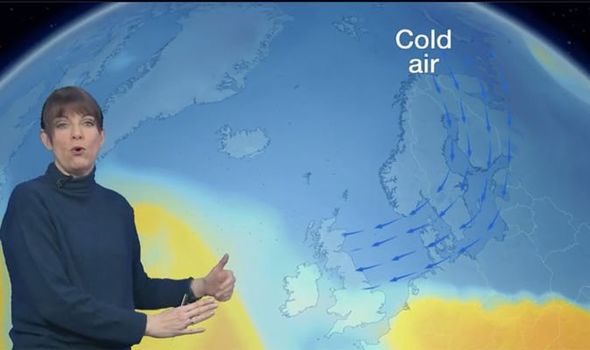 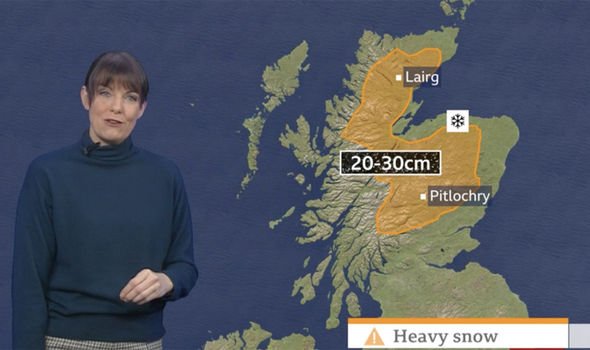 She continued: “We have already seen some snow in Scotland. That threat of heavy and disruptive snow will shift further south through the weekend.

“There is still an amber warning for heavy snow across Scotland until lunchtime today, where more snow will pile up.

“The easterly wind across the UK is dragging in much colder wind from Scandinavia, dragging it south as the day pans out.

“The rain for coastal Scotland and northern England will turn to snow by the afternoon. That easterly wind will make it feel particularly raw.

“Overnight we see some rain pushing itself westwards but the colder air is chasing in as well. 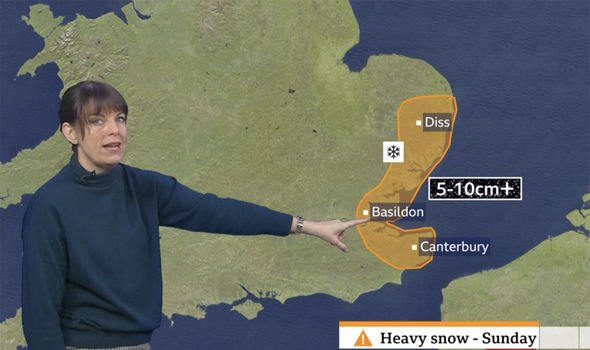 “On Sunday there will be pretty much a frost for all of us. The wind will be strengthening on Sunday and as it is strengthening, it will be dragging in that colder air.

“Storm Darcy will leave a legacy of heavy snow for eastern counties. That snow risk could push as far west as Oxfordshire and Wiltshire.

“Since that easternly wind is above gale-force, we are talking about blizzards, so some rough, rough conditions where this weather front sits.

“On into Monday, we are still in that cold air, still we have that easterly wind, and still significant snow for eastern coastal counties of the UK.

“It will be a tricky wintry week for the week ahead.” 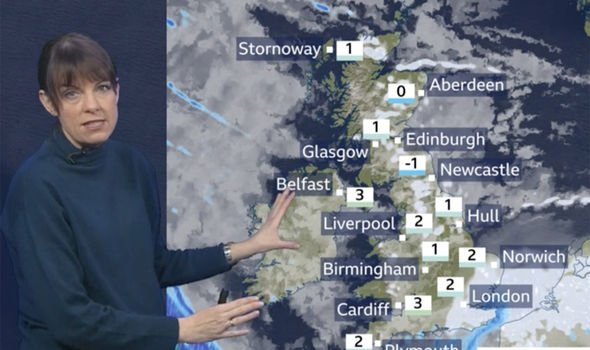 The Met Office has warned that hazardous conditions could last well into next week.

The Met Office’s chief meteorologist, Paul Gundersen, said: “The UK is in for a notably cold and snowy period over the next week, with very cold air in place over the whole of the UK by Sunday.

“Within the amber warning area, more widespread snow is expected and we could see 5-10cm of snow quite widely, with a chance that a few places could see 20cm or more.”