Met Office warnings cover the entirety of England, Northern Ireland, Wales and parts of Scotland this week as Storm Christoph brings fierce winds and torrential rain. Now that rain is forecast to turn to snow in the North of England and Scotland, with Met Office snow warnings in place on Wednesday.

Storm Christoph was named on Monday, with a deepening low threatening the UK enough for the Met Office to name the system as the third storm of the 2020/21 storm season.

Torrential rain is forecast, alongside strong winds and dropping temperatures.

Now the entirety of England is under weather warnings from Wednesday for both rain and snow.

Warnings also span to Northern Ireland, Wales and parts of Scotland as Storm Christoph tracks across the UK. 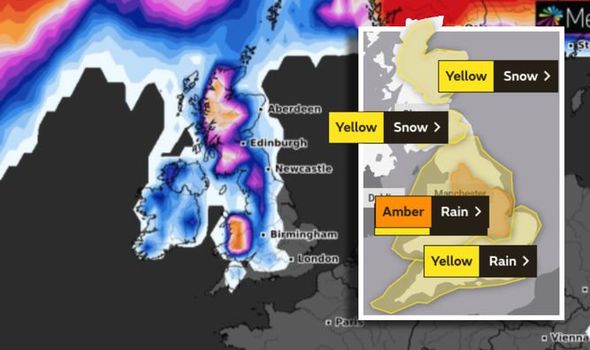 The latest warning to be issued is for snow, with forecasters warning up to 11 inches could blanket hills in the warning area.

The Met Office warns: “Persistent rain over southern Scotland and the far north of England will increasingly fall as snow above around 100 m during Wednesday afternoon and overnight into Thursday.

“Rain is more likely on lowest ground near the east coast and may bring some localised surface water flooding”. 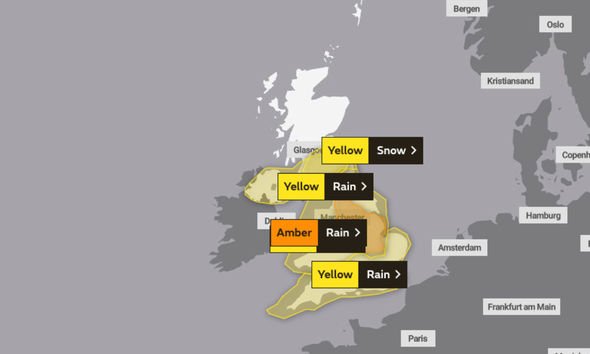 The snow warning comes into force at 12pm on Wednesday and lasts until 12pm on Thursday with the bulk of the snow seen overnight on Wednesday.

The areas affected are the North East of England, SW Scotland, Lothian Borders, and Strathclyde.

Heavy snowfall could cause possible delays on roads, with some vehicles and passengers potentially stranded.

Rural communities could become cut off, and power cuts could impact services like mobile phones.

Maps from WXCharts and Netweather show heavy snow across much of the country on Wednesday, with concentrations around the north of England and Scotland.

This comes as an amber warning for rain has been issued for parts of the north of England including Leeds, Manchester, Sheffield, Wakefield, Lincoln, Nottingham, Leicester and Peterborough.

In place until 12pm on Thursday, the amber warning is due to rainfall accumulations which could reach up to 7.87 inches (200mm) in parts of the southern Pennines and northern Peak District.

The Met Office tweeted to say the storm had already brought torrential rain overnight on Monday, writing: “#StormChristoph has brought the first batch of heavy #rain across the UK through the night Aberllefenni in Wales has recorded 35.2mm since midnight”.

The Environment Agency has issued a swathe of flood warnings for England as Storm Christoph hits, with 132 in place at the time of writing.

He explained: “As we go through the week and the low pressure that is bringing these fronts of rainfall that are persistent and heavy over the next few days … as that low pressure moves east and out into the North Sea, the winds will become a thing really later in the week.

“Also as the low pressure moves away it pulls down a north-westerly airflow which brings much colder air across the UK again which then presents a further risk of snow.”

Mr Claydon described the situation as “a timeline of different hazards as we go through the week but the first hazard is certainly of rain and that’s reflected in the warnings at the moment”.