Back in November last year, millions of Americans took to the polls to vote for the next President of the United States. Democrat Joe Biden won more votes than any other candidate in American history. But outgoing President Donald Trump has continued to claim voter fraud despite many Republicans distancing themselves from him. 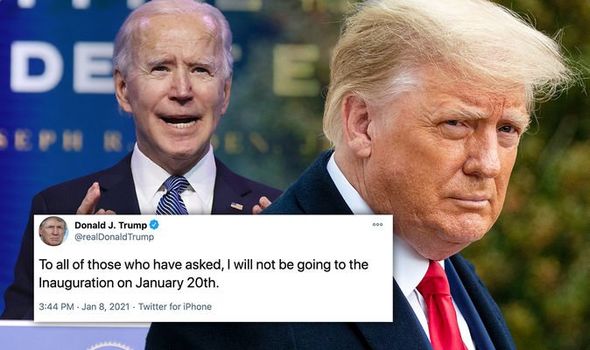 Following his election defeat, sources close to the White House said Mr Trump would refuse to attend the inauguration of the “phoney President”

Mr Trump even claimed he will not attend the inauguration as it would be an “insult to democracy”.

Now, with days to go before Mr Biden is inaugurated, the Republican has confirmed that he will not be attending.

He tweeted: “To all of those who have asked, I will not be going to the Inauguration on January 20th.”

This comes after Democrats and Republicans blamed Mr Trump for the Washington DC protests.

Mr Trump told Save America rally attendees, ahead of Congress certifying the US election results, that supporters should “walk down” to the Capitol building and repeated baseless claims the election was “stolen”.

Trump supporters then broke into the Capitol building forcing Congress to evacuate.

Four people died during the riot, with one woman, Ashli Babbit, shot in the neck by police and three others dying in medical emergencies.

Following the riots, Mr Biden said it was “one of the darkest days in the history of our nation” and blamed Mr Trump for stoking violence.

Many has since called for Mr Trump to be removed from office, including his own former chief of staff, John Kelly.

“The one thing we have going for us here, Jake, is that it’s only 13 more days.”

However, despite leading attorney and politicians laying the blame on Mr Trump, it is believed the Republican is considering pardoning himself in the wake of the riots.

While he has previously floated issuing himself and family members a pardon, a report from the New York Times claims Mr Trump is now considering the legal implications of such a move.

Acts of clemency issued by Mr Trump could include a commutation of any sentence or an outright pardon nullifying legal consequences for a crime.

The New York Times holds the President has asked aides what the legality of issuing himself a pardon would be.