When a pipe burst and flooded her home in 2018, Deonne Burgess knew the cleanup would be messy. What she didn’t expect was the scrutiny from State Farm, her home insurance provider.

A claims adjuster from State Farm sought to strike as many items as possible off a list of repairs from her home in Inglewood, a predominantly Black neighborhood in Los Angeles. The adjuster argued that State Farm should not have to pay to replace a door that was so damaged by the flooding that it no longer closed.

Ms. Burgess, the global payroll director of the Wonderful Company, which makes packaged foods like pomegranate juice and pistachio nuts, began to think that she was being treated with extra suspicion because she is Black. She told State Farm it was unlikely that policyholders in a white neighborhood would receive the same treatment. “It was right after the Malibu fires, and what I said was: ‘No one in Malibu would have to justify things like this’,” she said. 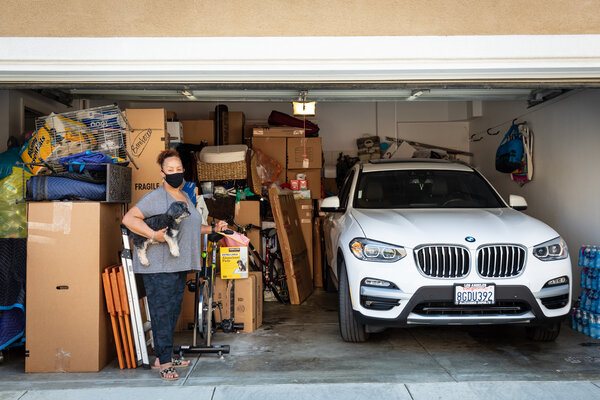 Ms. Burgess’s assertions “are without merit,” said Roszell Gadson, a State Farm spokesman. “State Farm is committed to a diverse and inclusive environment, where all customers are treated with fairness, respect and dignity.”

Ms. Burgess had no way of proving that her experiences with the State Farm adjuster amounted to racism. After all, the same insurer paid out an auto insurance claim for her BMW 5 Series sedan, which was also ruined by the flood; a different set of people handled it and there was not much to argue about. But Mark Young, the vendor hired by State Farm who arranged for her walls and floors to be repaired, and Leonard Redway, the plumber whom Ms. Burgess hired to fix a broken pipe, said that Ms. Burgess was being treated worse than their white customers. Both of them are also Black.

Mr. Redway said claimants in predominantly white, wealthy neighborhoods generally had a much easier time getting insurers to cover the costs of repairs. “If I were to be in 90210, it’s almost like it’s an open check,” he said, referring to the wealthy Beverly Hills ZIP code. “Sometimes the adjusters don’t even come out to look at it.”

Allegations of racism are often tough to prove, but especially so in homeowners’ insurance, where insurers have a lot of discretion and don’t always provide detailed explanations for why claims are denied. Since company representatives often verify claims and assess the credibility of a claimant through home visits, face-to-face interactions and other measures, there’s always the possibility of bias creeping in.

While claims disputes are hardly uncommon in the industry, many Black customers say they feel treated unfairly because of their race — something that Jeff Major, a Manhattan-based public adjuster who haggles with insurance companies on behalf of policyholders over their claims, has witnessed in his line of work. “You can actually see a difference between a Caucasian family and an African-American, Hispanic or Asian family,” Mr. Major said. “It’s sort of known. It’s not spoken about. It’s a culture.”

A tight grip on data

Insurers keep a tight lid on their policy sales and claims data. They have long argued that the size and timing of payouts, and the neighborhoods where claims are registered and addressed, are proprietary information, and sharing that data would hurt their ability to compete. They guard it so zealously that even most regulators don’t have detailed information about how insurers assess individual claims.

Michael Barry, a spokesman for the Insurance Information Institute, a trade group, said that claims data was private because payouts were considered “losses” and revealing them would put insurers “at a competitive disadvantage to each other.”

Where data is publicly available, such as auto insurance, researchers have found that policies discriminate against Black drivers by charging them higher premiums. But homeowners’ insurance has been opaque.

It can be hard to compel insurers to part with data, partly because they are regulated by states and not the federal government. For example, federal laws that outlawed redlining for banks after the civil rights movement don’t apply equally to insurers. And as of 2014, 17 states had no bans on race-based discrimination by insurers, a group of university researchers found.

In late September, the Federal Advisory Committee on Insurance, whose members include top executives from the nation’s biggest insurers, voted down a proposal to study racial bias in the industry over concerns that the study would muddy the distinction between the legitimate discretion insurers have to question claimants’ assertions and unfair bias.

To assess the veracity of their customers’ claims, insurers send adjusters to meet face to face with claimants, giving companies wide discretion in determining the extent of the damage and which claims to label as potentially fraudulent.

“Anytime there’s a lot of discretion there’s room for that discretion to be affected by implicit or explicit bias,” said Tom Baker, a University of Pennsylvania Law School professor who studied insurance payouts to victims of Hurricane Andrew in 1992. Using data obtained from the victims, he found that Latino claimants faced significantly longer delays in receiving money from insurers than white claimants did.

Lisa Thompson, a Black homeowner in Toledo, Ohio, had been staying with her daughter while the roof of her home was being repaired when thieves broke into that house, stripping it bare and taking her water heater, appliances and wrenching off part of her roof. Ms. Thompson filed a claim with her insurer, Allstate.

An adjuster sent by the company accused her of orchestrating the theft. To pursue her claim, Allstate representatives told her, she would have to come to the offices of a law firm hired by the company for a deposition. On Dec. 9, 2019, Ms. Thompson spent nearly four hours answering questions about her employment history, her family and her time living in the house.

Allstate sent her a letter on June 8 saying it was still investigating her claim and asked for another 180 days to complete the process. Shortly afterward, it canceled her policy, saying its investigator had determined that Ms. Thompson did not actually qualify as a “resident” of her home, because she had been staying with her daughter. But Ms. Thompson only found out that her claim had been denied when The New York Times contacted Allstate in November to ask about her case. The insurer had sent the letter notifying her of the denied claim to the address where it had ruled Ms. Thompson did not live.

“We apologize for your client not receiving this correspondence,” an Allstate representative later wrote to a lawyer who is helping Ms. Thompson with her claim. Her house remains uninhabitable. She is filing a discrimination claim against Allstate with the Ohio Civil Rights Commission.

Nicholas Nottoli, an Allstate spokesman, said the claim was denied “based on facts after a thorough investigation.” He added that the company had no record of its adjuster accusing Ms. Thompson of helping the thieves and that “race is not a factor in pricing, underwriting or claim settlements.”

Mr. Young, the vendor hired by State Farm to arrange repairs to Ms. Burgess’s home, has seen insurers lowballing other Black customers and lobbied on their behalf — even though his Los Angeles-based company, Valley Green, which specializes in fixing damaged homes, depends on insurers for business.

He fought on behalf of Langston Phillips, who almost lost his house during a fight with his insurer, Pacific Specialty. Three years ago, Mr. Phillips’s kitchen had flooded after a pipe burst, ruining portions of his three-bedroom home in Inglewood. An adjuster from Pacific Specialty determined that the company owed Mr. Phillips just over $11,000 in repair costs. Mr. Phillips’s contractor said his home needed far more extensive repairs.

Pacific Specialty asked Mr. Young to take a look. Mr. Young determined that the repairs would cost more than $33,000. A battle ensued, with Mr. Young siding with Mr. Phillips even though he had been hired by Pacific Specialty. Because of the dispute, even the sum Pacific Specialty agreed to pay Mr. Phillips reached him in increments, forcing him to move to a single hotel room with his two children while he waited for his kitchen to be rebuilt. On a particularly bad day he emailed a Pacific Specialty representative, pleading for clarity on when some of that money would arrive. “I AM SO LOST,” he wrote.

“We aim to pay claims as quickly and fairly as possible to bring the insured back to their pre-loss living standard,” said Kara Holzwarth, Pacific Specialty’s general counsel. “We find that water leak losses can be fraught with disagreement.” She said Pacific Specialty’s treatment of Mr. Phillips had nothing to do with his race.

After two years of fighting, Mr. Phillips gave up. Worried about losing the house, he moved back in and began to work weekends to pay for the repairs — replacing cabinets, flooring and plumbing — that he was doing himself. “I am bone tired,” he said.

Mr. Young, meanwhile, has noticed that most insurers are not willing to work with him. He is now suing 17 insurance companies, one by one, for discrimination, after the companies refused to add him to their vendor lists. He reached a confidential settlement in his suit against Travelers and has complaints pending against others.

“I’m the only one rattling the cages,” he said, “saying why won’t you give minority-owned vendors any work?”