ATLANTA — The Rev. Raphael G. Warnock and Jon Ossoff, the Democratic challengers in the Senate runoffs in Georgia, have each raised more than $100 million since October — enormous sums that surpassed their Republican opponents by a significant margin and underscored Democrats’ confidence after recent gains the party has made in the state and their hopes that they might capture the Senate.

The contests have drawn a surge of attention and investment from outside of Georgia, given the stakes, and the campaigning has only intensified in the final weeks before the runoff, which is scheduled for Jan. 5.

Senator David Perdue, one of the Republican incumbents, raised $68 million in the period between Oct. 15 and Dec. 16, according to reports to the Federal Election Commission made public on Thursday. Senator Kelly Loeffler, the other Republican, raised close to $64 million during that period.

Mr. Ossoff, who is running against Mr. Perdue, became the best-funded Senate candidate in history after pulling in $106.7 million, according to the filings, and Mr. Warnock, who is challenging Ms. Loeffler, has raised $103.3 million.

The Democrats’ haul was powered in large part by a flurry of smaller donations collected from across the country, filings show, with nearly half of the funds coming from people who donated less than $200.

For Mr. Perdue and Ms. Loeffler, the smaller donations accounted for less than 30 percent of what they raised.

Ms. Loeffler, one of the wealthiest members of the Senate, was the only candidate to give to his or her own campaign, donating $333,200 — far less than the $23 million of her own money she spent on the general election run. 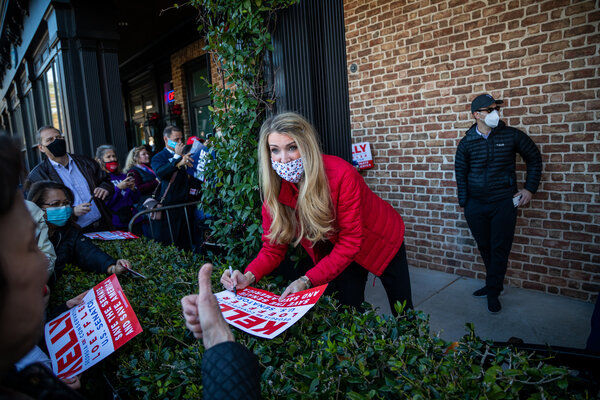 The numbers in the filings only affirm a level of investment that has been plainly visible to Georgia voters for months. Campaign ads fill virtually every commercial break on television and radio. The spending has even spilled over state lines, as the candidates and outside groups have bought time in markets like Jacksonville, Fla., and Chattanooga, Tenn., to reach Georgia voters living nearby.

The amounts brought in by both Democrats exceeded the $57 million raised by Jaime Harrison in his campaign in South Carolina against the Republican senator Lindsey Graham, which had been the highest quarterly fund-raising total for any Senate candidate in U.S. history. Yet the race ended up as a disappointment for Democrats, demonstrating that record-breaking hauls do not necessarily translate to electoral success.

But in Georgia, Democrats have been buoyed by a string of recent success in a state that had until recently been reliably Republican. President-elect Joseph R. Biden Jr. was the first Democratic presidential candidate to win in Georgia since 1992.

Mr. Biden and President Trump have traveled to campaign for their party’s candidates. Vice President-elect Kamala Harris and Ivanka Trump, the president’s eldest daughter, both made campaign stops in Georgia last week.

The Democrats have focused on stock trades their opponents made while serving in the Senate and their support of Mr. Trump in his efforts to overturn his loss in Georgia.

The Republicans have largely homed in on Mr. Warnock, with Ms. Loeffler calling him a “radical liberal” more than a dozen times in a recent televised debate. Her campaign has also circulated select quotations from his more than two decades of sermons, including an instance where he said “nobody can serve God and the military,” a theme that has roots in biblical passages.

A coalition of African-American pastors issued an open letter to Ms. Loeffler last week condemning her campaign for what they saw as an attack on the Black church. Political observers in Georgia have also argued that she has damaged the relationship Republicans had fostered with Ebenezer, the congregation that was once led by the Rev. Dr. Martin Luther King Jr.

Yet in messages on Christmas, a day mostly free of campaigning, Ms. Loeffler and Mr. Warnock sounded a similar note, describing the turbulence of the past year and envisioning a turn for the better.

“With Christmas comes new light and new hope,” Ms. Loeffler said in a video she posted on social media.

“I know too many are brokenhearted tonight,” Mr. Warnock said in his own post on Twitter, “and the holidays don’t seem to make it any better. It’s been night time for a long time, and it may feel like Christmas may never come. But fear not. Dawn is coming. Good news and hope are on the horizon.”