Clare Daly claimed Spanish, French and Portuguese trawlers are destroying the sea bed in the UK’s fishing waters. It comes as the Ministry of Defence laid secondary legislation to provide Royal Navy Police with extra powers to patrol England and Wales’s territorial waters in the event of a no deal Brexit. Speaking to European Parliament, Ms Daly said: “There’s no doubt about it that break-ups can be ugly and hostile and this one is no exception.

“I am heartedly glad that it’s coming to an end because for four years we’ve been fed a diet in Ireland that this is the end of the world as we know it but you know what? It isn’t because business is business and a way will be found.

“I think it’s an awful pity that a lot of this debate was marred by so much sneering and triumphalism from one claiming ‘aren’t those Brits awful idiots, they didn’t know what they were voting for’ to the outrage that the Royal Navy might police British waters.

“Why wouldn’t they when Spanish, French and Portuguese trawlers are already destroying the sea beds and interfering with their fisheries rights. 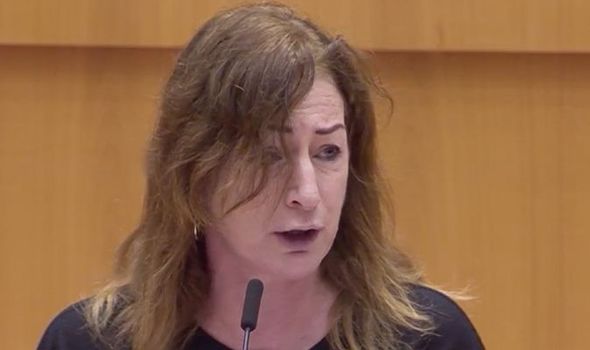 “The idea that the EU is driven by high values and the Brits are just out for themselves is utter nonsense.

“Both sides are looking out for themselves but we should remember here today that 17 million European citizens voted to leave the EU.

“There are tens of millions more who are being let down.

“The real division isn’t between the EU and the UK, it’s between the haves and have nots and we start dealing with that or there will be a lot more Brexits to come.”