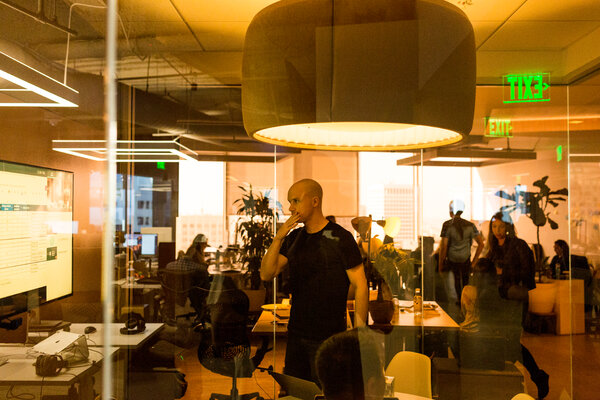 Cryptocurrency is having a banner week in an already big year. In the past day, the value of Bitcoin set a new high and the digital currency exchange Coinbase, the most valuable American crypto company, announced that it had filed for an I.P.O. with the Securities and Exchange Commission.

How is this going to work? Cryptocurrencies like Bitcoin are borderless, decentralized assets championed in particular by libertarians, anarchists and others who reject centralized control and regulation. Coinbase is in the business of popularizing these rebel currencies via an app that makes it easy for anyone to trade crypto like they would stocks or bonds. An I.P.O. would thrust Coinbase — and by extension, cryptocurrency — further into the mainstream, with regulators, bankers and other trappings of official legitimacy. And in an already heady environment for I.P.O.s, the listing presents both practical and philosophical problems.

Coinbase is “spiritually” built for an offering involving digital tokens, its co-founder Fred Ehrsam recently told Fortune. Crypto enthusiasts would love that, but the S.E.C. may not. And for all of the bullishness about Bitcoin at the moment, tapping traditional sources of institutional funds is probably a more lucrative route.

But the traditional underwriting process could be fraught, too. Misreading retail demand in the market debuts of Airbnb and DoorDash made other I.P.O. hopefuls rethink their plans. Adding crypto true believers into this mix only increases the difficulty. That could make a direct listing more appropriate, from a pricing efficiency view, as previous reports have suggested. (Recent changes to listing rules would allow companies to raise money alongside a direct listing, which wasn’t possible before.)

What’s it worth? Last valued at $8 billion in a funding round in 2018, Coinbase is surely worth more now, thanks to the surge in crypto prices and the frenzy for tech stocks. Brian Armstrong, Coinbase’s C.E.O., regularly blogs his thoughts, and is rarely shy about it, but the disclosure rules around public offerings mean that we may not hear much from him about the I.P.O. specifically. He did, however, address the Bitcoin bump recently:

“While it’s great to see market rallies and see news organizations turn attention to this emerging asset class in a new way, we cannot emphasize enough how important it is to understand that investing in crypto is not without risk.”

Whatever stock investors think Coinbase is worth as it prepares to list, crypto investors are convinced that Bitcoin’s long-term prospects are bright. “It’s gold 2.0 for sure,” Daniel Polotsky of CoinFlip, a Bitcoin A.T.M. company, told DealBook. “It’s going to eat gold’s lunch.”

Moderna’s Covid-19 vaccine could get U.S. approval today. The F.D.A. is expected to grant emergency authorization to the treatment, making it the second coronavirus inoculation available in the U.S., after Pfizer’s. But states have received fewer doses of Pfizer’s vaccine than expected, which the company suggested was because the Trump administration hadn’t told it where to send them.

The extent of the big hack of U.S. agencies expands. American officials warned that the attack — thought to be linked to the Kremlin and now believed to have targeted nuclear labs and private tech companies, in addition to the Commerce, Defense and Treasury departments — presents “a grave risk to the federal government.” Experts are taken aback by the hack’s scope and sophistication: Microsoft’s president, Brad Smith, called it “a moment of reckoning.”

Regulators file a third antitrust suit against Google. The legal challenge by more than 30 states, which accuses the tech giant of suppressing search results for rivals, could be combined with the Justice Department’s previous lawsuit. Google also faces a battle against 10 states over its dominance of the ad market.

New York City protects fast-food workers from being fired without cause. The bill, passed yesterday, makes New York the first American city to offer such job security to an industry of that size. Labor law experts say it could provide a template for others.

Robinhood pays $65 million to settle charges by the S.E.C. The trading app settled accusations that it had misled customers about how it made money — largely by collecting payments from Wall Street firms for passing along customer trades — and that it profited at the expense of users. The settlement was announced a day after Massachusetts accused the company of “unscrupulously” pushing investors into risky investments.

Is there a stimulus deal yet?

In one transaction — the takeover of EV Charged, the electric vehicle charging division of he French utility Engie — TPG embraced two of the biggest finance obsessions in 2020: SPACs and climate-focused investing. Top executives from the investment giant spoke with DealBook about how the $1.4 billion deal wasn’t an accident, but years in the making.

TPG has been in the SPAC business since 2015, long before the blank-check funds became widespread. The company wanted to get into more kinds of deals, aside from leveraged buyouts and growth investing, according to Jim Coulter, its co-C.E.O. The “companies that needed a SPAC execution” wouldn’t have fit the criteria for the firm’s buyout portfolio, he said.

Karl Peterson, a senior partner, was named to lead what has become TPG Pace, a division focused on blank-check funds and other specialized deal vehicles.

It has also invested in climate-focused deals for years, as the finance world became more interested in environmental, social and corporate governance, or E.S.G., investing. In 2016, TPG created its first Rise Fund, a big entrant in social impact investing. The firm’s executives became interested in the electric vehicle industry — “we think the market consensus for electric vehicles is understated,” Mr. Peterson said — but with a lot of attention on vehicle makers such as Nikola and Fisker, it sought a different way into the space. The answer was vehicle charging.

The two came together quickly. TPG Pace Beneficial, a SPAC focused on E.S.G. opportunities, raised $350 million in October — and had its eye on Engie’s division. The French utility was initially interested in a more traditional investment, but TPG executives convinced Engie that taking a minority stake in the division wasn’t the best way to boost the business’s growth. A standard leveraged buyout of the division, piling on debt in the process, wouldn’t have been right either.

“We could bring them a solution no one else had showed them,” Mr. Coulter said. The deal came together in a matter of weeks.

TPG has high hopes for the deal (and others like it). Mr. Coulter likened the charging business, since renamed EVBox, to the trendy at-home exercise bike company Peloton, since its value lies in its software and subscription-based model. And he hinted that more climate deals were in the offing: “EVBox is the tip of a very large iceberg at TPG.”

Some of the academic research that caught our eye this week, summarized in one sentence:

Over the past 200 years, deficits have often led to inflation — until recently. (Michael Bordo and Mickey Levy)

How to rethink the U.S.-China relationship

Among President-elect Joe Biden’s most pressing priorities when he takes office next month is resetting Washington’s relations with Beijing, after years of tit-for-tat escalation under President Trump. In the eighth and final debate in our DealBook D.C. Policy Project, we brought together academics, executives and other experts to discuss the state of the U.S.-China relationship, and where it goes from here. It was moderated by Rebecca Blumenstein, The Times’s deputy managing editor.

Though Mr. Biden may change America’s negotiating style with China, “substance, in the short term, is likely to stay the same,” said Dina Powell McCormick of Goldman Sachs. Samm Sacks of New America and Yale said that he may adopt “a more targeted approach” rather than the sweeping moves of his predecessor. And Damien Ma of the Paulson Institute urged caution about advice Mr. Biden may receive to “become more like China to beat China” in areas like industrial policy.

For more on the discussion, including the thoughts of Winston Ma of N.Y.U., James McGregor of APCO Worldwide, Andy Purdy of Huawei Technologies U.S.A., Faiza Saeed of Cravath, Swaine & Moore and Mark Shafir of Citigroup, check out our recap, including video of key exchanges.

And catch up on all the other debates in the series, on reimagining policing, reviving the economy, coping with populism, dealing with climate change, reviving bipartisanship, taming Big Tech and preparing for the next pandemic.

The automation software maker UiPath said it has filed confidentially for an I.P.O., which could value the company at more than $20 billion. (Bloomberg)

The chat service Discord raised $100 million in a new round that doubled its valuation to $7 billion. (WSJ)

The State and Treasury departments reportedly disagree over the scope of a proposed ban on investments in companies linked to the Chinese military. (WSJ)

The Senate is preparing to override President Trump’s threatened veto of a major military spending bill — but time might be tight. (Politico)

Allies of Bob Iger, Disney’s executive chairman, are dropping hints that he would be interested in becoming the U.S. ambassador to China. (WSJ)

Google may be facing antitrust pressure at home, but European regulators approved its $2.1 billion takeover of Fitbit. (NYT)

Is Apple’s next antitrust fight going to be over Apple Pay? (FT)

Movie theater chains are weighing how to retaliate against WarnerMedia’s plan to prioritize streaming, including charging only $3 per ticket for Warner Bros. movies and keeping a bigger cut. (The Hollywood Reporter)

Members of the Sackler family, which founded the maker of OxyContin, denied personal responsibility for the opioid epidemic at a House hearing. (NYT)

How streaming made musicians’ “early stuff” a gold mine. (FT)

Congrats, Goldman Sachs traders: Your bonuses may jump up to 20 percent this year. (Bloomberg)