We’re covering a new analysis of Britain’s slipshod pandemic spending, a move to the right for Emmanuel Macron and an upside to the climate crisis for Russia. 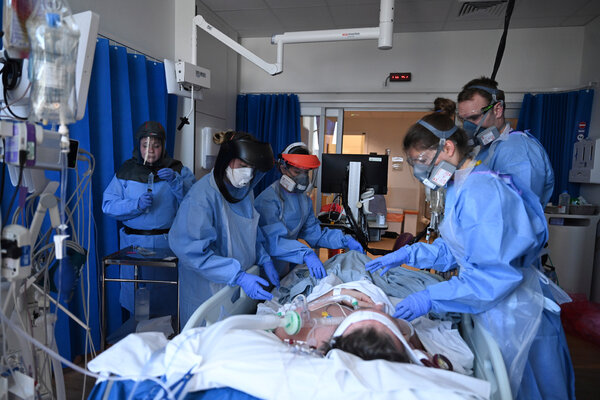 As Britain scrambled for protective gear and other equipment, select companies — many of which had close connections to the governing Conservative Party or no previous experience — reaped billions, according to a New York Times analysis of more than 2,500 contracts.

In some cases, more qualified companies lost out to those with better political connections, which were granted access to a secretive V.I.P. lane that made them about 10 times more likely to be approved for a contract.

Conclusions: While there is no evidence of illegal conduct, there is ample evidence of cronyism, waste and poor due diligence, with officials ignoring or missing red flags, including histories of fraud, human rights abuses, tax evasion and other serious controversies.

Christmas restrictions: Prime Minister Boris Johnson has stuck by a pledge to lift limits on gatherings from Dec. 23 to 27 despite growing calls to abandon the plan as coronavirus cases surge.

The U.S. is negotiating a deal with Pfizer to produce tens of millions of additional doses of its coronavirus vaccine. Vaccinations began in the U.S. on Monday.

The number of severe Covid-19 cases in the Gaza Strip sharply increased, raising concerns that hospitals could soon be overwhelmed.

In the first week of Britain’s vaccination program, more than 137,000 people have received shots.

An international team of 10 scientists working with the World Health Organization will travel next year to China to investigate the origins of the coronavirus.

Macron’s pre-election slide to the right

With an eye on France’s next presidential election in 2022, President Emmanuel Macron has tacked to the right, alienating former liberal supporters and current members of his own party.

After recent terrorist attacks, Mr. Macron pushed forward bills on security and Islamist extremism that raised alarms among some French, the United Nations and human rights groups, but won favor among right-leaning voters. Marine Le Pen, the leader of the far-right National Rally, is expected to be his main challenger.

Analysis: Despite his center-left origins, Mr. Macron has always been known as a shape-shifter. His slide to the right is regarded by some as a clean break from the first three years of his presidency.

Related: A French court found 14 people guilty of aiding the 2015 attack on the magazine Charlie Hebdo, supplying the attackers with cash, weapons and vehicles.

Gender equality: The mayor of Paris was fined nearly $110,000 for hiring too many women, under a 2012 law intended to address gender imbalance at senior levels of the country’s Civil Service.

A landmark ruling on air pollution

A 9-year-old girl who died of an asthma attack in 2013 became the first person in Britain to officially have air pollution listed as a cause of death, after she was exposed to levels of nitrogen dioxide and particulate matter beyond World Health Organization guidelines.

The death of the girl, Ella Adoo-Kissi-Debrah, who was Black, shed a harsh light on how pollution disproportionately affects minorities and deprived families in Britain.

Legal experts said it could open a new door to lawsuits by pollution victims or their families. The girl lived near a major road in southeast London. Her mother said that if she had been told air pollution was contributing to her daughter’s ill health, she would have moved.

Context: The effects of air pollution kill an estimated 7 million people around the world every year, according to the W.H.O., with 4.2 million caused by ambient air pollution.

How Russia could win the climate crisis

No country stands to gain more from climate change than Russia, above, where warming temperatures are transforming vast swaths of formerly barren land. The spring thaw is coming earlier and earlier, while rainstorms are stronger and wetter, and the process is likely to accelerate.

Russia hopes to seize on its newfound longer growing seasons to refashion itself as one of the planet’s largest producers of food.

China moon mission: China’s Chang’e-5 spacecraft brought a capsule of rocks and soil from the moon back to Earth. The mission returned the first new cache of lunar samples since 1976.

Coal: After months of restrictions, China has officially blocked coal imports from Australia, delivering a gut punch as many countries are rethinking their dependence on the fossil fuel.

Terrorism: Federal prosecutors in Manhattan charged a Kenyan man working as an operative for the Shabab with plotting a Sept. 11-style attack on a building in an undisclosed American city.

Portugal: The death of a detained Ukrainian man in Lisbon, after what prosecutors called “inhumane treatment,” has raised questions about the country’s detention policies and has prompted calls for the interior minister to step down.

L.G.B.T.Q. rights: More than 370 spiritual leaders from more than 35 countries signed a declaration demanding a global ban on disputed conversion therapy and calling for an end to violence against L.G.B.T.Q. people.

Snapshot: Above, actors from “Pandemonium,” a new BBC sitcom on life during the pandemic. The show follows a family stuck in a British seaside town after the coronavirus quashes their planned Disneyland vacation. It asks a bold question: Are we ready to laugh about Covid-19 — and is there anything to laugh about?

Cricket ‘catfishing’: Because female tree crickets tend to prefer louder, larger male mates, cricket underdogs fashion mini-megaphones out of leaves to amplify their calls and coax females into mating with them, according to a new study.

What we’re reading: This Outside magazine account of a trip to the Great Barrier Reef, made after the writer’s husband suffered a stroke at 40. It’s a cleareyed look at bliss, travel and what “last-chance tourism” really means.

Cook: Our most popular recipe from 2020: this jammy caramelized shallot pasta, which is well worth slicing half a dozen alliums for. Don’t skip the anchovies.

Make: Here’s how to prepare your own incense with sandalwood powder, herbs and essential oils.

Get inspired. At Home has our full collection of ideas on what to read, cook, watch and do while staying safe at home.

How to be a newsletter pro

If you’re reading this, you probably like newsletters. Well, there’s still time to make your own to recap 2020. As December winds down, it’s an opportunity to take stock and to let your friends and family know how you’ve been doing in this deeply strange year. Our reporter offers tips for creating a written playback.

If tales from vacations or group outings are in short supply this year, think of the more local adventures you experienced — like adopting a cat, exploring the city on foot, learning how to cook or taking up the mandolin. If the whole family has something to report, ask each member of the household to contribute a paragraph or two.

Even if travel snaps are in short supply and the 2020 school pictures are Zoom screenshots, browse your photo library for other images to visually document your year. For a year-end family portrait that includes everyone, set the camera timer so the photographer has a few seconds to jump into the frame.

Snapshots from your walks around town, outdoor dining with friends, close-ups of the garden flowers and pet photos can capture life as you lived it in 2020, even in a lockdown or quarantine.

Now it’s time to combine your words and pictures into an eye-catching document. If you’ve never created a layout before, most word processing programs include a template gallery you can use as a starting point; Apple’s Pages and Google Docs include templates.

In the gallery, choose a template you like and then replace the formatted sample text by highlighting it and writing (or pasting in) your own words. Tap or click in sample images to replace them with photos from your own photo library, or look for a menu option to insert new images.

That’s it for this briefing. Have a great Thursday.

Thank you
To Theodore Kim and Jahaan Singh for the break from the news. You can reach Natasha and the team at briefing@nytimes.com.

P.S.
• We’re listening to “The Daily.” Our latest episode is on a sophisticated Russian hacking operation that targeted American agencies.
• Here’s our Mini Crossword, and a clue: Wishy-washy R.S.V.P. (five letters). You can find all our puzzles here.
• The Twitter account @2ShotsInTheArm is sharing photos of doctors and nurses getting the Covid vaccine.
• Claire Gutierrez, a story editor who has been at The Times Magazine, will become our Great Reads editor.