Low pressure is expected to push towards northern parts of the UK from the Arctic next week and blast up to 14 inches in Scotland on the first day of 2021. Christmas Day is forecast to see up to 10 inches of snow potentially fall in Scotland by 6pm, according to WXCHARTS. The maps also show snow depth levels of 14 inches on January 1 at 6pm in north west Scotland. The snow fall is expected to begin on Monday, December 21, and last until at least Friday, Janury 1, over a 12 day period, the maps suggest.

Further down the UK in Cumbria, there could also be three inches of snowfall in the New Year.

Temperatures are also expected to plummet to freezing lows of -10C in January 1 in central Scotland, with the rest of Scotland averaging around -7C.

Christmas Day could also be cold for Scotland as temperatures drop to -4C, but both the north and south of England will average 0C.

England is also likely to be struck by sub-zero lows as -5C is forecast for parts of the north west including Carlisle on January 1. 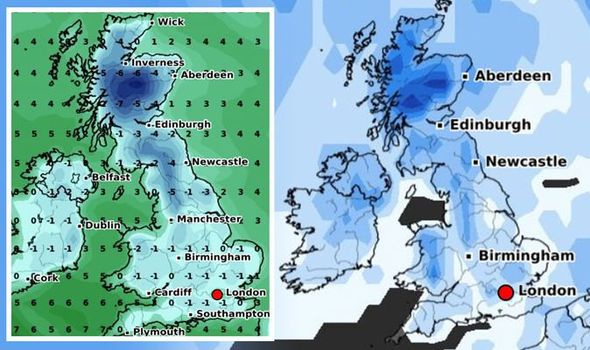 The rest of England is likely to see 0C lows with Newcastle dipping to -1C on the same day.

Justina Gilbert, of The Weather Company, warned of snow on Christmas morning on higher ground.

She told Express.co.uk: “As for Christmas Day, we are still looking at temperatures across the UK trending colder from Wednesday 23 as a cold front clears to the continent and a colder air mass is brought in behind.

“We are looking at drier conditions for most through Thursday 24 with rain feeding into western areas at times and snow to higher levels of the Cambrian Mountains and Scottish Highlands. 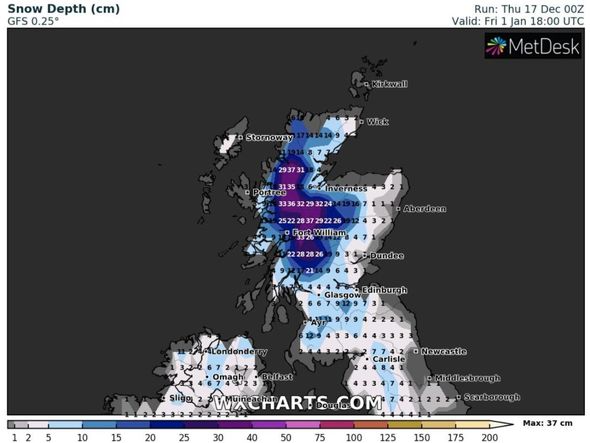 “Through the day on Friday 25, the rain in the west will continue to feed in with morning snow to mid and high levels of the Highlands, Cambrian Mountains and Pennines.

“At lower levels, this will more be sleet or a rain/snow mix. SE Ireland and most of the remainder of England will remain drier and sunny.

“Through the afternoon we are looking at more widespread rain across Ireland with northern Britain and Wales seeing snow to mid and possibly lower altitudes in the west and north.

“The remainder of England continues to be drier with clear skies into the evening. 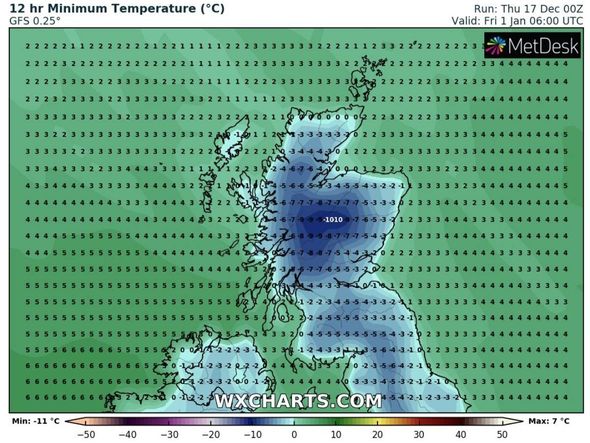 “Temperatures on Christmas day will feel quite cold and crisp in the northerly wind flow and clearer skies with maximum temperatures 4 to 6 C for most and lower levels, and feeling more like -2 to -5 C in the wind chill.”

Jo Farrow from Netweather added a northerly flow from the Arctic may blast cold conditions over the festive period.

She said: “There are signs of it turning colder later next week, with a shift to a more northerly flow. 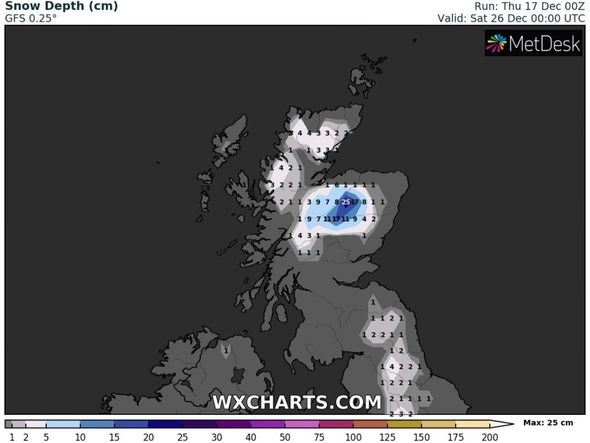 “This northerly shift doesn’t guarantee you Christmas snow, but it won’t be as mild as it has been this week.”

BBC weather added the UK could get a White Christmas this year.

The forecast for next week said: “By Christmas Eve and Christmas Day, confidence is growing for at least a couple of days of colder and brighter weather, as winds change to a north-westerly direction and a ridge of high pressure then moves in from the west.

“Scattered wintry showers in this north-westerly flow may fall as snow, raising the possibility of a White Christmas in parts of the UK! 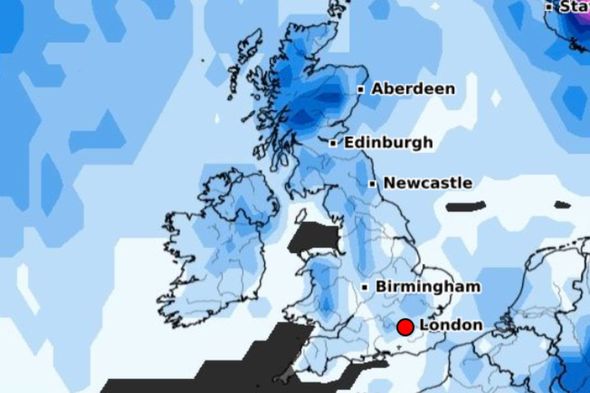 “Scotland and the hillier parts of northern England and Wales stand the best chance. Stay tuned to the forecast over the next few days. Some sunshine by day, but a frost is very likely at night for many places.

“Additional fronts moving in at the end of the week will bring some rain. A slight chance of this falling as snow for a time as the fronts move into colder air over the UK.”

The Met Office added northern and eastern regions are expected to bear the brunt of the snow.

The long-range forecast for December said: “North and east seeing the greatest chance of showers, with these falling as snow in places, especially on higher ground.

“A potential for strong winds in the far south at first; later, any strong winds are likely to be confined to the north and perhaps the east.

“Prevalence of overnight fog and frost is likely increasing, with fog potentially slow to clear.”