In the end, democracy carried the day.

Wisconsin’s 10 electors calmly walked into a quiet State Capitol on Monday, seeing more police officers than protesters. As they waited to officially cast their ballots, the socially distanced Democratic officials and activists took selfies in an ornate wood-paneled room. When the vote finally came, one elector added hearts to the checks on the lines for the Democratic president ticket, in a rare display of emotion.

“We made it,” said Gov. Tony Evers, relief flooding his voice, after announcing the final tally — a unanimous vote for Joseph R. Biden Jr. and Kamala Harris.

When the Electoral College cast its ballots for Mr. Biden on Monday, the moment felt both extraordinary and repetitive. After all, the president-elect and his team have been winning the election since November, emerging victorious again and again in court cases, legislative hearings and recounts.

Yet the extraordinary assault by President Trump and his allies on the election and their efforts to disenfranchise millions of voters exposed the creaky, administrative mechanics of American democracy. 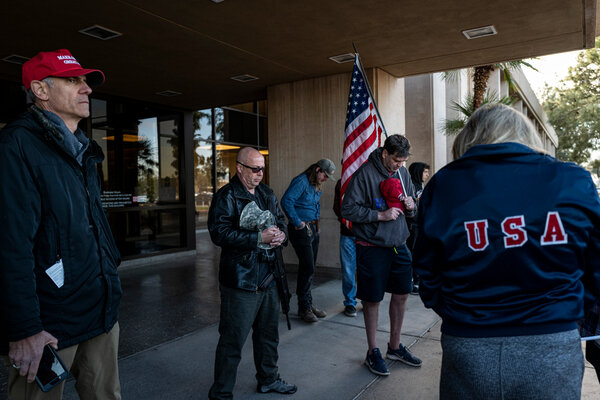 And on Monday, the bureaucracy bit back.

From Hillary Clinton flashing a thumbs up after casting her vote as a New York state elector to the shadow gatherings held by Republicans in battleground states, it was a day marked more by symbolism, and emotion for some, than by surprise.

Robin Smith, a Democratic activist and librarian in Lansing, got choked up as she cast her ballot for the president-elect, wearing a Biden/Harris face mask and a red, white and blue jeweled donkey pin for the Democratic Party.

“‘Stay present, Mom. Stay in the moment,’” Ms. Smith said her daughter urged over text. “As a Black female, it really means everything to me.”

Before the official votes in Maryland, Gov. Larry Hogan, a Republican who was an early critic of Mr. Trump’s efforts to sow doubt in the election results, called the event a “civics lesson” — perhaps a nameless dig at the president.

“The peaceful transition of power that we formally take part in here today is a hallmark of our democracy that has been handed down for more than 220 years,” Mr. Hogan said. “It is a reminder that despite our differences, we are united as Americans who honor the will of the people.”

As Mr. Hogan noted, the history of American democracy was on display — as were its many quirks.

In Kentucky, electors pledged that they had not been involved in a duel with a deadly weapon, a part of the state’s oath added in the early 1800s because too many residents were killing one another.

In Alabama, electors listened to a lecture on the history of their role from an actor dressed as Uncle Sam before casting their nine votes for Mr. Trump.

And in New Hampshire, Mary Carey Foley, a retired high school teacher who first met Mr. Biden nearly four decades ago, described her political lineage as a third-generation elector, detailing the votes of her mother in 1972 and grandmother in 1946.

Most unusual, perhaps, was that anyone was talking about electors at all. As the country marked 300,000 deaths from the coronavirus, and anxiously watched the rollout of a vaccine, Americans found themselves bombarded by obscure officials casting ballots and signing them multiple times — proceedings that were shown on cable news throughout the day.

Over glitchy internet streams, the electors aimed for transparency, both an effort to defang the conspiracy theories that have gained traction among Trump backers and a tacit admission that some conservatives are unlikely to ever accept the outcome of the election. Those theories flourished on the live chat streams that accompanied the meetings, a uniquely 2020 mix of champagne emojis and conspiracy theories.

In Nevada, six electors meeting over a publicly livestreamed video chat held signed ballots to their screens to be counted by Mark Wlaschin, the state’s deputy secretary of state for elections. As they did, the chatter offered a glimpse into a nation divided.

“We all know Trump is having a meltdown right now!” wrote a user who went by Clorox Bleach, followed by four laughing emoji faces.

Based Hillbilly shot back: “I’m a Trump supporter and I’m not mad cuz Biden will never be president.”

Last week, the Supreme Court rejected a desperate effort by Trump allies to change the outcome of the election, shredding a long-shot strategy that depended on barring four states won by Mr. Biden from casting their electoral votes and persuading Republican-controlled state legislatures to select alternative slates of friendly electors.

Mr. Trump now finds himself with few remedies to change the outcome of the election, though that hardly stopped some supporters from continuing to push fantastical plans.

Much of the last-ditch efforts centered on what some Trump allies called “an alternate slate of electors” — die-hard supporters who gathered in state capitols to vote for Mr. Trump. The self-proclaimed electors are not certified by state executives and have no legal standing, according to legal experts.

That didn’t stop them from a little live-action role playing of the typically mundane inner workings of democracy.

Outside the Michigan State Capitol on Monday, 10 of the so-called Republican electors vowed to cast their ballots for Mr. Trump before being denied entry by the state police.

Bernadette Comfort, the Pennsylvania chair of the Trump campaign, called the shadow event in her state a “procedural vote” taken at the request of the campaign.

“This was in no way an effort to usurp or contest the will of the Pennsylvania voters,” she said.

Josh Shapiro, the state’s Democratic attorney general and one of its 20 electors, cast the effort in far less sympathetic terms: “A ridiculous charade,” he told CNN shortly after voting for Mr. Biden.

Across the country, some of Mr. Trump’s allies seemed far more ready to accept electoral reality. After California officially affirmed Mr. Biden’s victory, several Republican senators finally acknowledged the Democrat as the president-elect on Monday evening, a reversal from weeks of public denial among G.O.P. lawmakers on Capitol Hill.

The top Republican leaders in the Michigan Legislature acknowledged Mr. Trump’s loss on Monday, reiterating their refusal to cave to the president’s calls to interfere with the electoral process.

“I fought hard for President Trump — nobody wanted him to win more than me,” said Speaker Lee Chatfield. “But I love our republic, too. I can’t fathom risking our norms, traditions and institutions to pass a resolution retroactively changing the electors for Trump.”

He added: “I fear we’d lose our country forever.”

After weeks of harassment and death threats aimed at election officials, only a handful of Trump supporters gathered outside state capitol buildings on Monday — a sign of diminishing hope even among the president’s more ardent backers that he could prevail.

In Madison, a small group made a slow march around the Capitol on a frigid afternoon, carrying rosaries, statutes of the Blessed Virgin and plenty of grievances about the election.

Democrats, too, saw some opportunity to fuel their political battles. Nikema Williams, the Democratic state party chairwoman of Georgia, opened the proceedings by taking a bit of a victory lap. As she spoke, long voting lines grew across the state, with the start of in-person balloting in two crucial runoff races that will determine control of the Senate.

“Georgian voters are very powerful, and we’re going to prove it again soon,” Ms. Williams said. “Georgians have known it for years, and now the nation knows that Georgia is a blue state.”

Since Nov. 7, when Mr. Biden won the presidency and the Trump campaign accelerated its attacks on the process, Americans had looked to the Electoral College vote as a finish line.

Now, as the country crossed it, not everyone was so confident.

“As this event comes to a close, it is evident that this is not the end of the discussion about the 2020 election nor how we conduct elections going forward,” said Katie Hobbs, Arizona’s Democratic secretary of state. “This is likely the beginning of a lengthy debate.”