The BBC Weather forecaster said temperatures will grow colder compared to previous days as overnight showers develop further through the day. Carol Kirkwood said the conditions are expected to remain rainy most of Monday, with the rainfall persisting in some areas as we move into Tuesday. The BBC meteorologist said: “This morning is less mild outside.

“Temperatures are currently between 8C and 12C but today nobody is immune to a shower.

“The forecast is one of a little bit of sunshine but also blustery showers. We’ve had some heavy ones overnight, we’ve had some heavier rain as well pushing through the course of the night and some of that has been thundery.

“Through today, very similar conditions in that. We’re looking at showers or longer spells of rain.

“Most of those will be in the north and west but we will some of those get into central areas, this afternoon a weather front coming out across the southeast will bring in some showers.” 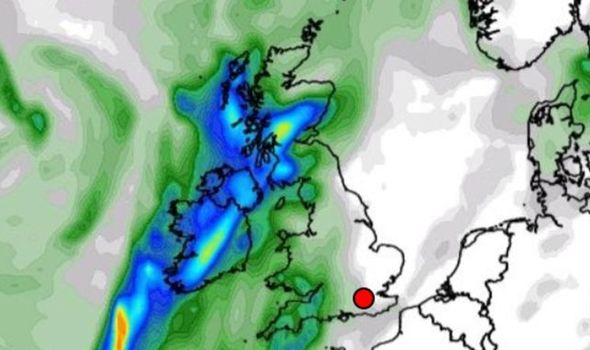 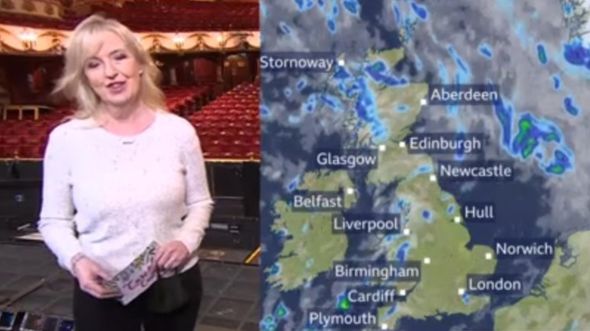 Ms Kirkwood noted the rainy conditions will peter out across the southeast as the wet weather front moves into the North Sea as we head overnight.

But areas across the north and the west of the UK are unlikely to shake off the showers as she warned some could “merge” through Tuesday and become heavier.

The BBC Weather forecaster continued: “As we head through the evening and overnight, that front in the southeast eventually clears off with its showers into the North Sea but another coming into the northwest will introduce some rain. 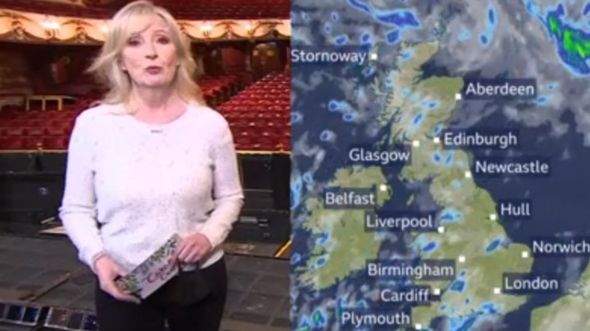 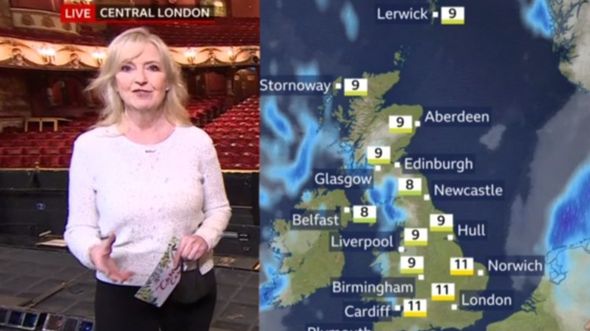 “Many of the showers will be soft and the wind will ease down.

“As we head through tomorrow it’s a similar story in that in the north and the west particularly, we’re likely to see showers, some of them merging to get some longer spells of rain.

“But drier conditions across central and eastern areas. Once again, temperatures pretty good for this stage in December. 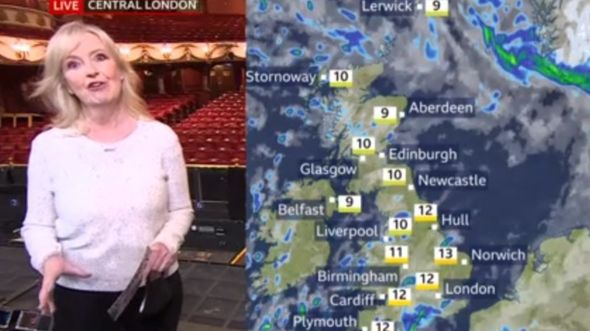 The Met Office’s long-range forecast set a gloomy tone for the days leading up to Christmas, predicting the heavy showers will slowly turn into a “mixture of blustery showers and brighter spells.”

The forecast said: “These unsettled conditions set to continue with showers likely heaviest in the west, whilst areas further east experiencing drier spells.

“Mild and windy across the UK, with coastal gales. Towards the end of the period, there is a greater chance of more settled conditions, mainly in the north and east, accompanied by increasing incidence of frost and fog.

“Rain or showers becoming less frequent and tending to become focussed across southern and western parts.

“Wintriness most likely confined to higher ground, but there remains a chance of snow temporarily to low levels.”