President Trump lost key swing states by clear margins. His barrage of lawsuits claiming widespread voting fraud has been almost universally dismissed, most recently by the Supreme Court. And on Monday, the Electoral College will formally cast a majority of its votes for President-elect Joseph R. Biden Jr.

But as the president continues to refuse to concede, a small group of his most loyal backers in Congress are plotting a final-stage challenge on the floor of the House of Representatives in early January to try to reverse Mr. Biden’s victory.

Constitutional scholars and even members of the president’s own party say the effort is all but certain to fail. But the looming battle on Jan. 6 is likely to culminate in a messy and deeply divisive spectacle that could thrust Vice President Mike Pence into the excruciating position of having to declare once and for all that Mr. Trump has indeed lost the election.

The fight promises to shape how Mr. Trump’s base views the election for years to come, and to pose yet another awkward test of allegiance for Republicans who have privately hoped that the Electoral College vote this week will be the final word on the election result.

For the vice president, whom the Constitution assigns the task of tallying the results and declaring a winner, the episode could be particularly torturous, forcing him to balance his loyalty to Mr. Trump with his constitutional duties and considerations about his own political future.

The effort is being led by Representative Mo Brooks, Republican of Alabama, a backbench conservative. Along with a group of allies in the House, he is eyeing challenges to the election results in five different states — Arizona, Pennsylvania, Nevada, Georgia and Wisconsin — where they claim varying degrees of fraud or illegal voting took place, despite certification by the voting authorities and no evidence of widespread impropriety. 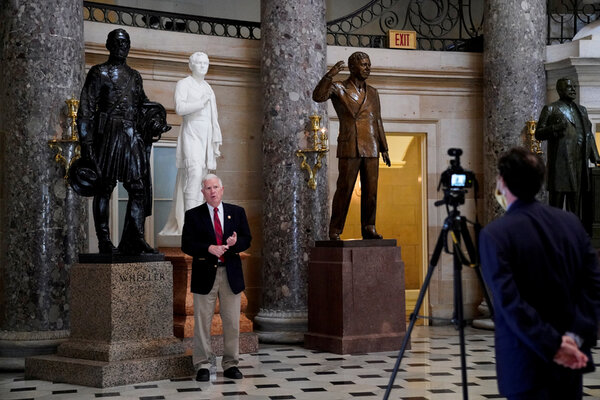 Under rules laid out in the Constitution and the Electoral Count Act of 1887, their challenges must be submitted in writing with a senator’s signature also affixed. No Republican senator has yet stepped forward to say he or she will back such an effort, though a handful of reliable allies of Mr. Trump, including Senators Ron Johnson of Wisconsin and Rand Paul of Kentucky, have signaled they would be open to doing so.

The president has praised Mr. Brooks on Twitter, but has thus far taken no evident interest in the strategy. Aides say he has been more focused on battling to overturn the results in court.

Even if a senator did agree, constitutional scholars say the process is intended to be an arduous one. Once an objection is heard from a member of each house of Congress, senators and representatives will retreat to their chambers on opposite sides of the Capitol for a two-hour debate and then a vote on whether to disqualify a state’s votes. Both the Democratic-controlled House and Republican-controlled Senate would have to agree to toss out a state’s electoral votes — something that has not happened since the 19th century.

Several Senate Republicans — including Patrick J. Toomey of Pennsylvania, Susan Collins of Maine, Lisa Murkowski of Alaska and Mitt Romney of Utah — have forcefully rejected the idea of overturning the results, and their votes would be enough for Mr. Biden to prevail with the support of Democrats.

“The Jan. 6 meting is going to confirm that regardless of how many objections get filed and who signs on, they are not going to effect the outcome of the process,” said Edward B. Foley, a constitutional law professor at Ohio State University who has written extensively on the electoral process. “We can say that with clear confidence.”

But he noted that the session could still carry consequences for the next few years. If even one Republican senator backed the effort, it could ensure that the partisan cloud hanging over the election would darken Mr. Biden’s presidency for years to come. If none did, it could send a definitive message to the country that despite Mr. Trump’s bluster, the party trusted the results of the electoral process and was finally ready to recognize Mr. Biden as the rightful winner.

Mr. Brooks is far from the first lawmaker to try to use the tallying process to challenge the results of a bitter election loss. House Democrats made attempts in 2001, 2005 and even 2017, but they were essentially acts of protest after their party’s nominee had already accepted defeat.

What is different now is Mr. Trump’s historic defiance of democratic norms and his party’s willing acquiescence. If Mr. Trump were to bless the effort to challenge the congressional tally, he could force Republicans into a difficult decision about whether to support an assault on the election results that is essentially doomed or risk his ire. Many Republicans are already fearful of being punished by voters for failing to keep up his fight.

The dilemma is particularly acute for Mr. Pence, who is eyeing his own presidential run in 2024. As president of the Senate, he has the constitutionally-designated task of opening and tallying envelopes sent from all 50 states and announcing their electoral results.

But given Mr. Trump’s penchant for testing every law and norm in Washington, he could insist that Mr. Pence refuse to play that role. And either way, it will call for a final performance of the delicate dance Mr. Pence has performed for past four years, trying to maintain Mr. Trump’s confidence while adhering to the law.

“The role the V.P. plays in the transition is something that people have never focused on and never think about, but with Donald Trump, you now have to consider all the possibilities,” said Gregory B. Craig, a White House counsel under President Barack Obama.

In 1961, Richard M. Nixon, who had just lost the election, oversaw the vote tabulation and had to decide whether to recognize competing electors from the new state of Hawaii. Mr. Nixon ultimately made a decision that hurt his vote total but had no effect on the final result that John F. Kennedy had won. Forty years later, after the 2000 election, Al Gore had to reject objections from his fellow Democrats and certify the victory of George W. Bush, who had won the state of Florida after the Supreme Court ordered a recount ended in that state.

Since the election, Mr. Pence has sent mixed messages about how far he would be willing to go to help Mr. Trump. In the early days of the transition, Mr. Pence fended off requests from the president’s loyalists to back specious claims about election fraud. But more recently, he publicly praised the failed lawsuit brought by the attorney general of Texas to have votes from battleground states thrown out.

Democrats said they were confident that Mr. Biden would emerge unscathed, but his transition team has begun coordinating with Speaker Nancy Pelosi and Senator Chuck Schumer of New York, the minority leader, to prepare for the possibility that one or more senator would sign onto the challenges.

Mr. Brooks has been trying to drum up support. He met last week with about a half-dozen senators, including Mike Lee of Utah, and separately with the conservative House Freedom Caucus.

“My No. 1 goal is to fix a badly flawed American election system that too easily permits voter fraud and election theft,” Mr. Brooks said. “A possible bonus from achieving that goal is that Donald Trump would win the Electoral College officially, as I believe he in fact did if you only count lawful votes by eligible American citizens and exclude all illegal votes.”

It remains unclear how broad a coalition he could build. More than 60 percent of House Republicans, including the top two party leaders, joined a legal brief supporting the unsuccessful Texas lawsuit asking the Supreme Court to overturn the election results. But it is one thing to sign a legal brief and another to officially contest the outcome on the House floor.

Some Republicans including Representative Scott Perry of Pennsylvania and Matt Gaetz have also signaled they could support an objection. Mr. Brooks said he had been speaking with others who were interested. But prominent allies of the president who have thrown themselves headfirst into earlier fights, like Representative Jim Jordan of Ohio or even the House minority leader, Representative Kevin McCarthy of California, have so far been publicly noncommittal.

“All eyes are on Jan. 6,” Mr. Gaetz said on Fox News Friday night after the Supreme Court rejected Texas’ suit. “I suspect there will be a little bit of debate and discourse in the Congress as we go through the process of certifying the electors. We still think there is evidence that needs to be considered.”

Mr. Paul, Republican of Kentucky, said he would “wait and see how all the legal cases turn out” before deciding what to do.

Mr. Johnson plans to hold a hearing this week “examining the irregularities in the 2020 election,” featuring Ken Starr, the former independent counsel who is a favorite of the right, and at least two lawyers who have argued election challenges for Mr. Trump. Whether he proceeds to challenge results on Jan. 6, he told reporters last week, “depends on what we find out.”