GUACA, Venezuela — The most extraordinary moment in the young fisherman’s life began in the most mundane way: with a morning visit to the latrine.

Walking back to his tin-roofed hut on Venezuela’s Caribbean coast, the fisherman, Yolman Lares, saw something glisten along the shore. Raking his hand through the sand, he pulled up a gold medallion with an image of the Virgin Mary.

The village of Guaca was once at the center of Venezuela’s fish processing industry but is now reduced to penury by the lack of gasoline and the closure of most of its small fish-packing plants. Amid such misery, the valuable find seemed like a miracle.

“I began to shake, I cried from joy,” said Mr. Lares, 25. “It was the first time something special has happened to me.” 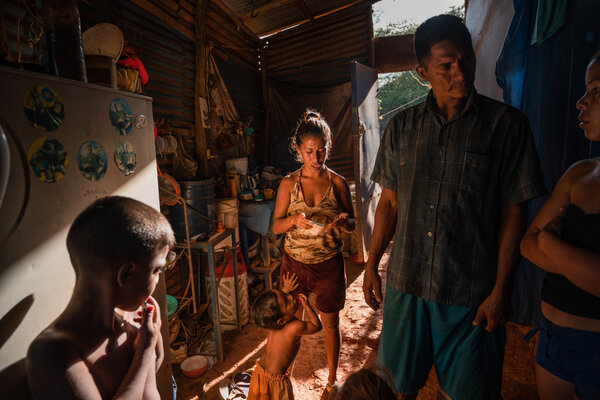 At home, Mr. Lares told his father-in-law, also a fisherman. Word of the discovery spread swiftly, and soon most of the village’s 2,000 residents had joined in a frenzied treasure hunt, combing every inch of the waterfront, digging around dilapidated fishing boats, even sleeping on the beach to protect their few square feet of sand and the untold fortune the plot could contain.

Since late September, their search has turned up hundreds of pieces of gold and silver jewelry, ornaments, and golden nuggets that washed up on their shore, offering the villagers a baffling and wondrous — if short-lived — reprieve from Venezuela’s seemingly endless economic collapse.

Dozens of villagers said they had found at least one precious object, usually a gold ring, with unconfirmed reports that some had sold their discoveries for as much as $1,500.

To many here, the unexpected bounty was a message of hope.

“This is God, setting his agenda,” said Ciro Quijada, a local fish plant worker who found a gold ring.

No one knows where the gold came from and how it ended up scattered along a few hundred feet of Guaca’s narrow, workaday beach. The mystery has merged with folklore, and explanations draw equally on legends of Caribbean pirates, on Christian traditions and on the widespread mistrust of Venezuela’s authoritarian government.

The jagged coastline around Guaca, on Venezuela’s Paria peninsula, is punctuated with bays and islands that have long given refuge to adventurers.

It was on this peninsula, in 1498, that Christopher Columbus became the first European to set foot on the South American continent, thinking he’d found the entrance to the Garden of Eden.

Later, this sparsely defended coastline was regularly raided by Dutch and French buccaneers. Today, it is a haven for drug and fuel smugglers and modern-day pirates who prey on fishermen. 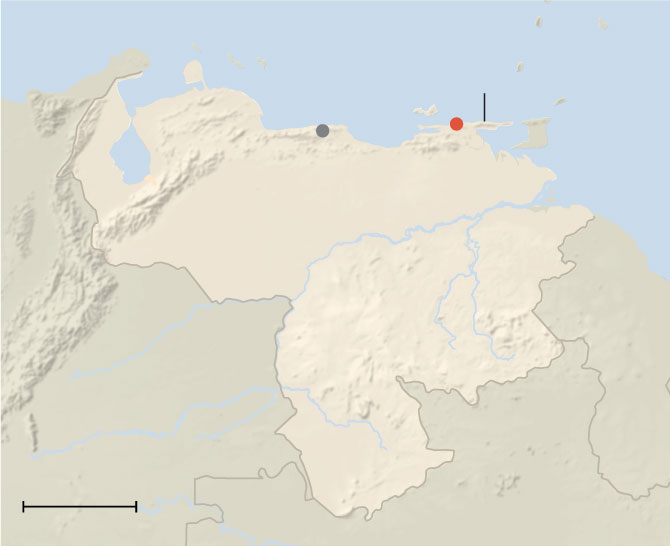 By The New York Times

Did a storm disturb a pirate treasure chest or break open up a sunken colonial frigate? Did the bounty come from modern smugglers heading to nearby Trinidad? For weeks, Guaca was rife with speculation.

Government opponents said officials may have sprinkled the gold on the beach to calm protests by local residents against the terrible living conditions. Others fretted the government would send soldiers to confiscate their treasure.

Some villagers called the gold a blessing, others a curse that would doom anyone touching it.

Once the first photo of the discovery was posted on Facebook, the news spread around Venezuela. But the area’s remoteness, the widespread shortage of gasoline and the coronavirus quarantines prevented a national gold rush.

A chemical test commissioned by The New York Times on a link of gold chain discovered on Guaca’s beach indicated the piece was likely manufactured in Europe in recent decades.

The test showed the chain was made of high-quality, 18-karat gold uncommon in Venezuela’s domestic jewelry production. The alloy would have been difficult to produce in pre-modern conditions, said Dr. Guy Demortier, a jewelry-authentication specialist based in Belgium.

Chris Corti, a technical expert in jewelry-making based in Britain, examined photographs of several objects discovered in Guaca and said they appeared to have been commercially manufactured in the mid-20th century.

But he cautioned that more analysis was needed to make a firm determination about the date and origin of the pieces.

The source of Guaca’s treasure may never be known. The villagers almost immediately sold the objects they discovered to buy food.

“Whatever we get, goes straight in the mouth,” said Hernán Frontado, a fisherman and Mr. Lares’s father-in-law, who had to beg neighbors for cassava, the cheapest local staple, to feed his family before finding several pieces of gold jewelry.

Mr. Frontado sold his finds in Carupano, the closest city, for less than what he thought they were worth to buy rice, flour and pasta.

Before Venezuela’s economic crisis began in 2014, Guaca and the surrounding villages supplied Latin America with sardines and canned tuna. Today, only eight of the 30 rudimentary sardine warehouses in the area still operate; the nearby tuna canning factories, run by the government, have gone bust.

Crippling fuel shortages this year have tipped the downturn into a daily fight for survival for many villagers.

To obtain any gasoline for their boats, the villagers have to sell half their sardine catch to the government at a set rate equivalent to just 1.5 cents for a pound.

“The government doesn’t care about us at all,” said José Campos, a sardine fisherman. “We keep giving them fish, and we get nothing in return.”

Fuel became so scarce this year that many fishermen had to row out to the open sea, or stay out in their small, exposed boats for days to preserve gasoline, braving storms, thirst and pirates.

“It got so bad, I felt as if a rope was tightening around my neck,” said Mr. Lares, who first discovered the gold.

He made $125 from the objects he found — by far the biggest sum he ever made at once.

Mr. Lares used the money to buy staples in bulk. He also bought some sweet breads for his children — the first treat they’d had in years. He fixed a broken television and bought a used speaker, giving his family some entertainment in their earthen-floor home without indoor plumbing, where six people share one bed under a leaking roof.

The treasure has allowed his family to go back to eating twice a day. His youngest child, 2-year-old Thairy Lares, has gained weight in the past month, though she is still malnourished.

The television is now on at all hours, its fuzzy image showing a happy, prosperous nation. Venezuela’s state channels are the only ones available in Guaca.

The village’s situation has looked up since the appearance of gold. Sardines have come back to Guaca’s shores after a four-month absence, and the gasoline supply has improved slightly.

Every morning, the village bursts into frantic activity when the sardine boats arrive with their catch, drawing hundreds of people to the coastal strip.

In small groups, they set to unloading, cleaning, gutting and packing the catch in coordinated silence. The tapping of carving knives and the cries of sea gulls are the only sounds accompanying their methodical work. The village’s most vulnerable residents stop by to collect their daily fish rations for free.

Mr. Lares has returned to his routine, but still keeps a pair of simple gold earrings decorated with a star. Despite the pressing need, he doesn’t want to part with them because they remind him of the ancient navigators who crossed the Caribbean guided by the stars.

“It is the only pretty thing that I have,” he said.

The treasure did not change Mr. Lares’s life, but it reminded him that good things can happen, even amid hardship.

Months after the first discovery, Guaca’s residents still occasionally find small golden objects in the sand. At sunset, when the beach goes quiet, a few residents can be seen sitting by the surf, running their hands through the sand in the fading light.

“If it happened once,” Mr. Lares said, “it will happen again.”