North Dakota’s most famous restaurant critic has been eating at home lately. It’s not that there’s nowhere to go in and around Grand Forks, where she lives and writes. Her governor, Doug Burgum, has allowed restaurants and bars to stay open even though the state has had the third-highest death rate from Covid-19 over the past week.

It is not that Ms. Hagerty is running out of steam at 94, either. She files three columns for the Grand Forks Herald each week, even though she has officially retired from the paper “two or three times,” as she puts it. She had already been retired for at least two decades when, in 2012, she wrote a column that chronicled the arrival of her town’s first Olive Garden.

Ms. Hagerty’s account, written in her usual style of valuing factual data above critical appraisal, sent the internet into convulsions. An overnight sensation in her 80s, she appeared twice on Anderson Cooper’s syndicated talk show and signed a book deal with Anthony Bourdain’s imprint.

Today she calls this whirlwind period “the time when I was viral.” That has a different ring this year, though, which is what led her to think twice about the wisdom of sticking to her usual busy dining calendar. 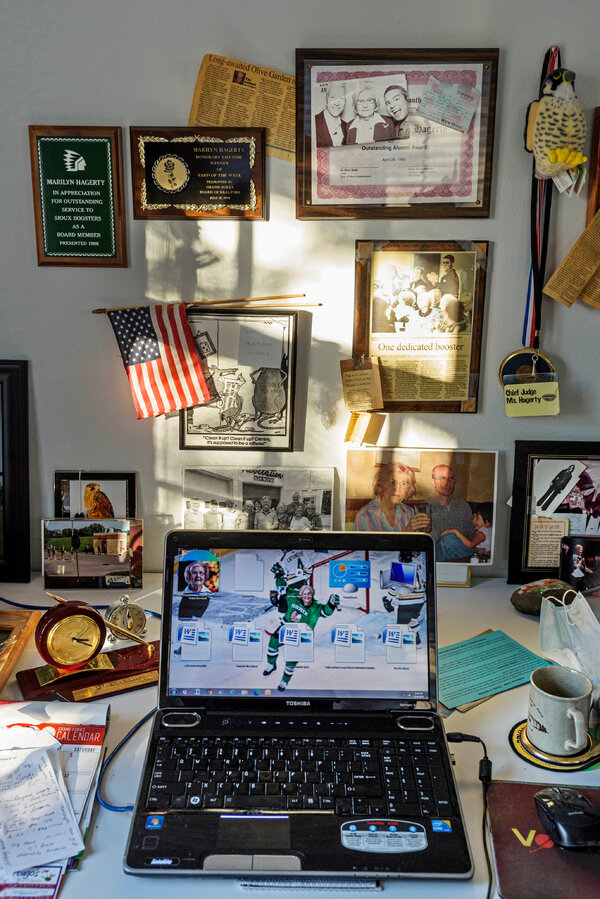 Ms. Hagerty has lived alone since the 1997 death of her husband, Jack Hagerty, who had been editor of the Herald. “She was going on as normal,” said her son, James R. Hagerty, until about a month ago, when she told him during a phone call that she had gone to a truck stop for breakfast. This was around the time that North Dakota’s Covid-19 outbreak was becoming the worst in the country.

“You know, that’s probably not a good idea,” he remembers saying.

“Well, we were all wearing masks,” she said.

“But you had to take the masks off to eat, right?”

After some familial back and forth, Ms. Hagerty decided to restrict her professional dining to takeout and delivery until going out in Grand Forks is safer.

For a restaurant critic in New York City, hearing about Ms. Hagerty’s experience of 2020 can be like glimpsing an alternate reality. Hundreds of New York restaurants have gone out of business this year, from places with national reputations like Blue Smoke and Uncle Boons to scruffy neighborhood coffee shops that looked as if they might return until the day a “For Rent” sign appeared in the window.

In and around Grand Forks, though, Ms. Hagerty could not think of any restaurants killed off by the pandemic. She did know of one that was temporarily shut.

“The Ramada Inn has a cafe where they serve a very nice Sunday breakfast and that’s closed, but the bar in the Ramada Inn is open,” she said. “They are serving dinner in there.”

Of course, Grand Forks, a city of about 50,000 people, had fewer restaurants to begin with. One result of this is that Ms. Hagerty circles back to write about places she has already reviewed more frequently than is typical for her professional peers in larger cities. She has returned to take the temperature of the Olive Garden several times, most recently in February, when she ordered the same meal she had immortalized eight years earlier.

“Fettuccine Alfredo has 1,010 calories and is $12.99,” she wrote. “The salad was nicely chilled. But since there were only two black olives to be found, I asked for more.” In her original review, Ms. Hagerty had noted that the salad contained “several” olives, which seemed to satisfy her.

Her last indoor restaurant meal, before she agreed to stay home for a while, was also a return engagement: The Blue Moose Bar & Grill, a pub across the Red River in East Grand Forks, Minn.

Nathan Sheppard, one of the owners, said that when Ms. Hagerty shows up unannounced at the host stand, every 12 to 18 months or so, it does not kick up the kind of stir that you might have seen on TV or in a movie.

“Usually one of the floor managers comes back and tells me, ‘Hey, Marilyn’s here,’” Mr. Sheppard said. “If she sees something negative, she’ll politely mention it, but she doesn’t Gordon Ramsay it and start throwing plates around and saying, ‘This ratatouille is garbage.’”

Ms. Hagerty’s Blue Moose update approvingly noted the consistency of the cooking over time, but safety was clearly on her mind, too. Face coverings are required in all indoor public spaces in Minnesota, and Ms. Hagerty reported that the restaurant offered masks to customers who had forgotten theirs. Attention was paid to social distancing, too. “The Moose operates cautiously,” she wrote.

A few Blue Moose customers have asked if they really had to wear a mask, Mr. Sheppard said, but not many, particularly now that Covid is a familiar presence in the area. “In March you still heard people talking about whether or not this is even real, because they don’t know anyone who has it,” he said. “Now everyone knows someone in their personal life who has it.”

Some restaurant owners in North Dakota resisted masks until about a month ago, when Governor Burgum announced a one-month order mandating face coverings at indoor businesses. Ms. Hagerty recalled going to a Grand Forks tavern for hamburgers shortly before the governor’s action and being concerned by the number of unmasked customers milling around the bar. She and her dinner companions wore masks.

“I was with two of my lady friends, and we’re not spring chickens,” she said. “They kind of looked at us funny, but that doesn’t bother me. I go everywhere.”

While she is best known to outsiders for writing about the national chains that play a major role in the local dining scene, Ms. Hagerty has also written about places serving Thai, Vietnamese and Somali cuisine.

Ms. Hagerty’s two other weekly columns are not about food. She writes one in the form of a letter bringing some out-of-town friend up to speed on the latest goings-on in Grand Forks. The other she fills with odds and ends that happen to catch her eye.

“I just write about sort of half-crazy things,” she said. “Kind of like what you’d tell your friends but you wouldn’t put in the paper, but I do put it in the paper.”

For these pieces, the Herald pays her a freelance rate. Ms. Hagerty said jokingly that the paper probably doesn’t have the heart to fire her. Anyone in journalism, though, will suspect that her editors know the value of a reporter who files three times a week and never runs out of ideas.

“She’s not doing it for the money,” Mr. Hagerty, who writes obituaries for The Wall Street Journal, said of his mother. “She’s doing it to stay sane. She refuses to be an old person.”

Even in her self-imposed house arrest, Ms. Hagerty has not been at a loss for subjects. She has reported on the search for smaller Thanksgiving turkeys, the adaptations for pandemic safety made by the dining hall at the University of North Dakota, and the holiday rush at a 71-year-old candy shop whose chippers, chocolate-covered potato chips, may be Grand Forks’s second-greatest claim to gastronomic fame.

“Right now, there’s a box of Widman’s chippers on the way to Italy,” she wrote.

And, of course, Ms. Hagerty has written about takeout. This has given her fresh angles on familiar subjects, allowing her to tell readers which places have curbside service or a dedicated pickup window. And it has offered her an opportunity to experience the Olive Garden in a different way.

She brought the restaurant’s shrimp scampi and some other items home last week, she said. She seemed disinclined to tip her hand before her thoughts came out in print, but it sounded as if some subtle reassessment was underway.

Her verdict was posted on her paper’s website on Saturday. “Somehow shrimp scampi tastes better to me inside the Olive Garden than in a take-home format,” Ms. Hagerty wrote. “But in these days of coronavirus, dinner at home has its appeal.”