The Prime Minister said tonight: “What I’ve said to our negotiators is that we’ve got keep going, and we will, I will go to Brussels, I will go to Paris, I will go to Berlin or wherever to try to get this home. There’s always the possibility or prospect of coming out on Australian terms, which I believe are very good terms, and we as I say can prosper mightily in that future which is just around the corner.”

Fishing remains one of the three most contentious areas in trade talks.

Mr Macron is refusing to back down on his demands for French fishermen to have continued access to UK waters after the EU transition period ends on December 31.

But Mr Johnson has remained steadfast in his insistence the UK must take back control of its waters beyond the end of the year.

The Prime Minister held an emergency Cabinet meeting over conference call this evening to update his top team on negotiations. 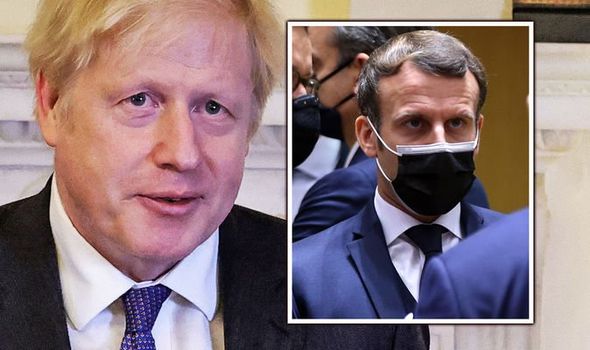 “They agreed very strongly with me that the deal on the table is really not at the moment right for the UK,” he said after the meeting.

“Many years now after people have voted to leave the EU, we wouldn’t still have control of our waters.

“The Cabinet agreed very strongly that we’re really not there yet at all.”

Last night the Prime Minister flew to Brussels to have dinner with the European Commission President Ursula von der Leyen to discuss the outstanding blockages to a deal.

Over the seafood meal, Mr Johnson outlined to his European counterpart he would not back down on his red lines.

Their discussion was described as “frank” by a No10 source, while the EU said it was “lively”.

The senior No10 sources said: “The Prime Minister and von der Leyen had a frank discussion about the significant obstacles which remain in the negotiations.

“Very large gaps remain between the two sides and it is still unclear whether these can be bridged.

“The Prime Minister and von der Leyen agreed to further discussions over the next few days between their negotiating teams.

“The Prime Minister does not want to leave any route to a possible deal untested. The PM and von der Leyen agreed that by Sunday a firm decision should be taken about the future of the talks.”