The good news is that safe and effective vaccines from Moderna and Pfizer appear to be on the way soon and that more are likely to follow.

The bad news is an usual combination: There won’t be enough vaccine on hand to meet initial demand, yet there is also a need to urge everyone to get shots.

I have some suggestions: An unusual type of charity auction, a bit of technology and a few nudges can help.

The problem that needs to be addressed very quickly is how to allocate the roughly 20 million (two-dose) vaccinations that may be available in the United States in December and January. Although states will be given the final authority, a Centers for Disease Control and Prevention panel recommends that the initial distribution go to two groups. The first are frontline health care workers; the second, residents of nursing homes, where a disproportionate number of Covid-19 deaths have occurred.

These groups are worthy, but many others deserve high priority as well. These include teachers, food workers, people with comorbidities and those over 65. The dilemma is that as many as 140 million people may be in one or more of those categories, and even if everything goes smoothly, it will take well into the spring before they can all be vaccinated. (For an idea of where you might rank in the line, check this.) Given that supply chains strained to keep up with the demand for mundane goods like flour and paper towels early in the pandemic, the distribution of vaccines won’t be easy.

All this means that demand will exceed supply for quite a while. 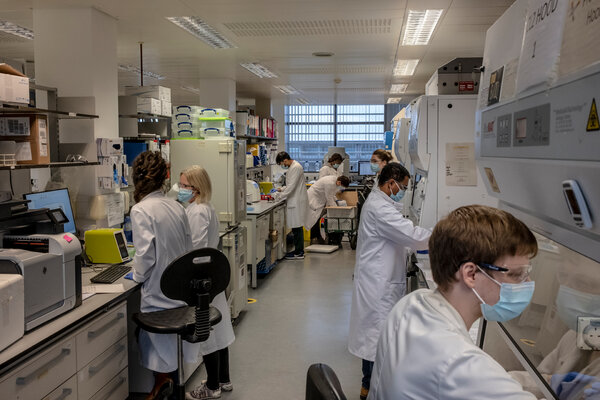 Economic theory offers a standard method for dealing with shortages. It is, basically: Let markets work. This would mean that those willing to pay the most would get the vaccine first.

Wisely, policymakers are not following this course. Nurses, other frontline workers and most nursing home residents could not win a bidding battle with billionaires. And, to be clear, they should not have to!

Yet there is a small but useful role that prices might play in determining who gets priority in the second round of vaccines, after the first 20 million people have gotten their shots.

At that point, perhaps sometime early this winter, suppose a small proportion of doses are sold in what would amount to a charity auction.

Who might be the winning bidders? Very wealthy individuals and high-tech companies are likely to account for some of the demand, along with businesses that employ high-profile talent like professional athletes and entertainers.

Just imagine how much the National Basketball Association, whose season will start around Christmas, would be willing to pay to ensure that none of its players or staff would be infected! The same goes for Hollywood studios and television production companies that are eager to go back to work.

The prospect of selling off precious vaccine to celebrity athletes and entertainers, hedge fund magnates and high-tech billionaires may strike you as utterly immoral, exacerbating the inequality this disease has already inflicted. But before you dismiss this idea as outrageous, let me make three points.

First, the very purpose of the charity auction would be to redistribute money from the rich to the poor. Think of it as a voluntary wealth tax. This money could be used to help people who have suffered most in the pandemic: those who have lost their jobs and face evictions, whose health has been permanently impaired, who face grievous hardship of all kinds.

Depending on the prices and quantities, billions of dollars could be raised that could be spent to help those who need it most. Robin Hood in action!

Second, be realistic. The alternative to this sort of legal market is almost certain to be a black or gray market for early vaccinations, which might be obtained by hopping on a plane to another jurisdiction, or via entrepreneurial intermediaries. As the bioethicist Arthur Caplan of New York University says: “Anything that’s seen as lifesaving, life-preserving and that’s in short supply creates black markets.”

Deep-pocketed sports leagues have already managed to conduct daily testing with quick results. If the rich and powerful are going to find a way to jump the line in any case, why not make sure that the payments made to grease the skids go to a good cause?

Third, one reason that the charity auction feels wrong is that it makes transparent what is typically opaque: Rich and powerful people in every society manage, one way or another, to obtain superior health care. Is that immoral? Perhaps it is. But it would be naïve to pretend that it doesn’t happen. And it would be a shame to let that naïveté prevent the transfer of much-needed money from the rich to the poor. Are the “facilitators” who would make the same thing happen in other ways more deserving?

The Road to a Coronavirus Vaccine

Words to Know About Vaccines

Confused by the all technical terms used to describe how vaccines work and are investigated? Let us help: