HOUSTON — The cars began filing into the parking lot shortly after 6 a.m., snaking around police officers who directed traffic to masked volunteers standing ready with boxes of frozen pizza, tortillas and brown bags of canned food.

The coronavirus pandemic pushed many of the hundreds of families to the drive-through food pantry, but among the several immigrant families in line, another cause was at work: President Trump’s newly expanded regulation that blocks access to green cards for legal immigrants who are deemed likely to accept any government assistance. Even with citizen children who clearly qualify for federal assistance, undocumented immigrant parents are eschewing programs like food stamps and are flocking to food pantries.

That, in turn, is badly straining relief agencies and presenting a challenge to President-elect Joseph R. Biden Jr., who could confront rising hunger by expanding government programs but will not be able to quickly undo the Trump administration’s expansion of a Clinton-era regulation that is pushing immigrant families away from those programs.

Dani, a 34-year-old undocumented immigrant from Honduras and the mother of three daughters, said she was alarmed early in the Trump administration when the president described immigrants as criminals and called for deportation raids. But she changed her behavior and dropped off food stamps and Medicaid in 2018 when the administration announced its so-called public charge rule, expanding the authority of officials to deny green cards to immigrants who might need public assistance.

On Wednesday, the Ninth Circuit Court of Appeals ruled against the Trump administration when it upheld preliminary injunctions against the public charge rule, deciding that the regulation was most likely not a reasonable interpretation of federal immigration law. But even as the policy continues to be litigated, it has already spread fear and confusion throughout immigrant communities.

The Clinton administration instructed officials to deem immigrants a “public charge” in limited circumstances, like if they were receiving government cash benefits. But the Trump administration effectively created a wealth test for immigrants seeking permanent residency by rendering inadmissible applicants deemed likely to use a broad range of safety net programs.

Some undocumented immigrants who have resided in the country for many years fear that using public benefits for their families could undermine their chances of securing permanent residency if a new Congress ever provided amnesty. If denied a green card, they believe that they would then become vulnerable to deportation.

Unauthorized immigrants are already ineligible for most welfare programs, but multiple researchers have said the policy has prompted thousands of families to drop off the benefit rolls, even if their American-citizen children could use such programs with no effect on their immigration applications — families like Dani’s. 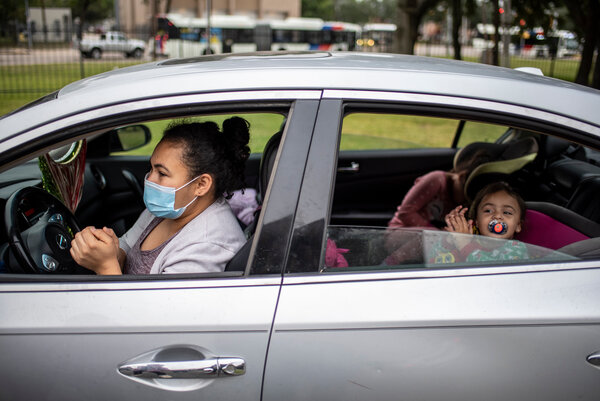 “I remember all that about the public charge and everything, and I cannot sleep,” said Dani, who was especially concerned about her efforts to obtain a green card so she could stay with her children. “What’s going to happen if I’m deported? What happens if I’m sent away?”

While some of Mr. Trump’s executive actions can be rolled back quickly by the incoming Biden administration, the public charge regulation, which went through the laborious regulatory process before it was enacted, will prove arduous to rescind if it is ultimately upheld by the courts. And reducing the distrust in the government it has caused will be a major challenge for Mr. Biden’s pick to lead the Department of Homeland Security, Alejandro N. Mayorkas, the first Latino and immigrant chosen for that role.

The department, which handles immigration matters like the issuance of green cards, has purview over the public charge rule.

“The fear has risen to such a pitch that it will be a real challenge to assuage families’ fears. They are focused on public charge, but not solely public charge,” said Cheasty Anderson, the director of immigration policy and advocacy at the Children’s Defense Fund-Texas. “There isn’t going to be trust in the federal government among immigrant communities who are currently afraid and intimidated until they stop feeling attacked by the federal government apparatus.”

T.J. Ducklo, a spokesman for Mr. Biden, reiterated that the president-elect would work to roll back the public charge rule and was committed “to engaging with communities from Day 1 to ensure that they are able to access the care that is available to keep their families safe and healthy.”

A survey of 949 members of immigrant households conducted by the Urban Institute found that more than 20 percent of immigrant adults avoided public benefits like food stamps, housing subsidies, Medicaid or the Children’s Health Insurance Program out of fear of risking future green cards in 2019. Researchers for Ideas42, a nonprofit research organization, estimated that 260,000 children nationwide were removed by their parents from nutrition and health care programs after the announcement of the rule.

That estimate was based on a study that found 79,000 children withdrew from Medicaid in five states: California, New Jersey, Tennessee, Texas and Washington.

The Trump administration said the rule was necessary to ensure that immigrants who come to the United States were self-sufficient and not a drain on taxpayer resources. After announcing the policy, Kenneth T. Cuccinelli II, a top homeland security official, revised the iconic sonnet on the Statue of Liberty by saying the United States would welcome those “who can stand on their own two feet.”

The administration had also predicted the chilling effect. In the final rule, Kevin K. McAleenan, the acting homeland security secretary at the time, wrote that the policy might cause foreigners and American citizens in households with unauthorized immigrants “who may otherwise be eligible for public benefits” to drop out of the programs. The agency estimated that could save the federal government nearly $2.5 billion annually.

The effects have been acute among immigrant families in Texas, according to a report released in November by the Children’s Defense Fund, which compiled data from 32 social services organizations around the border state. Ms. Moore’s organization reported a 37 percent decline in food-stamp enrollment from 2016 to 2019 among a clientele base made up of more than 80 percent immigrant families, even while demand at the organization’s food distribution site shot up 327 percent.

Another organization, VELA, a nonprofit that assists families of disabled children with a membership that is 85 percent immigrant, reported an 80 percent drop in food stamp enrollment from 2017 to 2019.

One of those who dropped off was Guillermina, a mother of three in Austin, Texas, who like other parents interviewed for this article declined to use her full name for fear of retaliation from the government. After hearing about the public charge rule, Guillermina withdrew from food stamps in 2018 and let her health insurance expire.

Anything but the essentials suddenly became a luxury.

“The biggest limitation for us was meat and protein. That was the most expensive thing,” Guillermina said. “The big thing was being able to know how to ration that item so we could include it in small bits throughout the week.”

The lack of health insurance meant she could no longer send her 4-year-old son to speech therapy. Without therapy sessions, Guillermina’s 11-year-old daughter, who has autism, began to forget techniques she had learned for household tasks, resulting in bursts of anger.

“The thing with public charge is it’s something that didn’t just affect me,” Guillermina said. “It affected all my family members, so many families I know in the process of fixing their papers — this fear of feeling like I never could access my benefits without the risk of deportation.”

In McAllen, Texas, Nailea Avalos, a 32-year-old mother of three who has worked for years as a waitress, took a deep breath and began to cry at the mention of the public charge rule. Originally from Mexico, she used public benefits to supplement her income as a waitress and her husband’s earnings from construction until 2016, when a friend told her Mr. Trump could soon punish those who used assistance.

She grew used to rationing food.

But in 2018, her daughter Xiomara, 8 at the time, showed how much she needed Medicaid. When an asthma attack impeded Xiomara’s breathing for a week, Ms. Avalos said she used a nebulizer she still had from an earlier illness of her son’s rather than taking her daughter to a hospital. When Xiomara’s struggles continued, she took her across the border to Reynosa, Mexico, for medical treatment.

“I felt like I wasn’t a good mother, that I wasn’t taking care of my child,” Ms. Avalos said.

When her husband lost his job in construction during the pandemic, she was driven back to public benefits. She has been told that using government assistance for her citizen children will not affect her green card eligibility, but she said she was still filled with anxiety.

“We’re leaving it to God, but we’re also hoping if we have a new administration and a new president, that all that changes,” Ms. Avalos said, adding that she hoped Biden administration officials “just have a conscience.”

Some of the parents using the food pantry in Houston said they re-enrolled in the public benefits programs only because they lost their jobs in the pandemic. But parents like Dani said they still felt more comfortable waiting for hours with their children in line at the drive-through food pantry.

“They should have the food stamps that they’re eligible for because these people need to be able to put food on the table for their children that are United States citizens,” said Ms. Moore, of Epiphany Community Health Outreach Services. “The collateral damage is to the children.”

As a case manager approached driver-side windows to speak to the parents, the line of vehicles threatened to extend beyond the parking lot. Police officers would need to tell more drivers to come back another time.

Tags: Green Card i Welfare in the US