A powerful cold front is expected to blast the UK with freezing fog over the next couple of days, forecasters have said. The Met Office predicted the UK could experience its most extreme night of the season tonight as temperatures plunge to sub-zero lows of -5C in some areas of northern Scotland. Northern Ireland may shiver with lows of -4C, while Birmingham is expected to reach a bitter -3C. The latest temperature models on WXCHARTS show the whole of the UK covered in a swathe of freezing air overnight as the charts turn blue.

The Met Office said: “Tonight will be one of the coldest nights of the season so far.

“Away from the far southeast, where cloud cover may keep temperatures just above freezing, many of us will wake up to a frost on Thursday morning, with lows of -3C to -5C in some rural areas.”

A blanket of freezing fog is also expected to sweep over the UK, which may result in cars icing up and roads covered with a layer of frost.

The BBC Weather has warned this frost and fog could become a “primary hazard” this week. 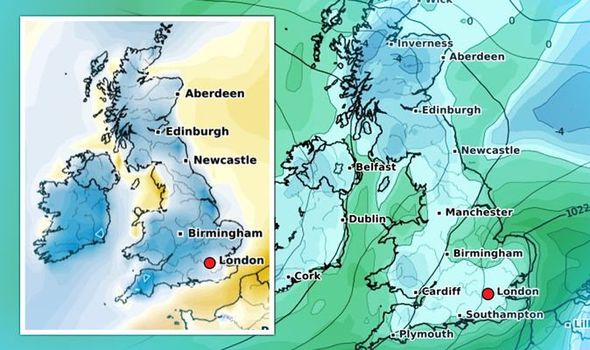 The forecast said: “Overnight frost and locally dense patches of fog will become the primary hazards through the rest of the week, with Thursday night into Friday especially prone to both of these hazards.

“A little more breeze from the southeast on Friday and Saturday will reduce the threat of overnight frost and fog, but Sunday night is looking frosty again, particularly in the south.

“A lot of dry weather to come from Thursday onwards, but occasional rain in the far northwest this weekend.”

BBC Weather also warned the UK will be “colder than normal” for the year over the next few days due to a high pressure system moving over towards eastern areas. 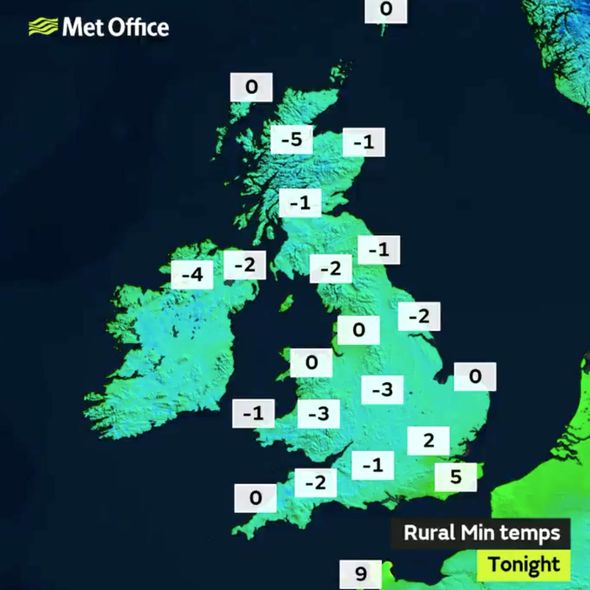 The forecast said: “High pressure is likely to linger over the UK and gradually shift east from Friday and over the coming weekend.

“This will keep things colder than normal and mostly dry, but a weak front will bring some cloud and damp to northern Scotland.

“By Sunday there is a chance of some rain spreading into western areas as high pressure shifts away.”

Ahead of tonight, BBC Weather also tweeted: “Some of the coldest weather of the autumn so far is heading our way this week, starting off with a very chilly night tonight.”

The latest forecast from the Met Office added eastern parts of the UK could experience the worst of the cold. 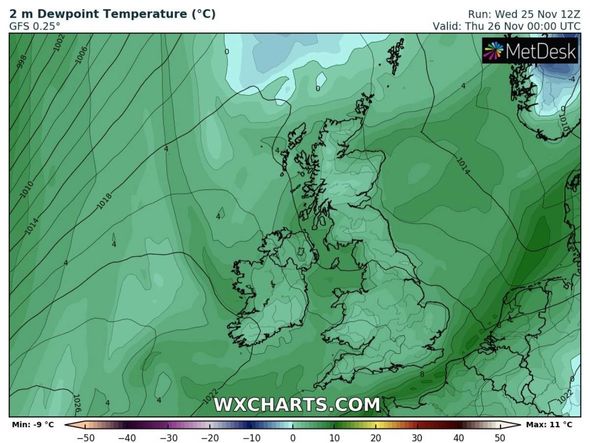 It said: “Early evening cloud and patchy rain over eastern and southern England gradually becomes confined to the far southeast of England.

“Elsewhere, mostly dry but also cold with some frost and likely some fog and freezing fog patches about by dawn.”

He said: “A slow-moving cold front brought a lot rain across parts of Scotland and Northern Ireland yesterday. 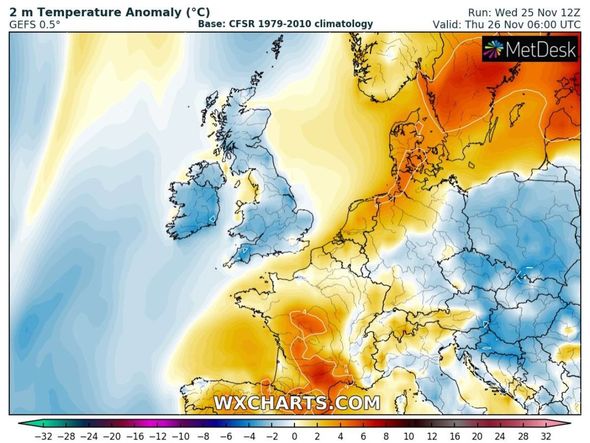 “The same front has now got a move on and will clear England through today, with increasingly dry and sunny conditions following across northern and western areas while turning less mild too.

“A ridge of high pressure will build in for rest of the week settling the weather down with lighter winds and mostly dry conditions.

“But there will be an increasing risk of frost and fog forming overnight as a result. 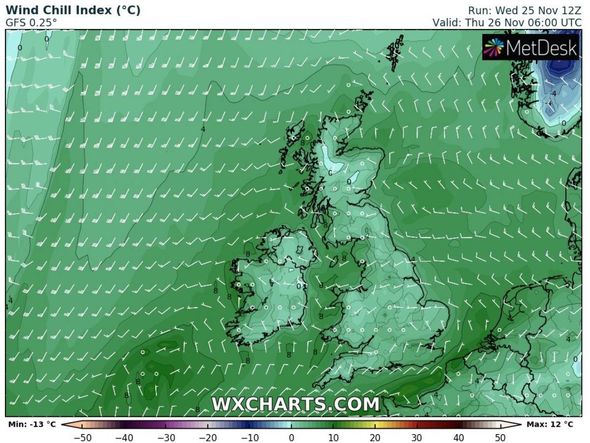 “It will turn colder by day too, temperatures remaining in single figures for all on Friday. Dry and settled but chilly conditions continue through the weekend, with a risk of overnight frost where skies clear and also risk of mist and fog first thing in the mornings.”

Leading bookmakers Ladbrokes even claim December could go down as the coldest on record.

Alex Apati of Ladbrokes said: “It’s looking increasingly likely next month will be a record-breaking cold December as temperatures prepare to tumble.”