WASHINGTON — Teams from President-elect Joseph R. Biden Jr.’s transition began reaching out across Washington on Tuesday, freed for the first time to interact with their counterparts in the government after President Trump’s administration ended its two-week blockade of an orderly transfer of power.

Mr. Trump authorized intelligence agencies on Tuesday to begin briefing Mr. Biden on classified information delivered in the President’s Daily Brief. Officials said the briefing would be scheduled soon, but did not provide details. Mr. Biden said he planned to be briefed “on a regular basis.”

Transition officials said teams had made contact with every federal agency to begin setting up meetings. About 20 of those meetings took place on Tuesday, including at the Department of Homeland Security and the Education Department. Officials said the reception from the Trump administration was responsive and helpful.

Mr. Trump had relented on Monday in his refusal to allow a formal transition to begin, while still refusing to concede defeat and vowing on Twitter on Tuesday morning that “our big lawsuit” will be filed soon and declaring “RIGGED ELECTION!” Within hours, Mr. Biden’s team moved to quickly make use of the 57 days left until the inauguration.

Mr. Biden had warned that the holdup of the transition threatened national security by depriving his team of critical briefings and put the distribution of coronavirus vaccines at risk if his advisers could not work side by side with current health officials. In an interview with “NBC Nightly News” on Tuesday, Mr. Biden said he was pleased by the administration’s belated decision to let the transition proceed.

“I think we’re going to not be so far behind the curve, as we thought we might be in the past,” Mr. Biden said. “And there’s a lot of immediate discussion, and I must say, the outreach has been sincere. There has not been begrudging so far. And I don’t expect it to be.”

On Wall Street, the stock market surged on the news that a robust transition was set to begin, with the Dow Jones industrial average surpassing 30,000 for the first time. Investors appeared buoyed by Mr. Biden’s choice of Janet Yellen, a former chair of the Federal Reserve, to serve as Treasury secretary.

Mr. Trump, in an appearance at the White House that lasted only about a minute, sought to take credit for the market’s rise.

“The stock market’s just broken 30,000. Never been broken, that number,” Mr. Trump told reporters without taking questions. “That’s a sacred number, 30,000. Nobody thought they’d ever see it,” he said, adding, “I just want to congratulate all the people within the administration that worked so hard.” 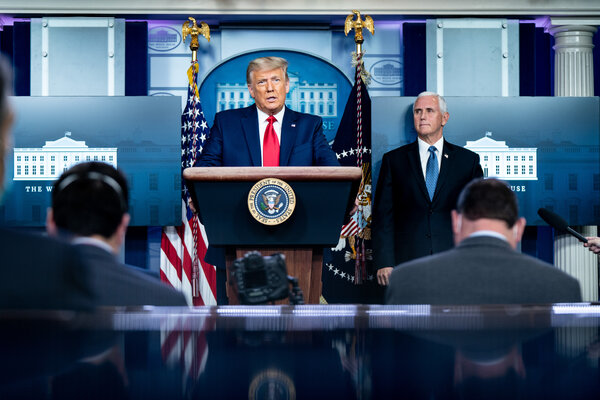 The transition officially began on Monday evening, when Emily W. Murphy, the administrator of the General Services Administration, sent Mr. Biden a letter saying that as the apparent winner of the election, he was entitled to government office space, resources and the ability to coordinate with administration officials.

That process is governed by legislation and several memorandums of agreement signed months ago by the two sides, including a pledge from the White House chief of staff to ensure that Mr. Biden, if he won the election, would receive up-to-date information about threats facing the country.

In a memorandum sent to White House employees late Monday night, Mark Meadows, the chief of staff, reminded them to conduct all work-related communications with White House email accounts. And he said records must be preserved.

He also warned, in bold letters, against unauthorized contact by the White House staff members — known as members of the Executive Office of the President — with members of the Biden transition team.

“Unless specifically authorized,” he wrote, “E.O.P. personnel are not permitted to speak directly with a member of the Biden transition team or the federal transition coordinator.”

The warning underscored the sensitivity that usually accompanies discussions between administrations during a transition and the need for confidentiality.

With the pandemic raging, Biden transition officials are especially eager to start coordination with officials at the National Institutes of Health and the Centers for Disease Control and Prevention, and members of the Operation Warp Speed project, which has a role in vaccine distribution. Transition officials have said they want to begin receiving official government data about the number of cases, hospitalizations and deaths from the virus.

Ms. Murphy’s letter on Monday prompted an almost immediate acknowledgment from the Department of Health and Human Services, the hub of the administration’s pandemic response. Alex M. Azar II, the health secretary, said on Tuesday that Rear Adm. Erica G. Schwartz, the deputy surgeon general, had communicated on Monday with the Biden team.

“We will ensure coordinated briefings with them to ensure they’re getting whatever information that they feel they need,” Mr. Azar said.

Transition briefings are likely to center on the health department’s evolving plans to distribute a coronavirus vaccine, a vast and complicated effort that the department is coordinating with the Pentagon and the C.DC. The first doses could be administered as soon as mid-December if the Food and Drug Administration authorizes Pfizer’s candidate for emergency use.

Transition officials have also been eager to talk to Dr. Anthony S. Fauci, the government’s top infectious disease expert. Mr. Biden told reporters on Tuesday that his staff had spoken to Dr. Fauci, but that he had not. “He’s been very, very helpful,” Mr. Biden said.

One top official at the Centers for Disease Control and Prevention said on Tuesday afternoon that the Biden team had yet to communicate with top agency staff members, but that a team of career scientists had prepared an extensive set of public health briefing materials, including on the agency’s role in vaccine distribution.

At the Food and Drug Administration, where regulators are evaluating Pfizer’s vaccine, staff members were told to route all contact through James Sigg, the agency’s chief operating officer. Two top advisers to Dr. Stephen M. Hahn, the F.D.A. commissioner, have spent months compiling what is known as the Covid-19 Pandemic Recovery and Preparedness Plan, a review of the agency’s work this year that they expect to complete in January.

“We are looking forward to continuing the process with the Biden-Harris transition team,” Mr. Muir said on a call with reporters. Mr. Biden’s transition team will get dedicated office space at the Pentagon.

Secretary of Mike Pompeo said Tuesday on Fox News that the State Department “will do everything that’s required by law.”

At the Treasury Department, senior officials told staff members in some offices that they were beginning to compile transition briefing books and that they expected to meet with the Biden transition team soon, according to a person familiar with the matter. A Treasury spokeswoman said the department’s transition team had begun meeting with Mr. Biden’s team.

Chase Jennings, a spokesman for the Homeland Security Department, said the agency held its first meeting with Mr. Biden’s team on Tuesday. A spokeswoman for the Education Department said meetings with the Biden transition team began on Tuesday.

The start of the formal transition also clears the way for government-run background checks of Mr. Biden’s cabinet nominees and other top aides who require high-level security clearances. Those checks, which are conducted by the F.B.I. and other agencies, had also been held up until Ms. Murphy’s decision. Bureau officials said they will investigate potential appointees as the office receives written requests from Mr. Biden’s team.