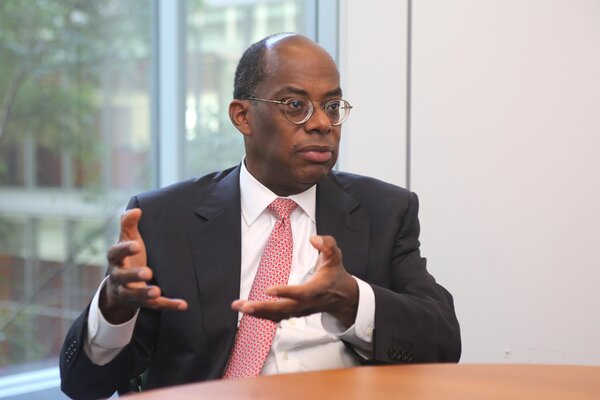 When diversity and ideology collide

President-elect Joe Biden has made assembling a diverse team a priority. He also faces pressure from the progressive wing of his party to limit corporate influence on hires for his administration, avoiding candidates from Wall Street or company boardrooms. But narrowing the candidate pool that way won’t help create a more representative administration, some suggest.

“Big Business is here to help,” said Ron Parker, the chief executive of the National Association of Securities Professionals. He told DealBook that women and people of color in business have “a unique experience that lends itself to being heard.” This week, the N.A.S.P. and seven other trade groups sent a letter to Mr. Biden urging him to prioritize diversity in top economic policy positions and to “reject demands for a blanket exclusion on potential appointees with experience in the corporate sector or financial services field specifically.”

Roger Ferguson, one of the most prominent Black executives in the financial industry, just announced his retirement as the C.E.O. of TIAA. He is on the short list for Treasury secretary (more on that below), and gets Mr. Parker’s support.

Research on racial diversity among financial regulators makes for uncomfortable reading. Of the 327 federal financial agency posts requiring congressional confirmation over the years, only 10 appointees have been Black, according to a recent report by Chris Brummer at the Institute of International Economic Law at Georgetown. When DealBook spoke to Professor Brummer last month, he said those findings had received a lot of attention, perhaps because no one ever quantified the lack of diversity in this way before. He has since been named a member of Mr. Biden’s Treasury Department advisory review team.

The obstacle to more diverse hiring “is not the skill set, it’s the relationships,” said Petal Walker of the law firm WilmerHale, formerly a chief counsel at the Commodities Futures Trading Commission. People tend to hire those with whom they golf or grab a drink, she told DealBook, so it will take “intentional action” to break down established cliques.

The calls to reject corporate candidates ignore U.S. history, said Paul Thornell, a former Senate and White House staff member, of the lobbying firm Mehlman Castagnetti. The generational wealth gap created by a long history of discrimination leaves fewer people of color able to afford taking jobs in government or nonprofits. “Groups from the far left throw out edicts,” he told DealBook, “but these don’t reflect the realities of the American experience or inequality, the racial wealth gap, and may prove counterproductive to diversify the administration and to implement policies that work for all Americans.”

The White House suggests an unusual trade for repealing a key internet law. The Trump administration might be willing to drop its opposition to stripping Confederate leaders’ names from military bases if Democrats were willing to repeal Section 230 of the Communications Decency Act, which shields online platforms from liability for user content.

BuzzFeed is buying HuffPost. It will take over its digital-media rival — with whom it shares a co-founder, Jonah Peretti — from Verizon in a stock deal. It’s the biggest merger this year among digital publishers, which are consolidating to survive the advertising downturn. Mr. Peretti, BuzzFeed’s C.E.O., hinted that he may pursue another takeover.

Investigations into President Trump expand to include tax write-offs. Two inquiries, one by the Manhattan district attorney and one by New York’s attorney general, are examining millions of dollars in consulting fees — some of which appears to have gone to Ivanka Trump — that were later claimed as tax deductions, The Times reports.

The gaming site Roblox files for an I.P.O. The company disclosed in its prospectus that its daily active users nearly doubled over the past year, as screen time surged during the pandemic. But its net losses also quadrupled in the first nine months of the year, despite selling more than $1 billion in virtual “Robux” currency to gamers over the period.

Mnuchin wants his money back

President-elect Joe Biden said yesterday that he has picked a Treasury secretary, whom he will name around Thanksgiving. (Washington insiders think the former Fed chairwoman Janet Yellen is the favorite, but the current Fed governor Lael Brainard and the former Fed vice-chairman Roger Ferguson are also in the running.) But the biggest Treasury news came from the current secretary, Steven Mnuchin, who picked a high-profile fight with the Fed.

The Treasury asked the Fed to return hundreds of billions of dollars. The Fed was given more than $450 billion to support several emergency lending programs at the central bank, which Mr. Mnuchin said he does not plan to extend beyond the end of the year. The programs, which support corporate bonds, municipal debt and loans for midsize businesses, were not extensively used, but investors expected them to continue as the pandemic threatens the economy. The Treasury funds insured the Fed’s programs against losses, so removing them could make it harder for the next Treasury secretary to restart the programs, if needed, next year.

Mr. Mnuchin said the funds are no longer needed, citing liquidity and capital positions of U.S. banks that “ensure they can fulfill the financing requirements of their customers.” In his letter to the Fed chairman Jay Powell, he noted a survey by the National Federation of Independent Businesses that said only 2 percent of small and midsize businesses reported that their “borrowing needs were not satisfied.”

Mr. Powell disagreed. In a statement, the Fed said it “would prefer that the full suite of emergency facilities established during the coronavirus pandemic continue to serve their important role as a backstop for our still-strained and vulnerable economy.” Business groups backed up Mr. Powell, with the Chamber of Commerce saying that the “surprise termination” of the Fed’s programs “prematurely and unnecessarily ties the hands of the incoming administration, and closes the door on important liquidity options for businesses at a time when they need them most.”

Now what? Bharat Ramamurti, who sits on the congressional oversight body overseeing the stimulus programs, said on Twitter that the Fed legally didn’t have to return the funds, and that the Biden administration could ask the central bank to restart the programs next year, making loans using $195 billion in equity that the Treasury has already committed.

Some of the academic research that caught our eye this week, summarized in one sentence:

Will courts be able to handle the coming surge in corporate bankruptcies? (Robin Greenwood, Benjamin Iverson and David Thesmar)

As corporate America commits to addressing racial inequality, two progressive unions will push six large banks to examine how their practices are affecting minority communities, DealBook is the first to report.

Union-led investment groups are calling for racial equity audits at Bank of America, Citigroup, Goldman Sachs, JPMorgan Chase, Morgan Stanley and Wells Fargo. In letters to the institutions, the CtW Investment Group and the SEIU’s Capital Stewardship Program (which say they work with pension funds managing over $1.2 trillion in assets) denounce discriminatory practices, from reduced mortgage lending in minority communities to the treatment of employees of color. The organizers demand that the banks prepare comprehensive reports in consultation with civil rights groups, employees and customers that would then be made public.

“It’s time for the banks to really step up,” Dieter Waizenegger, the executive director of CtW Investment Group, told DealBook. Though many of the banks have already announced racial justice initiatives — like JPMorgan pledging $30 billion to fight racial inequity — “we didn’t really hear a commitment to really take a look at themselves,” he said.

“I don’t want to erase or diminish their statements that Black lives matter or that they’re supportive of racial justice,” said Aaron Ammons, an SEIU member who is a trustee on the Illinois State University Retirement System pension fund. But he added that the campaign “puts them on public record” about their commitments.

Campaign organizers are prepared to file shareholder proposals to put the issue to a vote by other investors, Mr. Waizenegger said. That threat can yield results, according to Tejal Patel, CtW Investment Group’s director of corporate governance: Amazon agreed to ensure women and people of color are included as candidates for board openings after initially opposing the group’s call for a shareholder vote on the matter.

The investment bank Perella Weinberg Partners is reportedly planning to go public by merging with a SPAC. (Bloomberg)

Nasdaq plans to buy Verafin, a maker of software to detect financial crimes, for $2.75 billion. (Reuters)

President-elect Joe Biden is hitting up big donors for money for his presidential transition, as the Trump administration continues to withhold federal funding. (Politico)

The Trump Organization has suspended efforts to sell its Washington hotel, reportedly after several bids were for less than expected. (CNBC)

Facebook says A.I. now detects 95 percent of the hate speech that is removed from its platform. (CNBC)

The economist Mariana Mazzucato, popular in both progressive and libertarian circles, thinks the ways we measure economic growth right now are too narrow. (NYT)

Tyson Foods suspended managers at one of its pork plants after they were accused of betting on how many workers would become infected with Covid-19. (WSJ)

How the pandemic has changed workout habits: The bank analyst Mike Mayo, for one, now plans to enter powerlifting competitions. (FT)