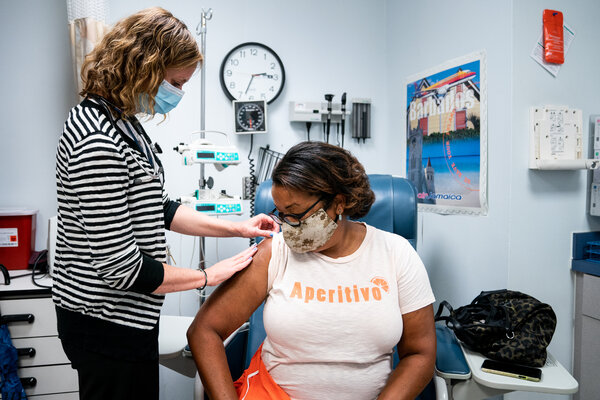 The drugmaker Moderna announced on Monday that its coronavirus vaccine was 94.5 percent effective, based on an early look at results from its large, continuing study.

Researchers said the results were better than they had dared to imagine. But though the company plans to apply for emergency authorization from the U.S. drug authorities within weeks, the vaccine will not be widely available for months.

The vaccine has a longer shelf life than previously reported: It can last 30 days in the refrigerator and 12 hours at room temperature, according to Moderna, potentially making it easier to store and use.

The race: Moderna’s announcement came a week after Pfizer reported that its vaccine, developed in collaboration with BioNTech, was more than 90 percent effective. Ten other companies are, like Moderna and Pfizer, conducting big Phase 3 trials, including efforts in China, Russia, India and Australia. Check our vaccine tracker here.

Markets: Global markets were up on Monday over news of both the Moderna vaccine and a new Asia-Pacific free trade deal.

Official remarks: “I had been saying I would be satisfied with a 75 percent effective vaccine,” said Dr. Anthony S. Fauci, the nation’s top infectious disease expert. “Aspirationally, you would like to see 90, 95 percent, but I wasn’t expecting it. I thought we’d be good, but 94.5 percent is very impressive.”

In other coronavirus developments:

In Spain, a raft of lawsuits has emerged contending that the health care system’s struggle to fight the pandemic has led to neglect of other serious conditions, including treatment and diagnosis of cancer.

Japan became the latest major economy to bounce back from the devastation of the coronavirus, but the recovery is unlikely to be long-lived, analysts warn.

Tourism in New York City will need at least four years to recover from the free fall triggered by the pandemic, according to a new forecast from the city’s tourism promotion agency.

The E.U.’s budget on the line

In a move that threatens to derail the bloc’s long-term budget, Hungary and Poland blocked the European Union’s 750 billion euro — roughly $890 billion — coronavirus stimulus package, putting a total of 1.8 trillion euros on hold and wreaking havoc in the member states.

The two Eastern European countries said they would veto the spending bill because funding was conditioned on upholding rule-of-law standards, such as an independent judiciary, which the two governments have weakened as they have defiantly torn down separation of powers at home.

Their veto has thrown a signature achievement of the bloc into disarray, deepening a long-building standoff over its core principles and threatening to delay the stimulus money from getting to other member states, if a new agreement can be reached at all.

Brexit: Prime Minister Boris Johnson’s two-week quarantine comes at an inopportune moment for his negotiations with the bloc, with major issues still dividing the E.U. and Britain.

Moldova: Maia Sandu, a Harvard-educated economist who supports closer ties with the European Union, has won a presidential election in the former Soviet state against an incumbent endorsed by President Vladimir Putin of Russia.

Biden warns of the risks of a rocky transition

President-elect Joe Biden, in his first economic address since winning the election, called on President Trump to begin the transition process promptly.

Mr. Biden spoke in favor of a national mask mandate and criticized the president and his advisers for attacking leaders of U.S. states that have imposed new restrictions to contain rising coronavirus case numbers. “What the hell’s the matter with these guys?” he said. “It’s totally irresponsible.”

His comments come at a critical time for the country’s economic recovery: Credit card data and other indicators suggest that consumers began to pull back spending this month as infection, hospitalization and death rates from the virus surged nationwide. Mr. Biden called on Congress to provide trillions of dollars in support to workers, businesses and state and local governments.

Earlier this month, Chris Nikic, above, became the first person with Down syndrome to conquer the grueling endurance race, encompassing a 2.4-mile open-water swim followed by a 112-mile bike ride and a 26.2-mile run.

Over 16 hours 46 minutes and 9 seconds, Mr. Nikic, 21, battled dehydration, exhaustion and an unfortunate encounter with a mound of red ants in his attempt to complete the course. “I learned that there are no limits,” he told The Times. “Do not put a lid on me.”

‘English gentleman’: Despite increasing tense relations between Britain and China, Stephen Ellison, the British consul general in Chongqing, was hailed as a hero after a video of his rescue of a drowning woman from a river on Saturday went viral on Chinese social media.

Hate crime: The F.B.I. recorded more than 7,300 hate crimes in the United States last year, the highest number since 2008. The agency also recorded more murders motivated by hate than ever before, an increase largely driven by the August 2019 mass shooting in El Paso, in which 23 people died at a Walmart store.

Hurricane season: This year has seen 30 named storms — 13 of them hurricanes — breaking a record set in 2005, when 28 storms grew strong enough to be named. Hurricane Iota was expected to make landfall on the border of Nicaragua and Honduras on Monday night as a Category 5 hurricane, the strongest rating.

Monster robo-wolves: After wild bears kept venturing into a city on the Japanese island of Hokkaido in search of food, officials installed mechanical wolves with bared teeth, glowing red eyes and a selection of fearsome howls to keep the animals away.

Snapshot: Above, beekeepers in Turkey’s “honey forest,” with its distinctive black beehives. The beekeeping traditions of the Hemshin people are at risk of vanishing amid an exploding tourism industry and the accompanying infrastructure.

‘The Crown’: In the new season of the Netflix show, Diana Spencer’s aristocratic breeding triumphs and Margaret Thatcher’s middle-class tendencies horrify the royals. Here’s a guide to the rigid world of the British class system.

Lives Lived: Bruno Barbey, a French photographer who produced powerful, empathetic work in war zones as well as in peacetime, died earlier this month at 79.

What we’re looking at: The Subpar Parks Instagram page, which puts negative reviews of some of the world’s most beautiful national parks in visuals. Melina Delkic, who writes the Asia briefing, likes this summation of Bryce Canyon National Park: “Too orange, too spiky.” She adds: “In case you needed a reminder that nothing pleases everyone!”

Read: In his new memoir, “A Promised Land,” which goes on sale today, Barack Obama “marshals his considerable storytelling skills to demythologize himself,” writes our book critic.

Invent: Turn to Jacques Pépin, the French-born cookbook writer, for inspiration on how to do more with less.

Stay safe at home but don’t be bored. At Home has a cornucopia of ideas on what to read, cook, watch and do.

Different virus strategies in the U.S. and Europe

As the coronavirus has surged again in recent weeks, much of the U.S. has chosen to keep restaurants open and schools closed. Much of Europe has done the opposite.

The European approach seems to be working better: While both Europe and the U.S. have suffered surges in cases, over the past two weeks France, Germany, Spain and Britain have managed to reduce their growth rates.

What is Europe doing differently? It is cracking down on the kind of indoor gatherings that most commonly spread the virus. England closed pubs, restaurants, gyms and more on Nov. 5 and announced they would remain closed until at least Dec. 2. France, Germany’s regional governments and the Catalonia region of Spain have also shut restaurants, among other businesses.

Many Americans have resisted accepting that reality. Across much of the country, restaurants remain open for indoor dining. Last week, New York State announced a new policy that public health experts consider to be a bizarre middle ground: Businesses with a liquor license can stay open until 10 p.m.

The one indoor activity that appears to present less risk is school, especially elementary school. Why? Young children seem to spread the virus less often than adults do.

Closing schools and switching entirely to remote learning, on the other hand, has big social costs. Children are learning less, and many parents, mostly mothers, have dropped out of the labor force. The U.S. is suffering from both of these problems and from a raging pandemic.

That’s it for this briefing. See you tomorrow.

Thank you
Theodore Kim and Jahaan Singh provided the break from the news. You can reach the team at briefing@nytimes.com.

P.S.
• We’re listening to “The Daily.” Our latest episode is about divisions among American Democrats.
• Here’s our Mini Crossword, and a clue: It’s “mightier than the sword” (three letters). You can find all our puzzles here.
• The word “kaitiakitanga” — a Māori word describing guardianship of the environment — first appeared in The Times on Monday, according to the Twitter account @NYT_first_said.
• Our Washington bureau chief Elisabeth Bumiller recently spoke with Nieman Reports about political reporting in a post-Trump era.