On a recent afternoon, as dusk drew, Christine Lagarde, president of the European Central Bank, was sharing some of the details of her plan to fight climate change, encourage global cooperation and strengthen the credibility of international institutions.

If this scarcely sounded like the traditional agenda of a central banker — more commonly focused on managing European economic and monetary policy — that was at least part of her point.

One year into her eight-year term at the bank, Ms. Lagarde, 64, hopes to use her experience not only as an international lawyer, former French finance minister and head of the International Monetary Fund but as a woman to accelerate change, with a particular focus on saving the planet.

In an interview from Frankfurt on a range of issues, she shared some of the insights she has gained over the years from being one of the few — and sometimes the lone — woman in the male-dominated corridors of financial and political power inherent in global organizations like the Group of 7 or Group of 20.

The conversation has been edited and condensed.

One of your priorities at the European Central Bank is putting together a plan to take on climate change. Do women bring a different set of perceptions to combating the damage it is causing?

I actually think so. I think women bring various powers to the table. One is the power of the purse, because I think that in many, many instances women are the decision makers when it comes to consuming. Second, I think they bring the power of life. I think that actually giving birth gives you a sense of prosperity, heritage, transmission, that is quite special. [Ms. Lagarde has two grown sons.]

I know it’s going to be controversial but I think maternity is central to making sure that our children inherit something that is sustainable, that they can live in, live with and transmit to other generations. I also think that women are resilient, and I think that there are plenty of studies now that are showing that. And resilience in the face of change is something that is very needed.

The United States has its first-ever woman as vice president-elect. Do you know Kamala Harris and do you have any advice for this newest prominent global woman?

I don’t know her. I have observed her from a distance when I was in Washington, and particularly when she was part of the Judiciary Committee hearing in the Senate. And I was very impressed by the sort of surgical approach that she had in her questions, and by her standing and command in that situation. At long last a woman is vice president-elect. I think it’s a cause for celebration and frankly she does not need any advice from me. 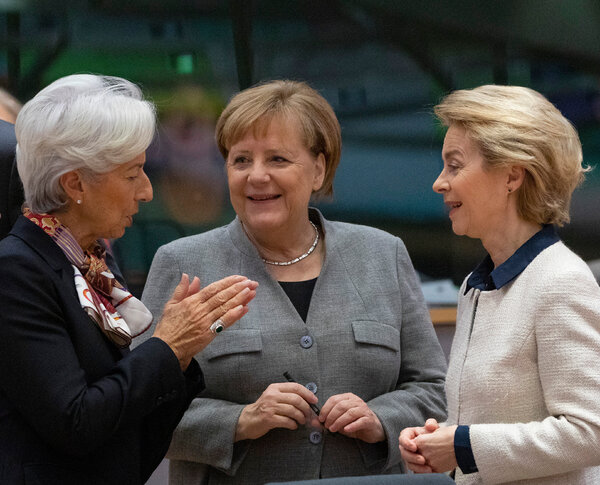 I think that, first of all, it has helped that we know each other quite well, the three of us. And it has facilitated the very rapid exchange of communication without protocol by text messages or telephone calls. So that’s one dimension — easy communication between us. And number two, I don’t think any of us really cared whether we were getting the credit, and whether our ego was first and forward relative to the others. I think that has also helped. So less vanity maybe. And better communication.

How else can you enhance international cooperation, especially in our time of lockdown?

A multinational approach to some of these global issues is needed more than ever. I know this sounds very counterintuitive and probably not politically correct at the moment because it’s more fashionable to argue against globalization, to argue against multilateralism, but frankly we are learning something from the current pandemic. It is that we have to cooperate. It is that we have to disclose to each other what goes wrong. I would say that if the United States can return to the W.H.O. and the W.T.O. [World Trade Organization], and exercise the kind of leadership that is expected from the largest economy in the world, it would be certainly helpful in order to tackle some of the global issues that have no borders.

As you’re well-aware, there are not very many women on the 25-person governing council of the E.C.B. We know that’s a process that you don’t control, but is there anything you can do about it so that when individual countries have an opening for a Central Bank president they look at women candidates?

As you said, it’s something that is decided by governments when they appoint governors for their national central banks. What I can do is when there is a vacancy I can raise my voice. I can pick up the phone. I can impress upon them that it’s a bit ridiculous to have out of 25 members only two women. And thank goodness there are two of us now. And I can take photos like the one I took at a retreat that we had exactly a year ago in November. And at the time there was not even two women on the board. It was just me and 24 men.

How are your plans for the E.C.B. to fight climate change different from the past?

I’m not suggesting that the European Central Bank never did anything about climate change. But I think what I’m bringing to the bank is a sense of urgency and a determination to focus on it. The sense of urgency has already led us to setting up a special hub that will bring together representatives from various business areas of the bank to focus on climate change. So instead of climate change being scattered around randomly, depending on who cares for what, we now have a structured approach.

How would you compare the way you manage the governing council or the meetings to your predecessor, Mario Draghi? How do you see your style?

I don’t want to compare myself with Mario Draghi, and I don’t want to compare myself with men in general. But I know after a few years in those jobs that women are more inclusive than mercurial, more patient than impatient, are more respectful than abrasive. As a result, it often takes more time than it would, was I not patient, inclusive and respectful. You know, I was professionally brought up at an international law firm that actually paid as much respect to the vote and to the voice of somebody who came from Jakarta, from Rome, or from New York. And I think that has saved me, and I think it’s more solid at the end of the day.

Finally, we were wondering whether there are women, famous or not, to whom you have turned for advice or guidance, and what is the best piece of advice you have ever received that helped your career, in your assessment?

One person that I used to turn to for guidance and advice was certainly my mother. She was a clear inspiration and a guide for me. What advice did I receive from her or from others? I would say a couple of things. One is from my coach on the national team. [As a teenager, Ms. Lagarde was on France’s national team for synchronized swimming]. She used to say, you know, ‘Grit your teeth and smile,’ that is something that always stayed with me. ‘Don’t let the bastards get you down,’” is another one.