Trump’s refusal to concede at any cost.

We’re covering the latest from the U.S. election, Prime Minister Boris Johnson’s quarantine and a turning point in Nagorno-Karabakh. 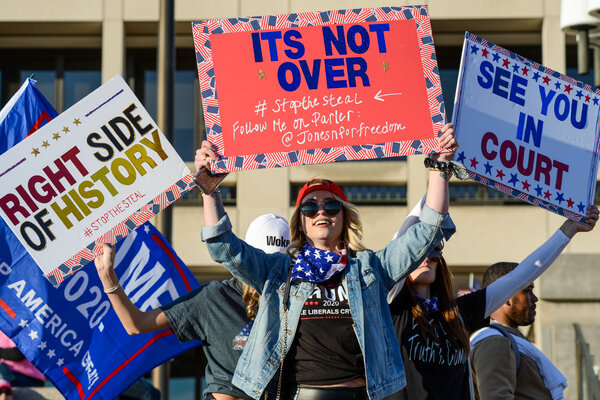 Trump doubles down on claims of election fraud

Even as a growing number of Republicans are calling for an orderly transition of power, President Trump continues to spread baseless claims about election fraud, stoking resistance and unrest among his supporters, thousands of whom protested the election results in Washington on Saturday.

More than a week after Joe Biden was declared the winner in the U.S. presidential election, Mr. Trump continues to block his successor’s transition, withholding intelligence briefings and critical access to the coronavirus task force and other elements of the vast machinery of government that Mr. Biden will soon oversee.

A tweet by the president on Sunday morning appeared to provide some recognition of Mr. Biden’s victory, but Mr. Trump quickly walked back his statement, asserting in a separate post that “WE WILL WIN!” He still maintains, without evidence, that the election was rigged.

Biden looks ahead: With the presidential election essentially in the rearview, Mr. Biden and his team have begun choreographing the policy steps they could take in a government no longer under the direction of Mr. Trump.

A divided nation: Democrats and Republicans face perhaps the most up-for-grabs electoral landscape in a generation, with both parties’ traditional strongholds increasingly under siege.

The president versus the media: Echoing similar concerns to those voiced by Mr. Trump, President Emanuel Macron of France accused the English-language media of “legitimizing" violence and demonstrating a lack of shared values.

A turning point after weeks of war in Nagorno-Karabakh

A deal brokered by Russia has ended weeks of fighting between Armenia and Azerbaijan in Nagorno-Karabakh, leaving Armenians to pack up their houses as they retreat while Azerbaijanis plan a joyful return to long-lost lands.

For Armenians forced to flee, the outcome is a tragedy. Many appeared determined to make resettling the area as difficult as possible, burning homes, destroying infrastructure and disassembling restaurants and gas stations. In Yerevan, the capital of Armenia, police officers in balaclavas detained scores of protesters who accused Prime Minister Nikol Pashinyan of treason for acceding to the peace deal.

For at least the next five years, nearly 2,000 Russian forces will patrol the line between Azerbaijani- and Armenian-controlled regions, in a deal that reasserted Russian influence in the formerly Soviet southern Caucasus.

By the numbers: Since Sept. 27, at least 2,317 Armenian soldiers have died in the conflict. Azerbaijan has not released a death toll.

Quote: “How can I burn this?” said Ashot Khanesyan, a 53-year-old Armenian, referring to the home he had built and was about to desert in the town of Kelbajar. He said his neighbors had urged him to destroy the house but “my conscience won’t let me.”

Seven months after he battled a serious case of Covid-19, Prime Minister Boris Johnson of Britain announced on Sunday that he would be quarantining after coming into contact with a lawmaker later found to be infected.

Mr. Johnson is otherwise conducting business as usual, officials said. “He will carry on working from Downing Street, including on leading the government’s response to the coronavirus pandemic,” his office’s statement said.

Experts say it’s still too early to know how long immunity to the coronavirus lasts, but reinfection with the virus is thought to be very rare for at least many months after the first illness. Mr. Johnson’s office said in a statement that he felt fine and was showing no symptoms.

An adviser to President-elect Joe Biden said the country was “in a very dangerous period” as U.S. officials had reported more than 11 million cases of the coronavirus as of Sunday — by far the world’s biggest caseload.

Mexico has exceeded a total of one million coronavirus cases, the 11th country to do so.

Israel has contracted to buy enough of Pfizer’s coronavirus vaccine to inoculate four million of its nine million citizens. The authorities in the impoverished Gaza Strip announced more than 400 new infections on Sunday, the highest single-day total since the pandemic began.

To survive the pandemic, the famed tailors of Savile Row in London have embraced alterations including digital fittings, ready-to-wear lines and even a brigade of robots.

If you have 6 minutes, this is worth it

How a human rights hero lost her global stature

Daw Aung San Suu Kyi’s party won a landslide in Myanmar’s recent elections, setting up five more years in which she will share power with the military that has ruled the country for nearly 50 years. Above, supporters celebrating in Yangon on Nov. 9.

She remains popular at home, yet it is hard to think of another human rights hero whose global prestige has diminished as quickly. Our reporter looked at her shift from democracy icon to defender of a military accused of genocide.

Belarus: Despite months of mass protests, President Aleksandr Lukashenko has been able to cling to power through a combination of harsh police tactics, hollow promises of reform and the insidious domestic security agency that uses its old Soviet name, the K.G.B.

John Paul II, reconsidered: The former pope was fast-tracked for canonization immediately after his death. But a tarnished legacy in dealing with the church’s sex abuse scandals has left critics to wonder whether it was too fast.

Space X launch: A rocket blasted off from Florida with a capsule carrying four astronauts — three from NASA and one from JAXA, the Japanese space agency — to the International Space Station. After a trip of some 27.5 hours in orbit, the astronauts will begin a six-month stay.

Snapshot: Above, people from the Tigray region in Ethiopia waiting to register at a United Nations refugee center in Hamdayet, Sudan, on Saturday. Prime Minister Abiy Ahmed’s two-year feud with the region’s rebellious ruling party has exploded into a war that threatens to upend the entire Horn of Africa.

Princess Diana: Since “The Crown” began airing on Netflix in 2016, fans have excitedly anticipated Princess Diana’s character. She arrived over the weekend, in the first episode of the show’s fourth season.

What we’re reading: This Twitter thread. “Somebody, somewhere made a joke about turning the animated movie ‘Ratatouille’ into a musical,” said Andrea Kannapell, the Briefings editor, “and this collects some of the amazing young talent coming up with songs.”

Cook: This buttermilk-brined roast chicken is inspired by the Southern grandma method of marinating chicken overnight in buttermilk before frying it.

Listen: Billie Eilish’s “Therefore I Am” and tracks by Foo Fighters, Valerie June and Chris Stapleton make up our pop critics’ latest playlist.

Do: Take a virtual tango lesson, or tour Japan’s stores by phone. As travel begins to tick up, experience companies are adapting to social distancing in new ways.

Get your week off to a good start. At Home has ideas on what to read, cook, watch and do while staying safe indoors.

A ‘little rejoicing’ from our pandemic reporter

Donald G. McNeil Jr., one of our science and health reporters, has been at the forefront of The Times’s coverage of the coronavirus. He spoke to Times Insider about prospects for a vaccine and the latest surge in cases in the U.S. and in Europe.

There’s a lot of optimism around Pfizer’s announcement last week, which suggested its mRNA-based vaccine could be more than 90 percent effective. What should we make of this? Is it too soon to rejoice?

No, I’d say a little rejoicing is in order. The F.D.A. has said it would accept a vaccine that was only 50 percent effective, which is worse than some year’s flu shots, so everyone’s expectations were lowered. This is pretty great. Plus, we were already pretty sure that mRNA vaccines would be harmless. With this type of vaccine, you’re injecting just a short stretch of the virus’s genome packed into a tiny ball of fat with a mild electric charge. In contrast, some vaccines use a whole virus that is killed or weakened and is more likely to cause bad reactions.

Pfizer actually said its vaccine is at least 90 percent effective. We need to be cautious: That was its news release, rather than the actual data, which scientists will want to examine. But I’ve read previous news releases from Big Pharma companies and compared them with the data issued later, and they’ve been honest.

What’s your view on the efficiency of lockdowns?

We need to stop thinking of lockdowns as if they are an end in themselves. A really harsh lockdown — in which people are literally ordered to stay home — pauses transmission long enough for you to launch real tools: rapid accurate testing, rapid contact tracing, isolation of infected people away from their families, and so on.

That’s it for this briefing. Wishing you a joyful start to the week.

P.S.
• We’re listening to “The Daily.” Our latest episode is about President Trump’s refusal to concede the election.
• Here’s our Mini Crossword, and a clue: Capital of Vietnam (five letters). You can find all our puzzles here.
• The word “hyperfuturist” — about a new Lil Nas X music video — appeared for the first time in The Times yesterday, as noted by the Twitter bot @NYT_first_said.
• Azam Ahmed, who became our Mexico City bureau chief in 2015, has won the Michael Kelly Award for covering the brutal cycles of violence afflicting Latin America and the Caribbean “with deeply felt humanity.”