The Conservative Party of Canada is calling on the federal Liberal government to take a harder stance on China and Huawei technologies, leader Erin O’Toole says.

O’Toole’s comments came during an interview with The West Block’s Mercedes Stephenson scheduled to air Sunday at 11 a.m. ET, as his party prepares to put forward a motion calling on the government to ban Huawei and its potential participation in the building of a 5G network in Canada within 30 days.

The Conservative Party is also urging the Liberals to develop a strategy to address Chinese operations within Canada, to address allegations that government actors from China have influenced and intimidated Canadians.

O’Toole said the Liberals “should be honest with Canadians” and the country’s allies and “highlight the risks and the intimidation that hundreds of Canadians and families are feeling from Chinese communist influence operations in Canada.”

“We’re bringing a motion to have a serious public education discussion and make the government take these issues seriously, finally,” he said.

The men were arrested separately in China in 2018, shortly after Canadian authorities in Vancouver detained Meng Wanzhou, the chief financial officer of Huawei, who is wanted in the United States on fraud charges.

Both men have been charged with spying.

However, officials in Canada and the U.S. have called for their release, maintaining the allegations are baseless and arbitrary.

Speaking at a press conference on Friday, Prime Minister Justin Trudeau said over the past several years various countries have been “using agents and various pressure tactics.”

“This is something we have long been concerned about and have taken action on many times over the past years,” he said. “At the same time, however, we’ve seen a shift in the approach that China is taking on its more coercive diplomacy.”

He said China has been responding “more forcefully.”

Trudeau said this is why Canada has “worked very closely” with its allies to “really hold a common front to move together and demonstrate that this behaviour is not something that is either productive for China’s interests in the medium and the long term, but more specifically something that is not acceptable in a country and in a world where the rule of law needs to be respected and held up.”

Asked whether he thinks the country is prepared for any retaliation from China if it were to take a tougher stance, O’Toole said Canada would need to work with its Five Eyes allies to “make sure that we have a counterbalance both in terms of size, economic strength, to counteract the intimidation that Beijing does.” 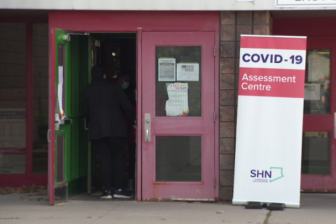 “The more we work with like minded allies, the more we can counteract that influence and reduce their ability to isolate Canada or isolate Australia,” he said. “This is why we have to get in line with our allies.”

“The democratic world is watching for Canada to see if Mr. Trudeau is going to finally get serious with China from a security, human rights and a trade perspective, or is he still going to have this naïve admiration for the basic dictatorship?” he said.

Asked if he would be willing to take tougher steps against China including cutting off foreign student visas or imposing sanctions, O’Toole said his party has “talked about the use of Magnitsky sanctions.”

Under the Magnitsky Act, governments can impose sanctions on foreign individuals who have committed grave human rights abuses or have been involved in significant corruption.

“We can no longer turn a blind eye,” O’Toole said.

He said over the last 20 years, all parties and democratic countries “tried to engage, hoping that China and the WTO and other things would start moving towards respect for the rule of law (and) for human rights.”

“It’s gone the opposite,” he said. “So when things are not working after a generation, it’s time for some leadership to take a different approach.”

O’Toole also alleged Trudeau has been “too close and naïve from day one” when it comes to China.

He pointed to Trudeau’s decision to appoint Peter Harder, who served as the president of the Canada-China business council, to his transition team in 2016, and a $200,000 donation from Zhang Bin, a political adviser to the Chinese government, to the Trudeau Foundation.

O’Toole said what Canadians want is a “more serious, principled leader at home and on the world stage.”

“And that’s what they’ll get with me,” he said.

Global News has reached out to the Prime Minister’s Office for comment regarding these allegations, but did not immediately hear back.

O’Toole’s comments come just over a week after The Associated Press and other major news outlets projected Democrat Joe Biden would be the new president-elect of the U.S.

In a previous interview with Global News, Canada’s Foreign Affairs Minister Francois-Philippe Champagne said the federal government is “going to be working closely” with the new administration on the issue of China and the detained Canadians.