Far-right groups and other backers of Donald Trump plan to rally in Washington on Saturday in a public show of support for his unsubstantiated claim of widespread voting fraud in the 3 November election.

The Republican president has refused to accept that he lost the election to Democrat Joe Biden, now president-elect. The Oath Keepers militia and the far-right Proud Boys have also said their members are attending.

Some left-wing groups are planning counterdemonstrations.

In addition to the Washington event, pro-Trump protests and counterprotests are planned in other major cities around the country.

“Heartwarming to see all of the tremendous support out there, especially the organic Rallies that are springing up all over the Country, including a big one on Saturday in D.C. I may even try to stop by and say hello,” Mr Trump wrote on Twitter on Friday.

Police had warned of potential violence around the election, including from extremist groups, which so far has not happened.

Christopher Rodriguez, Washington’s Homeland Security and Emergency Management director, said his agency was tracking about a dozen groups each made up of “about a dozen” people who had indicated they would attend on Saturday.

“I don’t want anyone to think we are talking about large numbers of folks,” he said at a news conference on Thursday.

He stressed that those attending the rallies would not be allowed to carry weapons.

“Violence will not be tolerated,” he said. 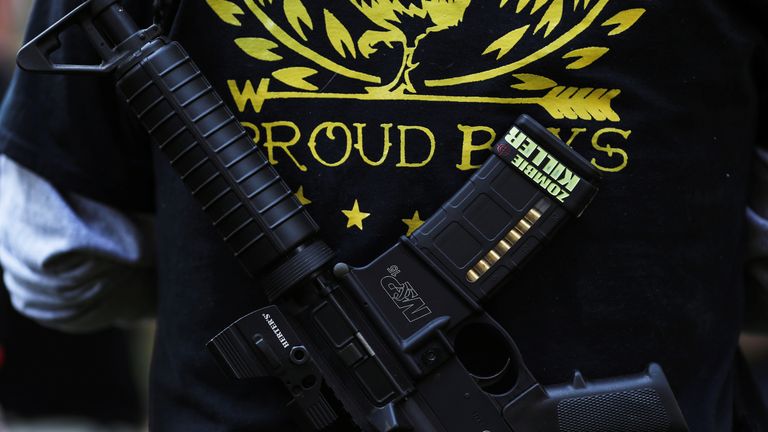 Enrique Tarrio, the Florida-based leader of the Proud Boys, said he expects roughly 250 members to attend the rally. He said he did not expect violence at the event and said the Proud Boys would adhere to local gun laws in the District of Columbia.

Stewart Rhodes, the head of the anti-government and pro-Trump Oath Keepers, said in a statement his group will be “assisting” with security for the rallies.