If Joseph R. Biden Jr. wants to be known as the first climate president of the United States, he will have to engage his biggest rival on the world stage: President Xi Jinping of China.

Mr. Biden and Mr. Xi, though, are locked in a very difficult relationship that makes climate cooperation a bit like a couple in divorce court trying to plan their child’s wedding. And, unfortunately for the American president-elect, he won’t be starting from a position of strength.

Mr. Xi’s China, which on Friday ended days of conspicuous silence on the election result by congratulating Mr. Biden, dominates the production of clean energy goods, including solar panels and electric vehicles.

The Chinese president faces none of the domestic political chaos that confronts Mr. Biden and potentially impedes the president-elect’s ability to implement some of his most ambitious campaign promises on climate change. And Mr. Xi has already deflated Mr. Biden’s ability to project the United States as a climate leader by announcing, in September, an ambitious, albeit vague, target to draw down China’s carbon emissions to net-zero by 2060.

“Kind of trolling the U.S.,” said Alex Wang, a law professor at the University of California, Los Angeles who follows Chinese climate law and policy.

Trolling aside, the world needs China and the United States to get it together in order to minimize the damage of global warming, and to do it quickly, especially considering the momentum that has been lost because of the coronavirus pandemic. Global climate negotiations that had been scheduled to take place this week in Glasgow, where countries were to declare revised targets to tackle climate change, are now postponed by a year because of the virus.

China and the United States are indispensable to those negotiations.

The countries represent the two biggest economies, two leading military powers and the two biggest sources of the climate problem, together producing 40 percent of the greenhouse gases that currently go up into the atmosphere and heat the planet to dangerous levels. So how effectively Mr. Biden and Mr. Xi can pivot their economies away from fossil fuels is crucial to stemming global warming, shaping global markets for clean technologies and nudging other major emitters — India, Indonesia, Russia, and Brazil — to do their part. 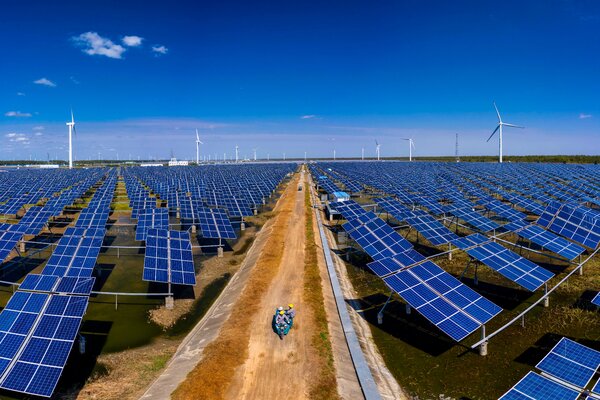 But the relationship between the two countries is at its lowest point in a half century. There’s conflict over trade. China’s human rights abuses are hard for Washington to ignore, and growing nationalist sentiment in both countries makes diplomacy politically tougher.

Kelly Sims Gallagher, who helped organize two major meetings on climate change between former President Barack Obama and Mr. Xi, predicted that collaboration would be difficult but not impossible. She said climate change offered Mr. Biden and Mr. Xi a real opening to work together.

Both aspire to take their countries to a net-zero emissions economy by roughly midcentury, noted Dr. Gallagher, now a professor at the Fletcher School at Tufts University, and both are eager to influence international climate diplomacy. Their converging interests, she and other analysts said, could spur healthy competition over clean energy technology and, in turn, drive down prices of renewable power for the rest of the world.

“I think it is a genuinely possible area of cooperation,” Dr. Gallagher said. “The danger is, if the United States dithers and fails to get its house in order and China solidifies its market position in clean energy. Then we, the United States, lose the opportunity to benefit our economy and our workers from the clean energy economy.”

Analysts of United States-China relations said Mr. Biden would have to make big moves, fast. He would need to one-up Mr. Xi with a more ambitious net-zero target, which means removing from the atmosphere whatever greenhouse gases that the United States emits. He would also have to restore key environmental protection measures gutted by the Trump administration and bolster the American clean energy industry with some combination of regulations and incentives.

Mr. Biden promised to do all this in his campaign, but many of those promises will be extremely challenging to fulfill if the Senate opposes them. He has signaled that addressing climate change will be one of the centerpieces of a raft of policies, from agriculture to transportation. Mr. Biden has also hinted that he would take a tough stance on China on a host of foreign policy issues, and it remains to be seen how effective he can be in bringing traditional United States allies into line for a united front on China.

Perhaps his toughest agenda item, several analysts said, is how Mr. Biden can recast America’s role in the world, including what alternatives the country can offer to the fossil fuel projects that Mr. Xi supports through his signature global infrastructure building program, known as the Belt and Road.

This week, the Biden transition team said the president-elect had discussed climate change in initial conversations with several European and Asia-Pacific allies. Despite the Chinese Foreign Ministry statement on Friday, Mr. Xi has not called on Mr. Biden since the election.

Mr. Xi faces his own tests. China’s emissions continue to grow, even as those of United States have declined significantly since 2005, though falling short of the reductions that the United States had promised under the Paris accord. China’s emissions are on a path to continue growing until 2030; only after that is it expected to decline, and rapidly, according to a government-backed research group.

That’s nowhere near what’s needed to get the world to the ultimate goal of the Paris climate accord, which is to prevent global average temperatures from rising more than 2 degrees Celsius, or 3.6 degrees Fahrenheit, above preindustrial levels by letting countries set their own emissions targets every five years and exerting diplomatic peer pressure on each other to be more ambitious.

An analysis by two research organizations, the Asia Society Policy Institute and Climate Analytics, to be issued next week but reviewed by The New York Times, concludes that China would have to peak its carbon emissions by 2025, five years earlier than the country has promised, and phase out coal by 2040 in order to keep global temperatures close to the upper limits laid out in the Paris Agreement.

The test of Mr. Xi’s climate ambitions rests in large part on China’s next five-year plan, an economic road map for the country that is due in the spring. It remains to be seen how that plan will handle China’s addiction to coal, the dirtiest fossil fuel, which supplies the bulk of the country’s electricity despite its expansion of solar and wind power.

China is the world’s biggest coal consumer. It accounts for the world’s largest fleet of new coal-fired power plants, according to the research and advocacy group Urgewald. Four of the world’s top coal-plant builders are Chinese.

China’s five-year-plan will come out shortly after Mr. Biden comes into office and issues his own road map to re-engineer the American economy for the era of climate change. That, several diplomats and analysts said, could spur a virtuous competition.

“There would be a race to the top of a low-carbon world,” said Byford Tsang, a China specialist at E3G, a London-based research group.