In studying the effects of climate change on hurricanes, scientists have focused on what occurs over water, when storms are forming and strengthening, picking up heat and moisture as they churn over the ocean.

But a new study looks at what happens after hurricanes make landfall and work their way inland. The research suggests that climate change is affecting storms during this phase of their life as well, causing them to weaken more slowly and remain destructive for longer.

The findings could have implications for how emergency-management agencies prepare for storms post-landfall.

In the study, published Wednesday in the journal Nature, Lin Li and Pinaki Chakraborty of the Okinawa Institute of Science and Technology Graduate University in Japan analyzed data from North Atlantic hurricanes that made landfall from 1967 to 2018, looking at the decay in intensity, or wind speed, of the storms in the first day after hitting land.

They found that while 50 years ago a typical storm would have lost more than three-quarters of its intensity in the first 24 hours, when it might travel several hundred miles inland, now it would only lose about half.

“The decay has slowed down tremendously over the last 50 years,” Dr. Chakraborty said in an interview. “There may very well be a climatic link.”

Comparing the data on decay with changes in sea-surface temperatures, and then using simulations of hurricanes moving onto land, the scientists discovered what they say is the link: Rising ocean temperatures linked to global warming are causing the storms to weaken more slowly, even after storms move away from the source of the moisture.

The scientists cautioned that there were caveats to their research, among them that they used a relatively small data set — only 71 hurricanes made landfall over five decades.

One prominent hurricane researcher, Kerry Emanuel of the Massachusetts Institute of Technology, said he was skeptical of the findings. In an email message, Dr. Emanuel said he disagreed with the researchers’ theoretical argument and that the data and simulations, “while suggestive, do not definitively prove the case that decay is slower in warmer climates independent of other factors, such as storm size.”

But other researchers said the study was compelling and opened up a new field of hurricane research, on their behavior over land. Even weakened, winds from these storms can topple trees and power lines, damage homes and cause other destruction well inland. 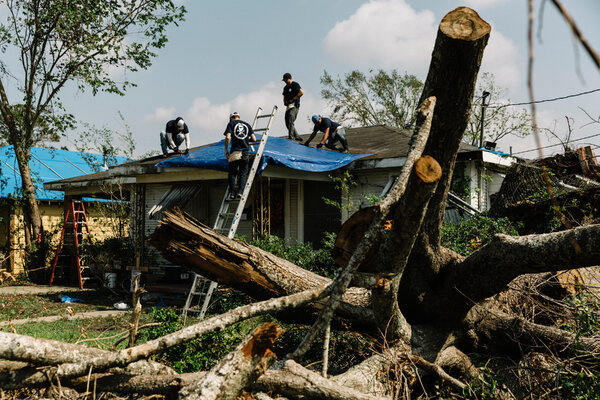 Dan Chavas, an atmospheric scientist at Purdue University who wrote an article accompanying the paper in Nature, said the work was “definitive in identifying a topic almost no one has thought about and could be very important.”

Suzana Camargo, a hurricane researcher at the Lamont-Doherty Earth Observatory, a part of Columbia University, said that she and colleagues published a study last year that showed that stronger hurricanes produced more precipitation after making landfall.

In the new study, she said, “they are saying that moisture stays in the storm for a while, and that completely makes sense with what we saw in our study.”

A hurricane is essentially a heat engine, a rotating storm fueled by moisture from the warm ocean. The prevailing theory as to how hurricanes weaken after landfall is that once they lose that source of fuel, friction with land causes their spinning to slow down.

Dr. Chakraborty likened it to a swirling cup of tea. “Over the ocean, because the moisture supply is there for the heat engine, you’re constantly stirring the tea,” he said. But when it hits land the supply is cut off, the stirring stops and friction causes the swirling to slow

“Importantly, thermodynamics plays no role" in this process of slowing, according to the theory, he said.

“Once we understand that moisture plays a key role, the connection with climate becomes evident,” Dr. Chakraborty said.

Their hurricane simulations allowed them to test the idea that moisture plays a role by creating “dry” hurricanes, without moisture, that decayed much more rapidly than normal ones. The models also allowed them to determine that factors like topography and the weather inland played less of a role in storms’ weakening.

Dr. Camargo said one potential weakness of the study was that the models used were, by necessity, rather simple.

Modeling hurricanes after landfall is difficult, she said. “It’s a hard problem. The models have to capture a lot of things that are going on — the interaction with topography, for instance.”

“I don’t know if what they did in the model is the best way to represent landfalling hurricanes,” Dr. Camargo added. “But at least in this model, it seems to agree with their idea.”

Dr. Chakraborty said he was not surprised there was some skepticism about the findings. “Overall, our study challenges widely-held ideas about hurricane decay,” he said. “I hope this will spur more research and shed new light on this important area that is long thought to be well understood.”