WASHINGTON — When the Federal Reserve voted to “tailor” post-crisis financial regulations for all but the largest banks in October 2019, Gov. Lael Brainard cast the lone “no” vote.

At the long oval table in Fed’s board room, Ms. Brainard laid out — point by detailed point — why she thought the changes risked leaving relatively big banks with too little oversight. It was not an unusual dissent.

Ms. Brainard, a leading contender to be President-elect Joseph R. Biden Jr.’s Treasury secretary, has opposed the Fed’s regulatory changes 20 times since 2018. As the sole Democrat left at the Fed board in Washington, Ms. Brainard has used her position to draw attention to efforts to chisel away at bank rules, creating a rare public disagreement at the consensus-driven central bank.

Yet Ms. Brainard’s position has not relegated her to the role of Fed gadfly. Jerome H. Powell, the Fed’s chair, often praises Ms. Brainard’s intellect in private conversations and has placed her in key roles at the central bank, including tapping her to play a major part in devising and overseeing the Fed’s emergency lending programs. Ms. Brainard joined calls with staff members and Treasury Secretary Steven Mnuchin, the Fed’s partner in planning those efforts, 21 times in April alone.

Mr. Powell, who was appointed by President Trump, even sided with her over the Republican comptroller of the currency when Ms. Brainard argued that a key community banking rule was being rewritten too hastily and based on too little data.

Ms. Brainard’s data-driven approach and quiet persistence have allowed her to maneuver effectively even while staking out a minority position at the Fed. That skill could make her an attractive pick for the Treasury’s top job. So could her experience as a former Treasury official who played a leading role in European debt crisis and Chinese currency deliberations. Negotiating chops would come in handy as the new administration tries to cut pandemic relief deals with what could be a Republican Senate.

But her status as a Washington insider brings its own vulnerabilities. Part of the progressive wing of the Democratic Party paints Ms. Brainard as a centrist who has been timid on climate change and soft on China — too much the good soldier, too little the maverick.

Ms. Brainard has been rumored as a Treasury-secretary-in-waiting for years, and her friends and former colleagues have been out in force praising her qualifications, suggesting that she wants the job. Yet the competition is stiff.

Others rumored to be under consideration include Sarah Bloom Raskin, a former Fed governor who served as deputy Treasury secretary during the Obama administration, and Janet L. Yellen, the former Fed chair. Also circulating on informal lists are Roger Ferguson, the president and chief executive of retirement financial manager TIAA-CREF, who was the first Black vice chair of the Fed; Mellody Hobson, the co-head of Ariel Investments, an asset manager; and Raphael Bostic, the president of the Federal Reserve Bank of Atlanta.

Any of those choices would bring a significant change to the Treasury Department, which has been run by a white man throughout its 231-year history.

No decisions have been made yet, several people close to the Biden transition team said. But Ms. Brainard’s position in Washington’s establishment, and her centrist label, could help her chances of winning confirmation if Republicans retain control of the Senate.

Ms. Brainard, 58, has been steeped in international relations from childhood. The daughter of a Foreign Service officer during the Cold War, she was raised in Communist Poland and Germany before reunification. She wrote her senior undergraduate thesis on utopia, dystopia and social planning — motivated, in part, by her childhood — and then went on to an economics doctorate at Harvard University.

An early foray into government policy came in the 1990s, when she worked for the National Economic Council during the Clinton administration. She then served as the Treasury’s under secretary for international affairs under President Barack Obama. At the Treasury, Ms. Brainard forged a reputation as a perfectionist and a savvy negotiator as she tried to pressure China to allow market forces to guide its currency, and to persuade Europe to pursue a more ambitious economic rescue during the depths of its debt crisis.

“Her breadth of knowledge is just really wide,” said Paige Gebhardt Cognetti, the mayor of Scranton, Pa., and Ms. Brainard’s former aide at the Treasury. “When she sits down, it’s like the U.S. is there, to negotiate hard, but also to listen.”

Ms. Brainard was always “the most prepared person in the room,” during her Treasury years, said Austan Goolsbee, who was working as an economic adviser to Mr. Obama at the time.

Colleagues recall her perched at a meeting table in the Treasury Department during Chinese Strategic and Economic Dialogue meetings, surrounded by thick books of briefing material that she had evidently read in full. When she entered a room for such negotiations, several said, the atmosphere would shift. Nobody questioned that she meant business.

Mr. Obama nominated Ms. Brainard to the Fed in 2014 — a posting that some saw as a temporary stop on her way to Treasury secretary. She was floated as a likely candidate during Hillary Clinton’s 2016 presidential campaign. Ms. Brainard had donated the $2,700 personal maximum to Mrs. Clinton’s campaign, drawing scrutiny and criticism to the politically independent Fed. 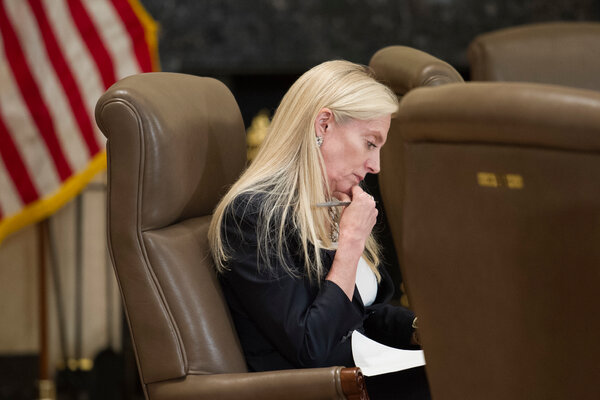 But after Mrs. Clinton lost and Mr. Trump replaced Ms. Yellen, Ms. Brainard found herself as the last Democrat sitting on the powerful board.

Her moves to counter the Trump administration’s regulatory rollbacks have earned praise from progressive groups. But it has not been enough to mollify their concerns that she was too easy on China during her time at the Treasury. They point to the Obama administration’s decision not to label China a currency manipulator while she was the under secretary for international affairs.

“It was her bailiwick and nothing happened,” said Jeff Hauser, the founder and director of the Revolving Door Project. While Mr. Hauser would make it on the record, his complaint is echoed by a small but vocal group on the more liberal side of the Democratic Party.

People who were privy to the negotiations said such criticisms were unfair, noting that Ms. Brainard pushed hard to secure commitments against the devaluation of China’s currency behind the scenes. She also lacked unilateral power to name China a manipulator — while she could weigh in, that decision ultimately falls to the Treasury secretary and the president. But progressives have argued that Ms. Brainard should have pushed publicly for the Obama administration to take a louder stance.

Mr. Hauser said that if she is nominated, it is imperative that her husband, the former Obama-era diplomat Kurt Campbell, divest himself from the Asia Group, the Asia Pacific-focused advisory firm that he founded. While it would be legal for him to retain his position, it could arguably put him in place to profit from his wife’s high-ranking government role.

Despite her decades in Washington, Ms. Brainard is hardly a household name. She has kept a relatively low media profile at the Fed. She rarely discusses her visits to Capitol Hill, and her community outreach trips often include press-free stops. She did not agree to be interviewed for this profile.

The quiet approach lines up with her low-key and matter-of-fact demeanor, based on more than a dozen interviews with former colleagues who have worked with her across government agencies. During Europe’s rapidly escalating debt crisis, she and an aide took a flight to Brussels before they had time to firmly establish meetings with European finance ministries, setting them up over espressos at the airport coffee shop.

Maintaining a degree of privacy could turn out to have been a good strategy. Ms. Brainard has managed to remain relevant even as the Democratic Party evolves to become more skeptical of globalism and free markets.

But Ms. Brainard can be outspoken when it suits her goals. In addition to criticizing the Fed’s deregulatory bent, she has made speeches and statements about climate risks to the financial system in recent months and years — countering a liberal complaint that she has not been aggressive enough in that domain. The Fed assessed climate change risks in detail in a financial stability report this week, a first for the twice-yearly document, and she put out a statement alongside the release.

Tags: Banking and Finance US Economy