WASHINGTON — More than 24 hours after President-elect Joseph R. Biden Jr. was declared the winner of the election, the nation’s Republican leaders and scores of party lawmakers refrained on Sunday from acknowledging his victory, either remaining silent or encouraging President Trump to forge ahead with long-shot lawsuits to try to overturn the results of the election in battleground states.

Even as some prominent figures in the party including its only living former president, George W. Bush, publicly congratulated Mr. Biden, the vast majority of Republicans declined to offer the customary statements of well wishes and support for the victor that have historically been standard in American presidential elections. Instead, they followed the lead of Mr. Trump, who has refused to concede and claimed that the election was stolen from him.

Their reactions suggested that even in defeat, Mr. Trump maintained a powerful grip on his party and its elected leaders, who have spent four years tightly embracing him or quietly working to avoid offending him in a way that could alienate his loyal base. For many prominent Republicans, the president’s reluctance to accept the election results created a dilemma, making even the most cursory expression of support for Mr. Biden seem like a conspicuous break with Mr. Trump.

Senator Roy Blunt of Missouri was the most senior Republican to suggest that Mr. Trump had lost and cast doubt on his allegations of a stolen election, but he stopped short of referring to Mr. Biden as the president-elect in an exceedingly careful television interview.

“It’s time for the president’s lawyers to present the facts, and it’s time for those facts to speak for themselves,” Mr. Blunt, the chairman of the Rules Committee, said on ABC’s “This Week.” “It seems unlikely that any changes could be big enough to make a difference, but this is a close election, and we need to acknowledge that.”

“I look forward,” Mr. Blunt added, “to the president dealing with this however he needs to deal with it.”

At the White House, there was little indication that Mr. Trump was dealing with it at all. As he played a second consecutive day of golf at his private club outside Washington, the president recirculated a groundless claim by Newt Gingrich, the former Republican speaker of the House, who told Fox News, “I think that it is a corrupt, stolen election.” 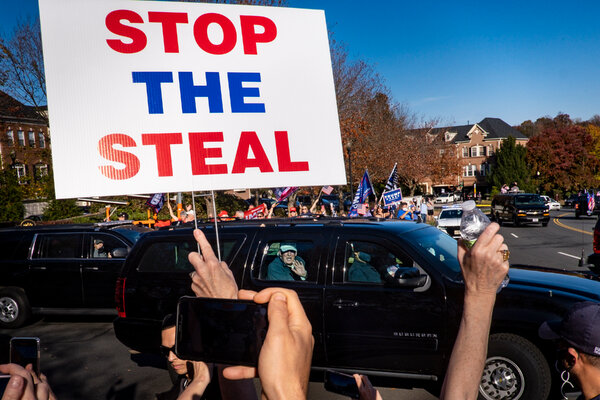 Privately, the president’s advisers, several of whom have quietly been candid that the chances of success in any challenge to the election outcome were not high, were grappling with how to get him to bow to the reality that he had lost.

On Friday, a large group of them met with the president in the Oval Office to discuss the way forward. After another meeting at Mr. Trump’s campaign headquarters on Saturday, where political aides laid out the small chances of changing the outcome of the race, Jared Kushner, the president’s senior adviser and son-in-law, asked the group to go to the White House to outline it for Mr. Trump, according to people briefed on the meeting.

The silence from many leading Republicans cut both ways for the president. While it allowed Mr. Trump to continue the fiction that he had not lost, it also left him to battle against the election results without the full, vocal support of his party behind him. Senator Mitch McConnell, Republican of Kentucky, has declined to say anything since Friday, before the election results were known, when he released a generic statement encouraging officials to “count all the votes.” No member of his leadership team has either, apart from Mr. Blunt’s carefully worded statements on Sunday.

At the same time, just two Republican members of the Senate — Mitt Romney of Utah and Lisa Murkowski of Alaska — and a handful of members of the House had acknowledged Mr. Biden’s win by Sunday afternoon, while others were trying to cast doubt on the results.

“Every legal challenge should be heard,” said Representative Kevin McCarthy of California, the House minority leader. “Then and only then will America decide who won the race.”

Speaking on Fox News, Mr. McCarthy questioned why news media outlets had called the presidential race for Mr. Biden, who was leading by tens of thousands of votes in key battleground states, before drawing a conclusion about undetermined contests in competitive House districts — many of those in deep-blue California and New York — where thousands of mail-in ballots remain uncounted.

“Why would you call the presidential race first?” he asked.

“Do not accept the media’s declaration of Biden,” Mr. Graham, the chairman of the Judiciary Committee, said on Fox News on Sunday morning. He called the election “contested” and urged: “Do not concede, Mr. President. Fight hard.”

Those comments reflected the advice of some of Mr. Trump’s top advisers, chiefly Rudolph W. Giuliani, his personal lawyer, who were urging him on Sunday to continue to fight the results.

A remarkably small number of Republicans called for the country to move on.

“Though we have political differences, I know Joe Biden to be a good man, who has won his opportunity to lead and unify our country,” Mr. Bush said in a statement.

They included the centrist Representatives Tom Reed of New York and Fred Upton of Michigan; Representative Adam Kinzinger of Illinois, who has been an outspoken critic of Mr. Trump; and four lawmakers who will not be returning to Congress next year: Representatives Paul Mitchell of Michigan, Will Hurd of Texas, and Francis Rooney of Florida, who are retiring, and Representative Denver Riggleman of Virginia, who lost his primary this year.

Representative Don Young of Alaska, whose race remains undecided after a more difficult than expected re-election bid, said he wished “the president-elect well in what will no doubt be the most challenging chapter of his political career.”

“It is time to put the election behind us, and come together to work for a better tomorrow for our nation,” Mr. Young said in a statement.

On “Fox News Sunday,” Mr. Romney provided a contrast to many of his Republican colleagues. He said that he believed it was “appropriate” for Mr. Trump to pursue recounts and legal challenges in certain battleground states, but cautioned against widespread condemnations of the American system of elections.

“It’s important for the cause of democracy and freedom that we don’t allege fraud and theft and so forth, unless there’s very clear evidence of that,” Mr. Romney said. “To date, that evidence has not been produced.”

Mr. Romney noted that he had had a legal team ready to challenge the results of the 2012 election when he was the Republican nominee, but decided not to go forward once he saw such efforts would be futile.

“At some point, truth, freedom and democracy have to ascend,” he said, “and you step aside.”