On the campaign trail in 2016, Donald J. Trump promised to roll back regulations he said were stymying American businesses and Wall Street. Once elected, he chose agency heads willing to carry out those promises.

For banks and other financial firms, that brought a cast of characters including Treasury Secretary Steven Mnuchin, Federal Reserve Vice Chair Randal K. Quarles and Comptroller of the Currency Joseph Otting. Working from a blueprint drawn up early in the administration, they and other regulators eased restrictions on the finance industry, including those that had been put in place by the Obama administration after the 2008 financial crisis.

Some of the changes were small, but together they amount to a significant regulatory shift. Financial firms now face lesser consequences for taking too much risk or abusing customers, which could pave broader paths to a new financial crisis, critics say.

Here’s a look at some of the changes under President Trump.

Payday lending: In late 2017, the Consumer Financial Protection Bureau finalized tough new restrictions on payday lending that would have prevented most customers from repeatedly re-borrowing, a pattern that can trap borrowers in a cycle of debt. But a director appointed by Mr. Trump, Kathleen Kraninger, took over the bureau in 2018 and delayed the new restrictions from taking effect. This year, she rescinded them. A coalition of consumer advocates filed a lawsuit last week challenging the legality of Ms. Kraninger’s actions.

Rent-a-bank rules: Many states have caps on the interest rate that lenders can charge on loans. But there’s a catch: Lenders can skirt the rule by partnering with a bank in another state — one without rate caps — and having that bank issue its loans. The bank then sells the loan to the lender. The tactic, often used by online lenders, is known as “rent-a-bank,” and the Office of the Comptroller of the Currency — under Brian P. Brooks, the acting head of the office — finalized two rules this year, one in May and one last week, affirming that the maneuver is legal. The Federal Deposit Insurance Corporation also issued a rule in June giving the arrangement a green light. (Both the F.D.I.C. action and the O.C.C.’s May rule have been challenged by state attorneys general in lawsuits that are pending.)

Fiduciary rule rollback: The Obama-era Labor Department imposed a rule that would have forced financial advisers and brokers handling retirement and 401(k) accounts to act as “fiduciaries,” a legal standard that requires putting customers’ interests first. But in 2018, a federal appeals court ruled that the agency had overstepped its authority, and the Trump administration didn’t challenge the decision, which killed the rule. One silver lining for consumers: Some economic research has found signs that the high-profile fight over the rule, and the increased attention it brought to how brokers are compensated, led the financial-services industry to alter its behavior and reduce brokers’ incentives to push costly retirement products.

Debt collection rules: The C.F.P.B. finalized new debt-collection rules last week that will, for the first time, let collectors contact borrowers through text messages, emails and social media direct messages. Electronic messages will be required to include an opt-out option. Collectors say the long-sought change will make it easier for them to reach borrowers; consumer advocates fear it will unleash a fresh barrage of intrusive communications. The new rules added one new protection for consumers: Collectors, who are notorious for their deluge of phone calls, will be limited to seven calls per week to a borrower.

Tracking bias in home loans: This spring, citing the “operational challenges” banks and other mortgage lenders were facing as a result of the coronavirus pandemic, the C.F.P.B. announced that it would stop collecting detailed data on new mortgages, including information about the borrower’s race and location, which researchers and community groups say is crucial to ferreting out discrimination in home lending. Democratic lawmakers have asked the agency to start collecting the data again, but so far it has not done so.

The Community Reinvestment Act: In May, the F.D.I.C and the O.C.C., which regulate banks, revised their requirements for those institutions to do business in low-income and minority communities, despite objections from Fed officials. It was a rare regulatory split caused chiefly by a concern that the new methods did not make sense and could allow banks to win credit for activities that had little meaningful impact on the communities they are required to serve.

Blocking discrimination claims: The Department of Housing and Urban Development makes the rules for identifying and stopping discrimination by landlords and mortgage providers. One such rule governs the concept of “disparate impact,” where the policies of a landlord or a bank may unintentionally disadvantage a Black or Latino person seeking a home loan or trying to rent an apartment. In August, H.U.D. finalized a rewrite of the requirements for bringing “disparate impact” claims that critics said would immediately invalidate almost all potential claims. The change, although meant to benefit financial firms, was so drastic that banks, insurance companies and other big firms took the unprecedented step of asking the department not to go through with it. 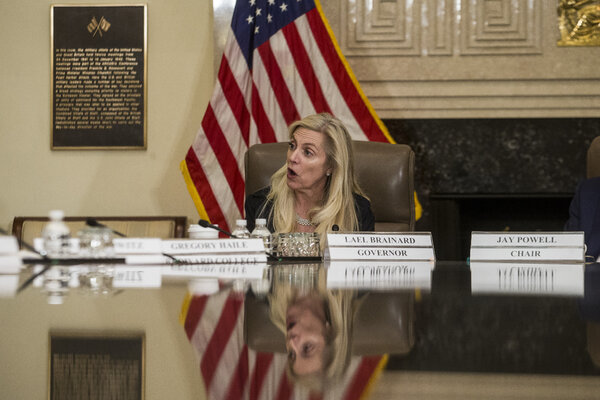 Volcker Rule: The Volcker Rule was created as part of the Dodd-Frank law to prevent banks from taking risky bets in the financial markets for the sake of profit. It stipulated that banks could trade only on behalf of their customers and required them to start keeping records to prove their compliance. This year, the Fed and its fellow regulatory agencies changed the rule to allow banks to invest heavily in venture capital funds — which make bets on start-ups or high-growth businesses that are risky by nature — and credit funds, which invest in corporate debt. Critics said the change represented the first step toward letting banks make their own risky bets again, even if no customers were asking them to do so.

Capital requirements: Banks are required under Dodd-Frank to hold a certain amount of capital in reserve as a buffer against crisis. Bank executives dislike high capital requirements, which force them to limit stock buybacks and dividend payments, both of which can help lift share prices. Mr. Quarles, the Fed vice chair for supervision and a Trump appointee, has favored regulatory tweaks that give banks more certainty about their future capital requirements. Critics say that over time, having that certainty could allow banks to reduce the amount of capital they actually hold, since many had held extra capital to avoid big swings from year-to-year.

Last year, Mr. Quarles, a former private equity investor, instituted greater transparency around bank stress tests, which assess how their capital would hold up against a shock. More recently, the Fed streamlined the process for setting capital requirements, including tweaks that Governor Lael Brainard said might allow some banks to lower their buffers.

Tailoring: It isn’t just the biggest banks that have gotten a regulatory break under the Trump administration. Smaller institutions, including banks that are sometimes called “super-regional,” have also benefited. An October 2019 “tailoring” rule reduced risk-related compliance requirements for banks with up to $700 billion in assets. While much of that was mandated by legislation, the Fed extended the break to firms including Capital One, PNC Financial and U.S. Bancorp.

Supervision: Bank supervision — the act of applying rather than just setting the rules — is one of the most important functions of the Fed. Under the Trump administration, a quiet, but potentially profound, shift is underway that could eventually limit the role of supervisors. Currently, supervisors have wide discretion and have sometimes applied rules strictly. Mr. Quarles has suggested that lawyers should look into whether they have too much leeway.