Joe Biden has hit out at Donald Trump’s inflammatory and unfounded suggestions of voter fraud in the US election. The Democratic candidate did so during his latest speech, in which he confirmed that his campaign was feeling very confident about their chances of winning the presidency. Mr Biden also detailed gains he had made in key swing states, Wisconsin and Michigan, comparing them to President Trump’s 2016 result. 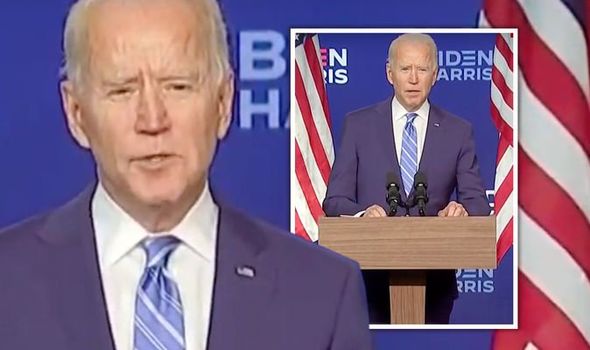 “I’m not here to declare that we’ve won, but I’m here to report that when the count is finished, we believe that we’ll be the winners.

“Of all the votes counted, we have won Wisconsin by 20,000 votes, virtually the same margin that President Trump won that state four years ago.

“In Michigan, we lead by over 35,000 votes, and it’s growing. A substantially bigger margin that President Trump in 2016.”